The Scary Parallels Between Trump and Mussolini

Mark Bickhard is Henry R. Luce Professor in Cognitive Robotics and the Philosophy of Knowledge in the Department of Psychology at Lehigh University (Bethlehem, PA). 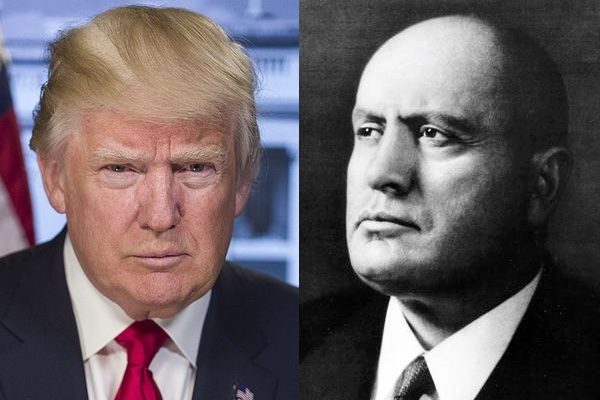 Comparisons between Trump(ism) and Fascism have become frequent, and with good reason. These comparisons are strongest between Trump and Mussolini — stronger than with Hitler and Nazi-ism. Detailed comparisons are difficult for at least two reasons: 1) the historical circumstances are quite different between the 20s and 30s and today, and 2) Fascism was never a coherent political theory or philosophy, but, instead, was a populist and nationalist development in Italy that Mussolini did not create, but did take over.

A comparison between Trump and Mussolini in terms of character and style, however, is frighteningly strong — and does give some guidance concerning future concerns. This comparison is based primarily on quotes from a book about Mussolini by R.J.B. Bosworth (2010). In general, the quotes speak for the themselves, though I will add some commentary along the way. It should be noted that this book was published years before similarities between Trump and Mussolini became politically relevant, and, thus, were not written with Trump in mind.

I begin with Trump’s arrogant ignorance and incoherence:

“Other more critical contemporaries noticed instead the fluctuations in Mussolini’s ideas and the way he preferred to avoid in-depth conversations, sometimes excusing himself by saying that the details should be left to the experts. Here, they discerned, was a leader more interested in imposing his will than in harmonising his attitudes or policies. Here was a politician more interested in seeming to know than in knowing.” pg 142

“He understood that a totalitarian dictator had to be, or to seem to be, expert in everything.” pg 177

“Cowing the press was only one part of building a totalitarian dictatorship.” pg 177

Bosworth points to a later developing ambition for Mussolini that is not yet overt with Trump — but it has already been hinted at by some in his inner circle:

“The real novelty of his ambition lay in his pretensions to enter the hearts and minds of his subjects, and so install Fascism as a political religion.” pg 177

Again, Trump’s ambition combined with a lack of coherence:

“ ‘Reactionary dictators are men of no philosophy, no burning humanitarian ideal, nor even an economic program of any value to their nation or the world. [George Seldes]’ They were ‘gangsters’ more than anything else.” pg 246

Trump, of course, is infamous for his ultra-thin skin:

“… he would flick through the French press and grow enraged at any criticism of Italy and himself.” pg 272

“… there were few things which annoyed Mussolini more than overt criticism.” pg 276

“This emotion [anger] had always been a prominent part of the Duce’s reaction to life .…” pg 280

“The Duce’s version of permanent revolution, it was increasingly plain, was more a story of his own permanent sense that the rest of human kind was not made in this own image (an arrogance which only partially cloaked his own sense of inadequacy …).” pg 282

“… it was plain that he [Augusto Rosso] was another who feared that Ciano [son-in-law] was very young, and very inexperienced in the real world, and who knew that Mussolini did not take his professional diplomats seriously.” pg 292

“In his diary, Bottai depicted a war leader whose administration grew steadily more ‘approximate’, with the Duce, a ‘man of the banner headline’ at heart, now bored by detail or discussion and preferring to ‘let things run of their own accord’.” pg 302

“… the Duce’s reaction, Bottai complained, was, ‘if things go well, take the credit; and, if they go badly, to blame others’. This, Bottai concluded, had become the real meaning of the formula: ‘Mussolini is always right.’ ” pg 303

The following speaks for itself, and speaks volumes:

From A.J.P. Taylor, quoted in Bosworth: “Fascism never possessed the ruthless drive, let alone the material strength, of National Socialism. Morally it was just as corrupting — or perhaps more so from its very dishonesty. Everything about Fascism was a fraud. The social peril from which it saved Italy was a fraud; the revolution by which it seized power was a fraud; the ability and policy of Mussolini were fraudulent. Fascist rule was corrupt, incompetent, empty; Mussolini himself a vain, blundering boaster without either ideas or aims.” pg 344

Here from a different book, Mussolini and Italian Fascism (2008), by Giuseppe Finaldi:

“Thus Fascism, as it developed in 1920-2, was not a political party, with a programme and an internal structure headed by Mussolini who sent proselytizing disciples into the provinces, but a catch-all movement that, loosely speaking, would have met with the approval of many who saw themselves as belonging to the very widespread political and social environment of the Vitterio Veneters [a nationalist movement]. The ingredient that was (almost) unique to Fascism and which gave it an edge over traditional patriotic parties was its willingness to employ violence for political ends. Its ability to give a semblance of political coherence and a plausible set of symbolic reference points to what was essentially reactionary vigilantism allowed the process of law and the functioning of democracy … to be sidestepped with panache.” (pg 37)

Just as Mussolini took over the Fascist movement, Trump is exploiting and taking over the ultra-nationalism/alt-right movements. These are the power bases for two dictatorial personalities.

Two additional comparisons —one with with Hitler and one with Putin — are also relevant here. Hitler and Nazi-ism have both similarities and differences with Trump and Trumpism, but both include the style of creating multiple competing power centers, to be adjudicated by the ultimate authority. This not only creates chaos, it also encourages striving to produce the positions, actions, and proposals that will most powerfully capture what the Leader will bestow favor upon. It nurtures what came to be called “Working toward the Fuhrer.” It is a formula for extremism.

Violence is central to the history of all of these movements, and both Hitler and Mussolini came to their dictatorial powers via a relatively singular act of violence: the Reichstag fire for Hitler and the Fascist march on Rome for Mussolini.

Putin, however, demonstrates a different path. Violence, even Putin-directed lethal violence, has been a central part of Putin’s creation of his dictatorship, but there has not been any single violent event that generated his power. Instead, Putin’s history has been one of constant undermining and destruction of competing institutions and individuals, to the point that there are no longer any checks on his power. We have already seen major attacks by Trump on the judiciary, the press, and moves to undermine and take over the institutions of public safety. The seditious partisanship of the Republicans in Congress ensures that the legislative branch will not be a check — unless that blind support is somehow itself changed.

The attacks on central institutions of American democracy as “enemies of the people” has a horrible and horribly dangerous historical background. Trump may (or may not) be too ignorant to know of that background, but his inner circle most certainly knows of it, and intends it in full.

And, of course, all of this is in addition to the subversion of American democracy and of the Trump administration by Putin’s Russia.

We live in dangerous times.