What Trump, Le Pen and Putin Are Selling 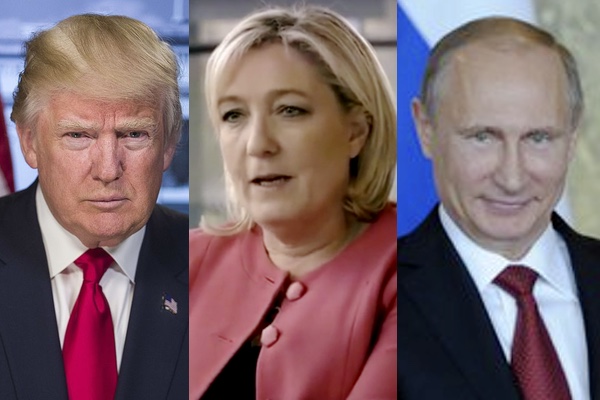 “The easiest way to win votes these days is by selling the past.” So says “Politics Goes Back to the Future” (3/02/2017) in Britain’s The Financial Times (FT). And it links the “nostalgic nationalism” of Donald Trump’s “Make America Great Again” with Brexit’s “Take Back Control” and “Vladimir Putin’s reassertion of Russian power”—see here on Putin’s nationalistic use of the past. The FT article also mentions the resurgence of nostalgic nationalism in France, where Marine Le Pen heads the right-wing National Front party. But it noted that the 39-year-old Emmanuel Macron, an independent centrist who now seems likely to be Ms. Le Pen’s chief rival in the 2017 presidential election, contrasts with Le Pen by being more a “futurist.”

A few months earlier another FT article also mentioned China and Turkey as places where “nostalgic nationalism” had gained traction. Other sources have written about it in contemporary Hungary and Austria. In November 2016, a New York Times piece stated that the successful Polish politician Jarosław “Kaczynski and his followers have [recently] moved with astonishing speed . . . in hopes of deflecting Poland from the orbit of Western Europe and returning it to a past defined by family, church and home.”

What is happening at present in various parts of the world is a reaction against globalization, immigration, terrorism, and other phenomena that are changing people’s worlds faster than they can cope with, all encouraging nostalgic nationalism. In some ways it reminds us of the turn toward right-wing nationalism in Europe during the 1920s and 1930s, as the threats of communism and economic dislocation (unleashed by World War I and the Great Depression) disoriented large numbers of people, making them more susceptible to the appeals of Mussolini, Hitler, Franco, and some eastern European leaders with their toxic mix of ideological brews appealing to the disoriented and fearful.

Donald Trump’s nostalgic nationalism—“make America great again”—appeals to a similar mindset. Here is writer George Saunders’s insightful depiction of Trump supporters in mid-2016. “They loved their country, seemed genuinely panicked at its perceived demise, felt urgently that we were, right now, in the process of losing something precious. They were, generally, in favor of order. . . . Some (far from all) had been touched by financial hardship.” Many believed “they’d been let down by their government. They were anti-regulation, pro small business,” and sensitive to “any infringement whatsoever on their freedom. . . . They were adamantly for law enforcement and veterans’ rights.” Saunders believes that many Trump supporters suffer from what he calls “usurpation anxiety syndrome,” which he defines as “the feeling that one is, or is about to be, scooped, overrun, or taken advantage of by some Other [like illegal immigrants] with questionable intentions.”

Trump’s biggest group of supporters are older white men, many living in smaller cities and towns and rural areas. Many of them feared that the American Dream was being threatened. Five years ago Jon Meacham, biographer of Thomas Jefferson and Andrew Jackson, identified this dream as “the perennial conviction that those who work hard and play by the rules will be rewarded with a more comfortable present and a stronger future for their children.” Like Alexis de Tocqueville and many other observers of America, Meacham thought that for most of U. S. history its citizens were forward-looking and optimistic, especially as contrasted with Europeans, who were more traditional and mindful of the past. As Max Lerner wrote in America as a Civilization (1957), “The theme of promise has been America's great ‘social myth.’ `````” But already in 2012 Meacham perceived that the dream was being threatened and that “the American political system shows no sign of reaching solutions commensurate with the problems of the day.”

Nostalgia for supposedly better days and greater national prestige, coupled with fear of new forces—whether immigrants, minorities, terrorists, globalization, new technologies, or whatever else may appear—may motivate voters to support a Trump, Le Pen, or Putin, just as many supported right-wing forces in Europe in the 1920s and 1930s. But we all know, including authoritarian leaders, that there is no going back, that like it or not we continue to change ever more rapidly as the twenty-first century advances.

In the face of this rapid change and all the challenges it presents, what should our attitude toward the past and future be? As historians and lovers of history, many of us may be more appreciative of the past than our other fellow citizens. And the temptation to resist changes that unsettle us is strong and not without merit.

We often call those resisting technological change “Luddites,” after the early nineteenth-century English workers who broke up textile machinery that they believed were costing them jobs. But it is not hard to be sympathetic with them or the Romantic poets who decried the negative effects of the Industrial Age, or Thomas Carlyle, who feared that “men are grown mechanical in head and in heart, as well as in hand.”

Later in the nineteenth century and up to the present, there have been others who have decried many of the effects of the Industrial Revolution begun in England in the 18th century. Two such men are the Russian Leo Tolstoy and our modern writer Wendell Berry, who has been referred to as a “cranky Luddite” and who once wrote an essay entitled “Why I Am Not Going to Buy a Computer.” Another critic of modern industrial systems, whether capitalist or communist, was the economist and environmentalist E. F. Schumacher. In his influential book of the early 1970s, Small Is Beautiful, he furnished five reasons why he thought modern industrial society should fail, including environmental, societal, and moral ones, including the breeding of violence. (See here for numerous links concerning these three men.)

Yet, despite the numerous ethical and other insights of these individuals—and they are many—it seems wise to accept the advice of psychologist, futurologist, and wisdom scholar Thomas Lombardo, who urges us to “thoughtfully and purpose-fully contribute to the ongoing evolution of ourselves individually, and of humanity, nature, and the cosmos.” While realizing the value of studying the past—“Memory of the past . . . is the knowledge foundation for both present and future consciousness, as well as wisdom”—Lombardo believes that that the most central question of our life is, “How do we create a good future?” To do so, we need a “thoughtful understanding of trends, challenges, opportunities, and future possibilities,” a comprehension enriched by our knowledge of the past.

Such a future orientation does not mean that we must accept all aspects of our evolving technological society, where we follow the advice of a mid-1950s U. S. marketing consultant who said:  “Our enormously productive economy . . . demands that we make consumption our way of life, that we convert the buying and use of goods into rituals, that we seek our spiritual satisfactions, our ego satisfactions, in consumption. . . . We need things consumed, burned up, worn out, replaced, and discarded at an ever increasing rate.”

No, instead we may work for a more sustainable economy and society, one that is more eco-friendly. Lombardo urges us to aim to create “An Age of Wisdom,” and certainly such an age demands respect for our environment as Pope Francis and others have urged upon us. It also demands a more equitable and compassionate and less violent world. How we get there is an open question.

People like E. F. Schumacher and Wendell Berry encourage small local steps that resist large-scale industrialization and agriculture. One way of resisting the 1984 or Brave New World futures that some fear President Trump is bringing closeris to encourage diversity and experiments. Bringing about a wiser world will require all the creativity, imagination, and courage we can muster, and it will necessitate learning valuable lessons from our past. It will also require overcoming the “nostalgic nationalism” that appeals not to the best in us, but only to our fears and insecurities.