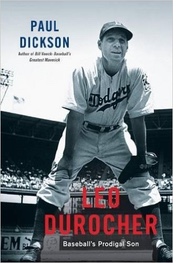 Baseball in the spring is the source of eternal optimism. In the sunshine of the sport’s spring training, every Major League club appears to have a chance to make it to the World Series. However, there is also a dark history to the self-proclaimed national pastime, and this malevolent side is represented by Hall of Famer Leo Durocher. Perhaps best known for his comment that “nice guys finish last,” Durocher as a player and manager was legendary for his epic confrontations with umpires, fans, reporters, opposing players, teammates, club owners, Baseball Commissioner A. B. “Happy” Chandler, and four wives.

Although born into a family of modest means, Durocher developed a taste for life in the “fast lane,” gaining a reputation for gambling, fighting, spending lavishing on his personal wardrobe, and hanging out with celebrities such as George Raft and Frank Sinatra. In fact, allegations regarding gambling and his personal life led Commissioner Chandler to suspend Durocher for the 1947 baseball season.

Durocher’s controversial career and abrasive personality earned him many enemies in baseball, and he was not elected to the Baseball Hall of Fame until after death, despite having managed the Brooklyn Dodgers and New York Giants to three National League pennants in 1941, 1951, and 1954 before achieving a World Series victory over the Cleveland Indians with the Giants in 1954. As a manager in twenty-four seasons with four clubs, Durocher won over 2,000 games. One of the most controversial figures in the history of the game, Durocher’s turbulent life and career is presented in a balanced and often sympathetic biography by Paul Dickson.

The prolific Dickson is somewhat of an unusual choice to author a biography of the caustic Durocher. In addition to popular histories of the Bonus Army and Sputnik, Dickson has written a well-received biography of one of baseball most believed figures; maverick owner Bill Veeck who with the Cleveland Indians in 1947 integrated the American League by signing Larry Doby. While no racist, Durocher did squabble publicly with Jackie Robinson; providing some aid and comfort to those who opposed Robinson’s presence in the Major Leagues. While acknowledging the abrasive aspects of Durocher’s character, Dickson, nevertheless, concludes that Durocher was an enigmatic figure who was capable of considerable generosity as well as small-minded arrogance. In the final analysis, Dickson argues that Durocher loved the game of baseball, and his managing skills well qualified him for enshrinement in Cooperstown.

Dickson’s biography is based primarily upon an extensive reading of newspaper archives chronicling Durocher’s controversial life and career. In addition, Dickson makes good use of manuscript collections containing the papers of Branch Rickey, Jackie Robinson, and journalist Arthur Mann.

While Durocher authored several autobiographical accounts, he neglected to provide much information regarding his early years. We know that Durocher was born on July 27, 1905 in West Springfield, Massachusetts to a French-Canadian family of modest means. Durocher failed to graduate from high school and briefly worked in a factory before pursuing his passion for a career in baseball. With this limited background information and the lack of any Durocher papers and correspondence, the biography is often dependent upon second-hand accounts, and readers rarely directly encounter Durocher’s voice. Although sources place a restraint upon psychological interpretations of the temperamental Durocher, Dickson does suggest that the baseball great was driven by an inferiority complex that led him to overcompensate in a competitive zeal displayed on and off the baseball diamond. Thus, Durocher believed in winning by any means necessary whether it was baseball, gambling, or pursuing women. Perhaps seeking to escape his humble origins, Durocher dressed well and lived beyond his means; incurring considerable debt.

After a brief sojourn in the minor leagues, Durocher joined the New York Yankees on a full time basis in 1928. The shortstop was an exceptional fielder, but his hitting was average at best. With their outstanding roster, the Yankees could afford the good field/no hit shortstop, and Durocher contributed to the championship Yankee teams of the late 1920s. However, Durocher’s obsessive personality irritated his teammates as well as Yankee management, who were concerned about his association with actor George Raft and other alleged members of organized crime. Durocher also antagonized Babe Ruth who adamantly believed that the shortstop took advantage of the Babe’s inebriated condition to steal a watch—a charge that Durocher always denied. Seeking to please Ruth and get Durocher out of the American League, the Yankees traded him to the Cincinnati Reds before the 1930 season.

Cincinnati owner Sidney Weil proved to be somewhat of a father figure to Durocher and helped him organize his troubled finances, but the ballplayer continued to gamble. Durocher played hard for the second-division Reds, and before the 1933 season was traded to the St. Louis Cardinals, playing a strong shortstop for the 1934 world championship Gashouse Gang. Durocher also endeared himself to St. Louis fans for marrying prominent local businesswoman and fashion designer Grace Dozier—his second marriage. Durocher, nevertheless, wore out his welcome and following the 1937 season, Cardinal manager Frankie Frisch demanded that owner Branch Rickey trade Durocher, who was dispatched to the Brooklyn Dodgers for four players.

Durocher found a home in Brooklyn, and he was named player-manager for the 1939 season. In 1941, Durocher guided the Dodgers to their first National League pennant since 1920, although he was plagued by accusations of “womanizing” and associating with crime figures. Dickson points out that Durocher also angered the baseball establishment by informing Lester Rodney of the Daily Worker that he would have no problem employing black players on his team. Durocher also suffered through a player revolt in 1943 and was divorced by Grace, who was popular among the Dodger wives. Durocher’s job was saved by Dodger owner Rickey who had followed Durocher to Brooklyn. It is interesting that the conservative and religious Rickey was so patient with the flamboyant Durocher, but Dickson surmises that Rickey believed he could reform the prodigal son.

Rickey’s faith seemed rewarded when Durocher supported the signing of Jackie Robinson and threatened to get rid of any player who refused to take the field with the black athlete. Rickey’s plan for Durocher to guide Robinson through the integration of Major League Baseball was disrupted in 1947 when Commissioner Chandler suspended Durocher for the season. Although Chandler was imprecise in stating the reasons for the suspension, it seems that he was concerned with Durocher’s continuing association with Raft and gamblers as well as his marriage to actress Loraine Day, who obtained a Mexican divorce so that she might be with Durocher. Dickson argues that Chandler violated Durocher’s due process rights by not providing him with an opportunity to defend himself against the charges of Yankee owner Larry MacPhail, whose credibility in denouncing gambling influence in baseball was dubious at best. Durocher abandoned his friendship with Raft, but soon began hobnobbing with Frank Sinatra.

Rickey supported Durocher and restored him as Brooklyn manager for the 1948 season. The club got off to a slow start, and the baseball world was shocked when Durocher left the Dodgers to manage their cross town rivals, the New York Giants. After assuming leadership of the Giants, Durocher often feuded with Robinson, but Dickson maintains that this was not an example of racism on Durocher’s part, observing that Durocher had supported baseball integration and regularly played black ballplayers with the Giants. Durocher enjoyed positive relationships with Monte Irvin and Willie Mays, who considered “Mr. Leo” as somewhat of a father figure.

In 1951, Durocher led the Giants to one of the epic comebacks in baseball history. Trailing the Dodgers by thirteen and one-half games in mid-August, the Giants rallied to force a playoff series in which they prevailed with Bobby Thomson’s home run in the ninth inning of game three. As Dickson acknowledges, this amazing streak was aided by Durocher and the Giants employing electronic surveillance to steal signs from the opposition—although this tampering with baseball’s rules was not enough to overcome the Yankees in the 1951 World Series. Three years later, however, the Giants subdued the Cleveland Indians to give Durocher his only World Series championship as a manager.

The next season, Durocher was released by the Giants after insulting team owner Horace Stoneham. He found employment as a consultant with NBC television; however, he missed the baseball diamond. In 1959, Durocher accepted a coaching position with the Los Angeles Dodgers, but his presence was often disruptive for the club and tended to undermine the authority of manager Walter Alston. Durocher finally got another chance to manage in 1966 with the lowly Chicago Cubs. Three years later, Durocher had the Cubs challenging for a divisional title. Dickson places considerable blame on Durocher for the collapse of the 1969 Cubs, observing that he failed to rest his veteran players and was overly critical of Ernie Banks, who was the heart and soul of the Chicago club. Durocher was unable to take the Cubs to the promised land and was let go during the 1972 season. He briefly accepted a managing job with the Houston Astros, but the game had really passed him by. He was quite critical of the players’ union, but as Dickson notes, he had no problem accepting a rather lucrative pension package negotiated by the union.

Dickson is rather sympathetic to Durocher in his final years, which were often spent in isolation. He divorced Day and suffered through yet another unsuccessful marriage in addition to a number of failed relationships with younger women. Having antagonized many reporters and former players, Durocher was ostracized by many within the baseball community, and he was quite bitter about his failure to achieve election to the Baseball Hall of Fame.

Durocher died on October 7, 1991, and three years later he finally achieved his dream of inclusion among baseball’s immortals. His third wife, Loraine Day agreed to speak on Durocher’s behalf at the ceremony, insisting that her former husband be recognized for the nice guy he really was. Dickson concludes, “It was a Hollywood ending that Leo would have appreciated, along with the fact that his plaque would hang on walls shared by some of the men who disliked him most.”

Dickson’s biography of Leo Durocher captures the bright sunshine and optimism of baseball’s spring training by focusing upon a man who loved the game, but the dark side of the sport is revealed through a man with an inferiority complex and a gambling problem who antagonized many in the nation of baseball by his desire to win at any cost; threatening the integrity of the game and leaving Durocher isolated and lonely. Along with the Black Sox and Pete Rose, Durocher’s fall from grace was largely a result of baseball’s original sin of gambling casting a giant shadow over the game.