Did Jefferson Really Hide Sally Hemings in a Long-Lost Secret Room at Monticello?

Some historians at Monticello, Thomas Jefferson's elegant home in Virginia, have recently suggested that Jefferson had some sort of secret room installed so his alleged slave mistress, Sally Hemings, could enter his private chambers at any time of day or night, without being seen or heard.

For the last fifteen years, Jefferson’s reputation has been unfairly eviscerated by authors and Monticello, with a misrepresentation of the 1998 DNA study turning reputed science into political science. The exhumation of prurient embellishments has not only misled the public but impoverished a fair debate. The “Sally” story is pure fiction, possibly revisionist politics, but certainly not historical fact or science. It reflects a recycled inaccuracy that has metastasized over two hundred years. Thomas Jefferson was raised as the perfect Virginia gentleman. The personality of the man who figures in the Hemings soap opera would be preposterously out of character for him.

A public perception that Sally either lived in the space over Jefferson's bed or used it for access to an upstairs room derives from pure fiction. The space, not a bed but an out of season storage closet, varies in width from 2'6" to 2'9". According to architectural historians, who removed a modern staircase in 1979, the space was reached either by a ladder or a steep ladder-like stair. Nothing has been found in the documentary record to indicate that Sally ever lived inside the Monticello house.

At the time Sally lived at Monticello, there were only two ways to gain access to Jefferson’s bedroom. One, through the side door off the main entrance, which would be clearly visible to everyone in the house. Or two, a circuitous route up from the slave quarters, over the south pavilion, through the greenhouse window, through another window to Jefferson’s summer study, through the French doors and into his bedroom. All of which could have been heard throughout the house.

Officials at Monticello have written that that the “porticles” (explained below) and staircase were added at the same time.” This is not accurate. They were built at two different times—porticles in 1805 and the staircase in 1796. The staircase Monticello historians refer to leads into a hallway, not directly into Jefferson’s library. Another stairway in his bedroom leads to a narrow storage closet over his bed, used for out of season clothes and legal papers. This was reached by a ladder in an alcove near the head of Jefferson’s bed, and there was no other entrance to this closet.

Some at official Monticello have speculated that Jefferson had the green, louvered shutters put over his windows to hide his sexual liaisons with Sally. Once again, this is patently false. Early in the 1800’s Jefferson modified the greenhouse outside of his bedroom chamber with louvered green verandas, which he called “porticles.” Even though they permitted air and light, he erected them to shield his privacy from a variety of inquisitive strangers, who would wander up to Monticello to glimpse the famous man. 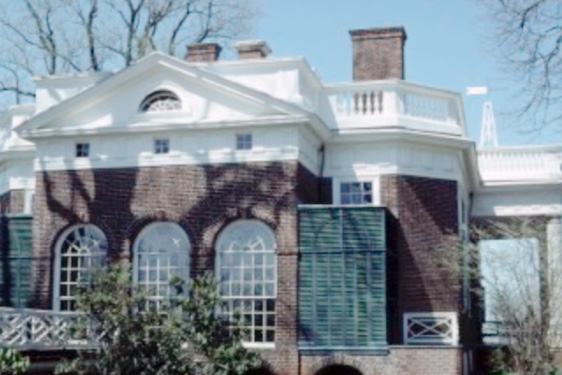 Porticles (green shudders), on either side of the greenhouse

Historians at Monticello have intimated that a “secret” passageway was built in 1802-1803. This was actually a planned stairway, and was not available for the earlier Hemings births in 1795, 1798, and 1801. In actuality, there are no “circular” stairways or hidden entrances to Jefferson’s suite. He opposed such large staircases because he thought they wasted space. He designed his stairways, architecturally, after those he had seen in Paris. The very narrow and steep stairways to the underground passageway were not hidden entrances, but one of convenience and practicality for use by the servants and guests. These slightly winding staircases also lead to the upstairs bedrooms. More importantly, as it relates to the privacy issue, the door from the hallway to Jefferson’s Cabinet is see-through glass from midway up, allowing light from the greenhouse into the hallway. Thus, even if a servant was to ascend that way, there was no allowance for privacy. More to the point, the doors at the bottom of the stairs that lead to the underground passage were locked at night preventing intrusions to the family quarters.

Long before Sally Hemings was born, Jefferson’s first version of Monticello was designed for privacy. When married, Jefferson’s bedroom/dressing room wing was isolated, and his second floor library/study over the parlor could be closed off to intruders. In addition, the design of the “dependencies” (stables, kitchens, slave quarters, etc. below the house) functioned as two sides of an open-ended rectangle, turned to the outside, decidedly away from the house. Jefferson’s design effectively screened the service areas from contact with the great house and west lawn.

Sometime between 1803 and 1808, Sally evidently moved into one of the "servant's rooms" in the South Dependencies between the South Pavilion and the dairy. In 1851, while walking around Monticello, Jefferson's grandson, Jeff Randolph, pointed out to biographer Henry S. Randall "a smoke blackened and sooty room in one of the collonades, and informed me it was Sally Henings' [sic] room."