Joanne Bernardi is professor of modern languages and cultures at the University of Rochester. She organized the exhibit discussed below. 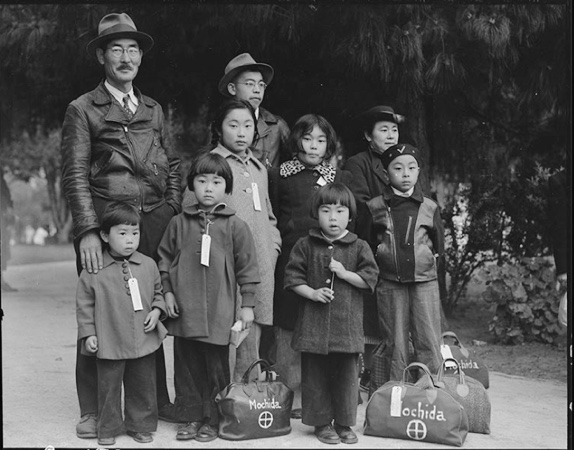 The decision was a mistake. No internees were ever convicted of espionage or sabotage. It was a shameful descent into tribalism. Yet some would have us go down that path again.

Recently the Hartnett Gallery at the University of Rochester mounted an exhibit on the Japanese-American internment camps and how Americans viewed the Japanese during World War II. Among the lessons: dehumanizing a whole category of people makes the most horrific violence against them acceptable.

Wartime propaganda postcards ridiculed all of the Axis powers, but the anti-Japanese cards still shock us today because of how viciously—and literally—they target an enemy of a different race. The violence they depict reflects raw hatred, retribution, and revenge. The nation was in shock, its borders breached. These cards offered reassurance that the world could be put right again.

We included in our exhibit a handheld dexterity game, a small box with a glass lid framing a map of Japan. As you tilt the box, two weighted plastic capsules roll across the map. The goal is to navigate the capsules into two holes on the map labeled “Hiroshima” and “Nagasaki.” This toy bears witness to the power of wartime hysteria to block our capacity for rational thought.

The heart of the exhibit is photography documenting what remains of 10 government incarceration camps. In the months after Pearl Harbor, 120,000 ethnic Japanese living on the West coast were forced to move to them. Most were U.S. citizens, but they looked like the enemy.

Milton Eisenhower, director of the War Relocation Authority, explained the mass internment in a 1942 film by the Office of War Information:

“We knew that some among them were potentially dangerous. Most were loyal, but no one knew what would happen among this concentrated population if Japanese forces should try to invade our shores. Military authorities therefore determined that all of them, citizens and aliens alike, would have to move.”

He glosses over Roosevelt’s executive order authorizing the U.S. government to exclude civilians from any area without trial or hearing. Although the order did not specify any single ethnicity, Japanese Americans on the West coast were the only group imprisoned en masse. Eisenhower describes the camps as “full of opportunity” but in fact they were desolate outposts. Internees were allowed to take only what they could carry. Most people lost everything. For three years they lived in barracks within barbed wire enclosures, surrounded by armed guards.

In 1983, the Commission on Wartime Relocation and Internment of Civilians described the conditions that led to the violation of so many people’s rights as “race prejudice, war hysteria, and a failure of political leadership.” The U.S. government formally apologized and provided reparations to former internees as part of the Civil Liberties Act of 1988.

But now some in our nation would have us repeat the mistakes of the past. In November 2015, David Bowers, mayor of Roanoke, Virginia, said: “I’m reminded that President Franklin D. Roosevelt felt compelled to sequester Japanese foreign nationals after the bombing of Pearl Harbor, and it appears the threat of harm to America from ISIS now is just as real and serious as that from our enemies then.” One month later, presumptive Republican presidential candidate Donald Trump hijacked history by choosing Pearl Harbor Day to call for a “total and complete shutdown of Muslims entering the United States.” Last month he acted to follow up on his Pearl Harbor Day promise.

Other news in 2016 overshadowed two profoundly meaningful events: President Obama and Japanese Prime Minister Abe visited Hiroshima and Pearl Harbor together. They came to these sacred sites to reaffirm a commitment to peace. President Obama spoke of choosing “a future in which Hiroshima and Nagasaki are known not as the dawn of atomic warfare but as the start of our own moral awakening.” History shows that retribution is never a solution—people seize on retaliation when they are fueled by nationalist and even racist sentiment. More than ever, we need to think beyond borders and identities, to reframe the issues at hand in terms of what it means to be human.