Aileen Teague is a Ph.D. Candidate in History at Vanderbilt University and formerly a U.S. Marine Corps Officer. 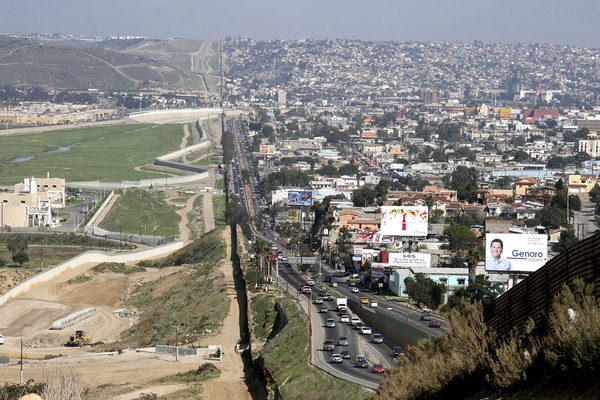 In November 2016, 62 million Americans voted for a man who said Mexico won as a result of the North American Free Trade Agreement (NAFTA), a trade accord between Mexico, the U.S., and Canada enacted in 1994. Mexico, so the story goes, has been exploiting the U.S. ever since. With Mexico making regular appearances in President Donald Trump’s foreign policy shakedowns—from the coming border wall paid for by Mexicans to the president’s purported talk of sending the U.S. military into Mexico to deal with drug cartels and illegal immigrants—the history of Mexican misfortune as a result of its U.S. boundary and NAFTA has been lost in the propaganda of the presidential election and its aftermath.

The Border Across Time

The real and imagined divides of the U.S. and Mexican border, some physical, some more symbolic, are striking considering the inherent arbitrariness of the U.S.-Mexico boundary. In the decades following the treaty of Guadalupe Hidalgo of 1848, which established the border in the wake of the Mexican-American War, both Americans and Mexicans struggled to make the boundary line a meaningful marker of territorial sovereignty. In some places, the border, a 2,000-mile-long space made up of diverse terrain was nothing more than a “line in the sand.” Mexican authorities had to combat filibusters (unauthorized military expeditions into foreign countries) led by impinging U.S. adventurers to protect their lands. Meanwhile, U.S. officials confronted the threat of Native Americans, who had long lived along parts of what was becoming an official divide between two great nations.

The 1880s and 1890s saw the border as a site of commerce and community even as the spirit of economic exchange developed alongside vice districts like Tijuana and Ciudad Juárez where Americans could travel to buy alcohol during prohibition and eventually narcotics.

In the wake of the Mexican Revolution (1910-1920) and World War I (1914-1918) there emerged a trans-border policing movement that motivated the construction of fences and the promulgation of other exclusionary mechanisms to erect a sharper dividing line between the U.S. and Mexico. This was part of increasingly nativist immigration measures embraced by the U.S. in the early twentieth century, measures where the brown immigrant inevitable lost.

Fences, however, could never break the relationships forged between social, economic, and political actors on both sides of the border or the utility of Mexican labor for U.S. commerce. Following World War II (1939-1945), U.S. and Mexican leaders agreed to the Bracero program, a guest worker initiative that continued into the 1960s, in which thousands of Mexicans came to the U.S. for seasonal work. Although Mexican migrant workers were guaranteed food, shelter, and a decent wage, U.S. employers often exploited them and eventually illegal migrants proved a more attractive labor force to minimize U.S. labor costs than did Braceros. Maquiladoras or sweat shops also proliferated in Mexican border cities from the 1960s onward resulting in cheap labor provided to American industries on the Mexico side of the border.

For nearly 170 years, but probably much longer, Mexico and the U.S. have been two nations nearly indivisible. The notion of any sort of wall, physical or figurative, will do little to create the barrier we think it will, nor would it address centuries of exploitation endured by Mexicans at the hands of U.S citizens.

The Problems with NAFTA

With the development of the U.S. “war on drugs” and Mexico as an epicenter of the drug trade, the U.S.-Mexico boundary has proved a critical, albeit ineffective, tool for keeping out the very drug trade caused by U.S. drug demand. The presidential administrations of Richard Nixon and Ronald Reagan both resorted to harsh border restrictions in their bids to reduce drugs and crime at home. These didn’t work.

But policies like NAFTA, which created a trade bloc between the U.S., Mexico, and Canada, effectively eliminated most tariffs on trade between the three countries. Informally referred to as the North American Free Drug Trade Agreement by drug enforcement agents, NAFTA also helped make Mexico the epicenter of the drug trade in the late 1990s. If NAFTA benefitted any Mexicans besides those of the corporate class surely it benefitted Mexican drug trafficking organizations that capitalized on open borders to move their product northward.

The American people have failed in recent months to appreciate just how much Mexico and the average Mexican citizen have lost as a result of NAFTA. The trade agreement combined with existing poverty, economic mismanagement, a history of exploitative U.S. production capacities within Mexico, and global economic factors like the 2008 recession resulted in increased unemployment and a host of negative impacts to the Mexican agricultural industry and economy at large.

For Mexican farmers unable to compete with heavily subsidized U.S. agriculture, NAFTA is hardly as one-sided as Trump claims, especially when considering a staple of the Mexican diet: corn. CNN has reported that U.S. corn exports to Mexico increased from $390 million in 1995, one year after NAFTA became enforced, to $2.4 billion in 2015.

The U.S. is currently the largest producer and exporter of corn to Mexico, but this could soon change as a result of the Trump administration’s stance toward Mexico. Armando Rios Piter, a Mexican senator, plans to introduce a law that would require Mexico’s corn imports to come from Brazil or Argentina rather than the U.S. Piter’s move is political, one intended to show Trump there are consequences for his actions toward Mexico.

Mexico’s current lot is compounded by illegal immigration affecting both its northern and southern borders, drug-related violence, and the notion now that many U.S. jobs in Mexico—put there by U.S. businesses seeking cheap labor, in some cases, decades ago—will be brought back to the U.S. with little consideration of the responsibility to U.S. bears for Mexico impending economic difficulties given U.S. history of economic encroachment along the border.

President Trump articulates future U.S.-Mexico bilateral policies that promise to reverse decades of historical precedent, while he appears to take a more conciliatory approach toward Canada, the other NAFTA partner, making it clear in his discussions with Canadian Prime Minister Justin Trudeau this week that the U.S.’s trade problems were with Mexico not Canada.

Ultimately Trump’s stance is premised on the notion that Mexico wins as a result of current border policies and NAFTA, a notion that history shows is fundamentally flawed. It is a stance clearly informed by the need to restrict Mexico and Mexicans, seen commonly as nearby others, but also utilized and exploited time and again by industrious U.S. economic actors.

Meanwhile, many Mexicans have taken to the streets in protests against Trump, as relations between Mexico and the U.S. reach historic lows.