Denise George is author of 30 books, including Orchestra of Exiles, Behind Nazi Lines, and While the World Watched. Her latest book is The Lost Eleven: The Forgotten Story of Black American Soldiers Brutally Massacred in World War II. 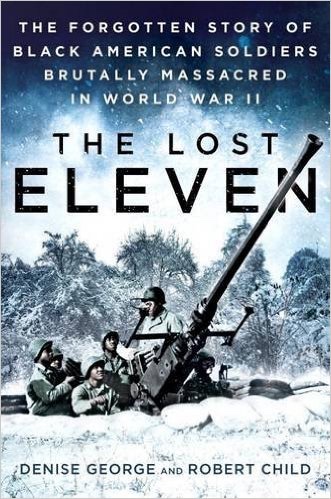 More than seven decades ago, on December 17, 1944, eleven black American GIs, were butchered in an isolated cow pasture in Wereth, Belgium, by a four-man German patrol of the 1st SS Division. Two months later, on February 15, a twelve-year-old Belgian boy, Hermann Langer, discovered the frozen bodies rotting in the melting snow. When U.S. officials examined the remains, they found multiple stab wounds, gouged eyes, shattered skulls, broken bones, and severed fingers, injuries meant to torture the men before the final kill. The dead men’s pockets contained small bibles, letters and photographs from loved ones, a silver cross, and a broken diamond engagement ring.

After a four-day investigation, Col. Burton Ellis closed the files, marking them “secret,” and burying them in the National Archives, where they gathered dust for 70 years. No one was ever brought to justice for the crimes. Their tragedy was omitted from the final congressional war Crimes Report of 1949, which recorded the names of all massacred victims—both civilian and military—and where each crime took place.

Now, for the first time in 70 years, the forgotten and tragic story of these eleven GIs is told in my new book (co-authored by Robert Child), The Lost Eleven: The Forgotten Story of Black American Soldiers Brutally Massacred in World War II (Penguin Random House).

The lost eleven, soldiers of the segregated 333rd Field Artillery Battalion, were among the first African Americans trained for combat in WWII rather than placed in service positions. The men came from Southern states—Mississippi, Alabama, Texas, West Virginia, Arkansas, Georgia, South Carolina—where strict Jim Crow laws were enforced by law and with brutality. The men entered a segregated US Armed Forces, where they slept in separate barracks, ate in separate mess halls, and endured dehumanizing discrimination from white GIs.

After training at Camp Gruber, Oklahoma, on July 19, 1944, they landed at Utah Beach in Normandy. They became highly proficient at loading and firing the massive 155mm Howitzer, once firing four rounds in 90 seconds, and blowing off the turret of a German tank more than nine miles away. So impressed was he by their skill and precision, Sergeant Bill Davidson, a reporter from Yank Magazine, wrote: “It [the 333rd FAB] is rated by the Corps … as one of the best artillery units under the Corps’ control. And I’ve heard doughboys of five divisions watch men of the battalion rumble past in four-ton prime movers and say: ‘Thank God those guys are behind us!’ ”

Providing fire support for Major General Troy Middleton’s US VIII Corps, the battalion saw heavy action in most of the major battles in France during the summer of 1944, including the bitter six-week Battle of Brest, Saint-Malo, La Haye-du-Puits, and Rennes. On October 4, 1944, the battle-weary 333rd were stationed at Schonberg, Belgium, near the tranquil Ardennes Forest beside the German border. At the quiet Siegfried Line—dubbed “The Ghost Front,” they rested, waiting for the war to end, and dreaming of going home for Christmas.

Adolf Hitler, however, had other plans. After silently preparing a massive military buildup and surprise assault, early on the morning of December 16, 1944, German panzer armies attacked the unsuspecting Allied troops at the Siegfried Line, launching deadly Nebelwerfers and heavy artillery. Well-equipped, winter-clad Wehrmacht troops outnumbered Allied defenders ten to one, their German Tigers, Panthers, 88mm, 7.92 MG34, and 75mm guns proving far superior to the American lighter and lesser-armored Shermans. “Screaming Meemies” hit the treetops, exploding with fury, and sending sharp spears of branches onto unsuspecting American troops, knocking them down, ripping their flesh, and killing many. The 333rd provided fire support as long as they had ammunition, holding back German troops until they were helplessly overrun and captured.

An American P-47 strafed the group as the captured men marched toward German POW camps. In the deadly chaos, eleven men escaped, heading north on foot, running through sleet-beaten forests. After many hours and miles, weary, cold, and starving, they happened upon a farmhouse in Wereth, owned by Belgium Catholics, Mathias and Maria Langer. The Langers welcomed the shivering eleven men into their small home, offered them warm blankets and hot food, and introduced them to their eleven children. The Langer’s twelve-year-old, Hermann, became especially enthralled with the kind black soldiers. After an hour of the Langer’s compassionate hospitality, however, the SS appeared at the small farmhouse, having heard of the American GIs from a local German sympathizer. The eleven men immediately surrendered, not wanting to endanger the Langer family. The SS ordered the eleven GIs into a nearby cow pasture. Later that afternoon, they tortured and slaughtered the eleven men, leaving their bodies bleeding in the snow.

But for the compassion of the twelve-year-old Belgian boy—Hermann Langer—the tragic fate of the eleven black American soldiers might have been forever lost to history. Haunted by the memory of the men, in 1994, Hermann tracked down their names, and on the 50th anniversary of their deaths, placed a silver cross on the field where they died. Word-of-mouth news of the massacre spread among Belgians, as well as an American, Norman Lichtenfeld, the son of a Battle of the Bulge veteran. Together, Lichtenfeld and a handful of Belgians, fundraised enough money to purchase the cow pasture in Wereth, and, in 2001, built an official memorial there. Several years later, the memorial was officially dedicated to the Wereth 11, as well as to all the black GIs who served in WWII’s European Theater. Drawing greater crowds with every year, an annual memorial service is held in Wereth to honor these courageous men.

In 2013, with the help of former Congressman Jim Gerlach, the U.S. Senate’s Armed Services Committee revised the 1949 subcommittee report to include a resolution giving appropriate recognition to the eleven black soldiers of the 333rd Field Artillery Battalion.

“This resolution is a tribute nearly seven decades overdue,” the Resolution reads. “And it is indeed a privilege to … ensure that the story of the exemplary service and incredible sacrifice of these 11 black soldiers is always remembered.”