Why Do We Keep Spending Billions on a Missile Defense Weapon that Doesn’t Work? 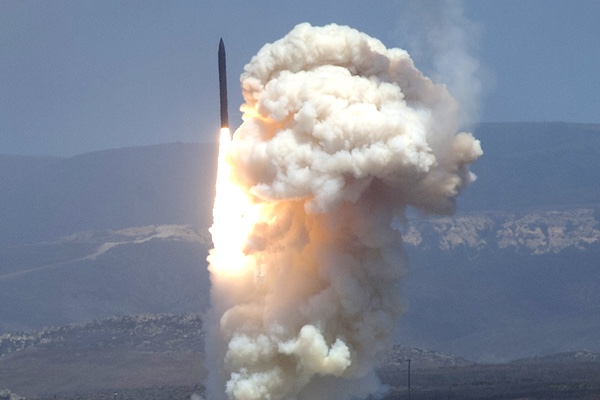 When Americans criticize wasteful government spending, they often fail to realize that the biggest sinkhole for public funds is what’s described as “national defense”―a program that, all too often, does little or nothing to defend them.

Take national missile defense, a program begun with much fanfare during the mid-1980s, when President Ronald Reagan realized that U.S. nuclear weapons could not prevent a nuclear attack upon the United States. According to the President, his Strategic Defense Initiative (lampooned as “Star Wars” by Senator Edward Kennedy) would safeguard Americans by developing a space-based anti-missile system to destroy incoming nuclear missiles. Most scientists doubted its technical feasibility, comparing it to using one speeding bullet to destroy another speeding bullet. Critics also pointed out that development of such a system would simply end up encouraging hostile nations to build more missiles to overwhelm it or, if they wanted to avoid the additional cost, to use decoys to confuse it. In addition, it would create a false sense of security.

Although “Star Wars” was never built, the fantastic dream of a missile shield took hold in Congress, which began to pour billions of dollars into variants of this program. And, today, more than thirty years later, the United States still lacks an effective missile defense system. The U.S. government, however, ignoring this dismal record, continues to lavish vast resources on this unworkable program, which has already cost American taxpayers over $180 billion.

One of the major components of the missile defense program is the Ground-based Midcourse Defense system. Better known as GMD, it is designed to use ground-based “kill-vehicles” to destroy incoming nuclear missiles by colliding with them. In 2004, before any indication that GMD would work, President George W. Bush ordered the deployment of its interceptors. Today, there are four located at California’s Vandenberg Air Force Base and 26 at Ft. Greely, Alaska, and the Obama administration has given orders to increase the total to 44 by the end of 2017. The GMD cost thus far is $40 billion.

All of this might be viewed as water under the bridge―or perhaps water down the drain―were it not for the fact that a third GMD site is now being considered. Military contractors are ferociously lobbying for it, communities in New York, Ohio, and Michigan are actively competing for it and, given long-time Republican enthusiasm for missile defense, this expansion seems very likely to be implemented by the Trump administration. The cost? An additional $4 billion.

Is this a good investment? GMD, it should be noted, was designed to defend against a nuclear attack by Iran or North Korea. But, thanks to the Iran nuclear agreement, its nuclear program is frozen until 2030 or later. North Korea is also not a nuclear threat to the United States, for it does not possess long-range missiles. Of 14 North Korean missiles tested during 2016, some failed to clear the launch pad while others traveled distances ranging from 19 miles to 620 miles. Naturally, as a small-scale system, GMD would be of no value against Russia’s enormous nuclear arsenal.

In fact, at this point GMD is of no value against anything. Thus far, the Pentagon has conducted 17 tests of GMD interceptors since 1999―all in conditions that should produce success. In a situation quite unlike armed combat, the people conducting the tests knew the speed, location, and trajectory of the mock enemy missiles ahead of time, as well as when they would be launched. Nevertheless, the GMD system failed the tests eight times―a 47 percent failure rate.

Nor has the GMD test record been improving in recent years. Quite the contrary. GMD has failed six of its last 10 tests and three of its last four. In mid-2016, a report written by three physicists and released by the Union of Concerned Scientists declared that the GMD system is “simply unable to protect the U.S. public.” Indeed, they concluded, “the system is not even on a path to achieve a useful ability” to do so.

Why, then, despite the enormous cost and the lack of useful results over many years, is this project continuing? One factor is clearly the U.S. fear of hostile governments. Beyond this, however, as David Willman―a journalist who has done extensive investigations of GMD―has reported, lies “the muscle wielded in Washington by major defense contractors, which have billions of dollars of revenue at stake.” Three of them, in fact―Boeing, Raytheon, and Northrop Grumman―donated $40.5 million to congressional campaign funds from 2003 through October 2016.

A key factor keeping billions of U.S. tax dollars flowing to this ill-conceived project is the desperation of declining American communities, anxious to attract the jobs a GMD installation would provide. The three communities vying to house the third GMD site are all in the hard-hit Rust Belt, and their public officials are eager to secure it. “Our community has been dying a little bit at a time,” an Ohio mayor explained. “So we’re hoping that the [local] site is selected.”

But if the only good reason for missile defense is that it provides a jobs program, why not invest those billions of dollars in jobs doing useful things? Why not invest in factories turning out solar and wind power components, high-speed rail cars, and inexpensive medicines? Why not invest in health care clinics, day care centers, libraries, schools, job-training facilities, community centers, concert halls, bridges, roads, inexpensive housing, assisted living facilities, and nursing homes?

This country has made useful investments before. With the political will, it could do so again.