Manisha Sinha is the author of The Slave’s Cause: A History of Abolition (Yale University Press, 2016) and the Draper Chair in American History, University of Connecticut, Storrs. This article was first published on the author's blog. 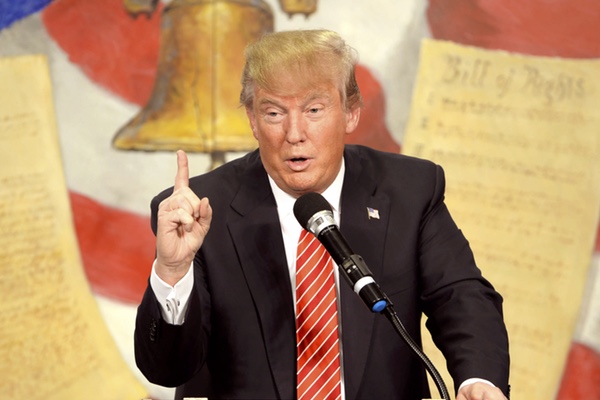 American history is doomed to repeat itself, the first time as tragedy and then as farce. Like the majority of American voters who voted for Hillary, I am shell shocked at the election of Donald Trump, the most outrageous presidential candidate in the history of the United States. As a historian, I see uncanny and unsettling parallels between what happened with the overthrow of Reconstruction, America’s startling experiment in interracial democracy after the Civil War. It seems after every period of extraordinary progress, we witness a complete regression to the forces of reaction.

The historical roots of the “whitelash” that fueled Trump’s victory lie in a prior racial backlash to an unprecedented attempt to grant African Americans citizenship during the period of Radical Reconstruction. The United States was the only major slave society to enfranchise former slaves and for a brief period after the war the first black Senators, Congressmen, and state officials emerged in the southern states. For many white Americans and especially for former slaveholders these revolutionary developments represented a world turned upside down.

Prior to the war, slavery was embedded in the fundamental law of the country and its national political economy. The Constitution contained iron-clad protections for slavery, the three fifths clause and the fugitive slave clause implemented by federal law. As the fugitive slave and abolitionist Jermaine Loguen of Syracuse noted, “The Fugitive Slave Law outlaws me, therefore I outlaw it.” Over ninety per cent of the African American population was enslaved and their unpaid labor underlay not just southern slaveholders’ wealth but also fueled the growth of the country’s economy and the world market. Slave grown cotton supplied the textile mills of New and Old England, the first sector of the Anglo-American economy to develop a factory system at the start of the Industrial Revolution. Cotton was the largest item of export from the United States and its value exceeded the value of all other items of export. The destruction of slavery during the Civil War resulted in the biggest uncompensated confiscation of property in American history, four million slaves valued at over three billion dollars.

During Reconstruction, they became American citizens. The Grand Old Party of the republic, the party of Lincoln and antislavery, presided over an era of progressive legislation and constitutionalism that dismantled the state and society the slaveholders had made. The Thirteenth Amendment to the Constitution (1865) outlawed slavery, the Fourteenth Amendment (1868) established birth right citizenship and the principle of equality before the law regardless of race and previous condition of servitude, and the Fifteenth amendment (1870) gave black men the right to vote. Civil rights laws ensured legal protections to not just former slaves but also free African Americans, who had been treated as second-class citizens during the days of racial slavery. Not until the Civil Rights era in the twentieth century, would the federal government pass such a flurry of legislation to lay the foundations of an interracial democracy.

But that interracial democracy came crashing down as a majority of southern whites and northern conservatives sought by political fraud and outright violence to undo the gains of Reconstruction. The Ku Klux Klan, which endorsed Trump, led by the former Confederate general and slave trader Nathan Bedford Forrest and other white vigilante groups unleashed a campaign of mass terror overthrowing black voting and Reconstruction state governments in the south. Jefferson Beauregard Sessions, Trump’s nominee for Attorney General, has built a career opposing civil rights and his middle name echoes that of the Confederate General P.G.T. Beauregard. White northern apathy and collusion and the failure of either political party to protect black rights resulted in the Compromise of 1877, which gave the Republicans the Presidency and southern white Democrats “home rule.” The latter “redeemed” their states at the cost of African Americans. The dramatic gains of Reconstruction enshrined in the Constitution were undermined, disregarded, and overthrown by a conservative Supreme Court. By the end of the nineteenth century, southern blacks were subject to disfranchisement, Jim Crow, debt peonage, forced convict labor, racial violence, and lynching. Historians call the “Redemption” of white rule in the south “slavery by another name” and “worse than slavery.” It would take another hundred years to dislodge the politics and society made by white supremacy.

Donald Trump’s election, coming at the heels of the historic election of Barack Obama, is the second redemption of the white man’s democracy. The failure of the Democratic Party to refashion itself as a genuine social democratic party no doubt contributed to its political upset in the rust belt states of the mid-west. But in America race always trumps, if you will forgive the pun, class and gender. White workers will reap the empty “wages of whiteness” offered by right wing populism, jumping into the fire from the frying pan. A majority of white women voted for a sexual predator rather than the first female President of the country. The party of Lincoln that appealed to “the better angels of our nature” is now the party of Trump, which appeals to its worst devils.

The results of the 2016 elections bring to mind the words of abolitionist William Lloyd Garrison, who once condemned the slaveholder-dominated American government as “a covenant with death and an agreement with hell.” Frederick Douglass’s excoriation of the Republican Party for abandoning the freedpeople of the south after Reconstruction works just as well today. He said that the party had given itself up “to the side of prejudice, proscription, and persecution.” The growth of American democracy has never been linear and progressive but always contested and fraught with setbacks. As the northerner Albion Tourgee noted in his autobiographical novel on Reconstruction, A Fool’s Errand (1879), “There was a good foundation laid, and sometime it might be finished off.” It is high time then to work for yet another reconstruction of our interracial democracy.