There’s No Reason for Keeping the Electoral College

University Distinguished Professor of Political Science and George and Julia Blucher Jordan Chair in Presidential Studies at Texas A&M University and author of Why the Electoral College Is Bad for America, 2nd ed (Yale University Press, 2011). 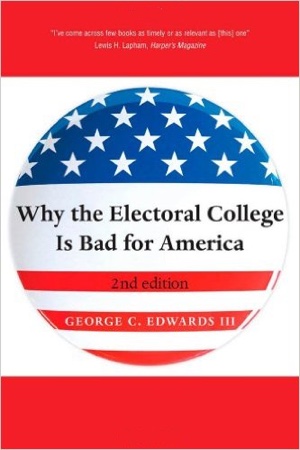 Because the Electoral College is a peculiar method of selecting a public official, one never employed to select any other federal official, it is quite natural to seek to understand why the founders created this mechanism. The explanation is not as straightforward as one might expect, however, at least partly because the Electoral College was the subject of little discussion during the ratification debates following the convention.i Indeed, the lack of attention to the Electoral College led Alexander Hamilton to observe that “the mode of appointment of the chief magistrate of the United States is almost the only part of the system, of any consequence, which has escaped without severe censure.”ii

With the Electoral College overturning the plurality vote of the American people for the second time in the past five presidential elections, it is appropriate for us to inquire about the justifications for this peculiar institution that clearly violates fundamental tenets of political equality and majority rule.

Arriving at the Electoral College was no easy matter. The framers deliberated on the method of selecting the president on twenty-two days and subjected the topic to thirty votes.iii As James Wilson declared near the end of the Constitutional Convention on September 4, “This subject . . . is in truth the most difficult of all on which we have had to decide.”iv Similarly, on December 11, he told the Pennsylvania state ratifying convention that the convention was “perplexed with no part of this plan so much as with the mode of choosing the President of the United States.”v

When the Committee of Eleven reported its Electoral College plan to the convention on September 4, Gouverneur Morris, who served on the committee, cited six grounds for the proposal. They were all essentially negative, centering on the dangers of legislative election. The only real advantage Morris could cite for the Electoral College was that “the great evil of cabal” could be avoided since the electors would vote at the same time throughout the United States and at so great a distance from each other.vi The framers could not agree on — much less articulate — a view of the appropriate role of the people in selecting the president.

In general, the framers wanted to protect against

● executive dependence on the legislature

● voter parochialism and ignorance of distinguished men in other regions

● a powerful executive with electoral legitimacy

To accomplish these goals they designed a system in which voters lacked the right to vote for president, and instead relied on electors who could be—and often were—selected by state legislatures and who had the right to exercise complete discretion in their voting for the chief executive.

Can the intentions of the framers justify the violation of majority rule in the twenty-first century? Most of the motivations behind the creation of the Electoral College are simply irrelevant today and can be easily dismissed. Legislative election is not an option, there is little danger that the president will be too powerful if directly elected, voters have extraordinary access to information on the candidates, there is no justification at all for either electors or state legislatures to exercise discretion in selecting the president, defending the interests of slavery is unthinkable, and the short-term pressures have long dissipated.

The Electoral College, then, was not the result of a coherent design based on clear political principles but, rather, a complex compromise that reflected the interests of different states and the search for consensus. There was certainly no theory articulated to justify political inequality. Although there was concern about protecting interests within states, especially slavery, the framers were not concerned with designing a system that protected states as states. As Madison forthrightly declared, “The President is to act for the people not for States.”vii No one rose to disagree. Moreover, the framers wanted to design a strong national government and quickly and overwhelmingly rejected proposals for state governors to select the president.viii As Martin Diamond put it, “The Electoral College . . . in its genesis and inspiration was not an anti-democratic but an anti-states-rights device, a way of keeping the election from the state politicians and giving it to the people.”ix

Ultimately, the Electoral College was the end result of a process of elimination. According to Jack Rakove, “The Electoral College was cobbled together nearly at the last minute and adopted not because the framers believed it would work, but because it was less objectionable than two more obvious alternatives: election of the president by the people or by Congress. . . . It had no positive advantages of its own.”x

The most basic reason that the founders invented the Electoral College was that the Convention was deadlocked on simpler schemes like direct election and choice by Congress, and thus invented a system that could be “sold” in the immediate context of 1787. The chief virtue of the Electoral College was that it replicated other compromises the Constitutional Convention had already made: large states were allocated the most electors; the South was allowed to count three-fifths of the slaves toward its electors; and small states received a disproportionate number of electors (replicating the Senate). In addition, states’ rights advocates won the right for the state legislatures to choose electors as they saw fit and proponents of legislative supremacy were perhaps assuaged with the electors as intermediary between the people and the president.

So, should we hesitate to abolish the Electoral College in favor of direct election of the president out of deference to the framers? We should not. John Roche put it pointedly: the Electoral College “was merely a jerry-rigged improvisation which has subsequently been endowed with a high theoretical content.”xi Robert Dahl, America’s leading student of democracy, had it right when he concluded that the deliberations on selecting the president in the Constitutional Convention suggest a “group of baffled and confused men who finally settle on a solution more out of desperation than confidence.”xii

Understanding the haphazard foundations of the Electoral College is the critical first step on the road to reforming the system of presidential selection. The culmination of this effort should be allowing the people to directly elect the presidents who serve them.

xii Robert A. Dahl, How Democratic Is the Constitution? (New Haven and London: Yale University Press, 2001), 66.