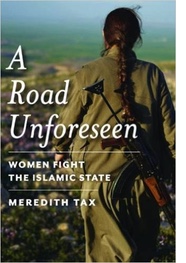 Events in distant lands sometimes capture the excited hopes of progressive hearts — eventually to be exposed as an illusion, or to succumb to the brutal realities of war or the power of global corporate interests.  Examples abound: e.g., the Soviet Union at its inception in the early 1920s, the Anarchist workers movement in Catalonia during the short-lived Spanish Republic, the kibbutz (commune) and workers cooperative movements in early Israel, or worker “self-management” in Tito’s Yugoslavia. Some radical leftists were also variously inspired by Maoist China, Castro’s Cuba, and Nicaragua under the Sandinistas and Venezuela under Chavez.

Meredith Tax describes the latest such radical incarnation in A Road Unforeseen: Women Fight the Islamic State (Bellevue Literary Press), but she does not ignore the odds against it.  Out of the chaos of the Syrian civil war, a radical women’s militia has emerged as a potent force in the battle against the Islamic State.  Possibly overstating her case, Tax contends that female Syrian-Kurdish fighters were exclusively responsible for rescuing the Yazidis, a minority religious community across the border in Iraq, trapped on a mountain by ISIS.  Nevertheless, the Democratic Union Party (PYD) and its affiliated male, female and mixed-gender militias constitute the most effective Syrian force allied with the United States against ISIS.

This is the fifth book by Meredith Tax, the author of two novels and three works of non-fiction.  Her most recent book, Double Bind: The Muslim Right, the Anglo-American Left, and Universal Human Rights, is a left-liberal critique of elements of the extreme left for expressing solidarity with right-wing Islamists out of a shared enmity toward “Western Imperialism.”

In A Road Unforeseen, Tax returns to conflicts in the Middle East to examine the tumultuous history and ongoing fate of the Kurds, approximately 30 million people deprived of a nation-state at the end of World War I and currently divided among four neighboring countries.  She traces the closely intertwined histories of Turkish, Iraqi, and Syrian Kurds — a remarkably violent confluence of people and events.  (Iran’s Kurds are barely mentioned, because they are less interconnected politically.)

At the center is the southeast of Turkey, home to the largest concentration of Kurds, about 20 percent of Turkey’s 80 million people. With the demise of the Ottoman Empire in 1923, its non-Arab provinces became a secular republic dedicated to “Turkification,” a rigidly defined Turkish national identity that outlawed expressions of ethnic Kurdish culture — even suppressing the Kurdish language.

During the 1930s, Turkey attempted to forcibly disperse the Kurds to more easily extinguish their separate identity.  Tax quotes the description of an unnamed British diplomat of Turkish military forces suppressing a Kurdish rebellion in one area of eastern Turkey in 1937: “Thousands of Kurds including women and children were slain; others, mostly children, were thrown into the Euphrates, while thousands of others in less hostile areas, who had first been deprived of their cattle and other belongings, were deported to vilayets [districts] in Central Anatolia.”  Ethnic Turks were reportedly settled in their stead.

In the 1980s, a nascent Kurdish Communist movement, the Kurdistan Workers Party (better known as the PKK), expanded an armed insurgency. Its leader, Abdullah Ocalan, procured military training for his early cadre from Palestinian and Communist guerrillas in Lebanon’s Bekka Valley.  Aside from attacking soldiers and police, the PKK often murdered public officials, civil servants and teachers — triggering its designation as “terrorist” by the US and Western authorities.  We don’t know from Tax’s book, however, if this label is still valid.

Ocalan ruled his party as a Stalinist tyrant, generally viewing criticism, let alone opposition, as treasonous.  Tax states that a dozen “high level cadre were killed between 1983 and 1985, gunned down in Europe or at the PKK’s camp in northern Iraq.”

One of the author’s sources wrote: “Paranoia seems quite rampant among the members of the PKK. They see enemies and traitors everywhere, which is one reason for their violent tendencies.” Another indicated that “over 50 people were executed between 1985 and 1992. “

Recruits, often forcibly conscripted or kidnapped, underwent “an education process designed to break down individual personality structures … cut ties with their families, and agree to sacrifice their personal lives so they could devote themselves totally to the needs of the revolution.”

At its most extreme, sexual relations were forbidden: “Sexual relationships between cadre were considered a grave violation of the party’s commitment to women’s independence and autonomy, an indication of misplaced priorities, and a dangerous distraction to anyone in combat conditions. People who broke the rule were thrown out, and in the early days of the armed struggle, some were executed.”

To be fair, the movement’s rule of celibacy for its fighters and party elite may have more to it than an insistence on fanatical dedication. Guaranteeing the virginity of young women enabled culturally conservative peasants to lend their daughters to the struggle and for women to feel safe in a part of the world where they are widely abused.

The author discusses the practice with some depth in her “Kurdish Women Rising” chapter, but arrives at no resolution.  And it’s not clear if celibacy remains compulsory or even prevalent today.

Operational failures by PKK combat units were routinely regarded as evidence of betrayal rather than reasons to reassess tactical or strategic decisions.  Over 40,000 people, mostly Kurds, are believed to have perished in this conflict, with the displacement of over one million civilians from about 2,000 villages.

There have been two long-term ceasefires, including one that lasted from 2013 until the middle of 2015, when the war erupted anew.  Ocalan was captured in 1999 and has been imprisoned ever since, but his influence has continued in surprising ways.  An inveterate reader, he’s been inspired by the writings of the late American anarchist Murray Bookchin, world systems theorists Immanuel Wallerstein and Fernand Braudel, gender-theorist Judith Butler, and social scientist Benedict Anderson to transform ideologically from Marxist-Leninism to a kind of communitarian anarchism that eschews nationalism.  Writing from prison, Ocalan coined the term “democratic confederalism” for his vision of Kurdish self-government while remaining minorities within their current nation-states.

This change has officially altered the ideology of the PKK and shaped its offshoot in Syria, the PYD (Democratic Union Party).  As the Assad regime focused its attention on defending its heartland, the Kurds overcame weak government forces in the north in 2012.  The PYD has spearheaded a radical reorganization of “Rojava,” as Syrian Kurdistan is known (“west” in the Kurdish language).  Governance in its three geographically-separated enclaves, known as cantons, are described as beginning with neighborhoods of about 300 people organized as “communes” with male and female co-presidents.  The communes oversee committees that deal with various issues.

Tax elaborates: “Eighteen communes made up a district, and the co-presidents of all of them were on the district people’s council, which also had directly-elected members. The councils decided on matters like garbage collection, heating oil distribution, land ownership, and cooperative enterprises. While all the communes and councils were at least 40 percent women, the PYD—in its determination to revolutionize traditional gender relations—also set up parallel autonomous women’s bodies at each level . . . These determined policy on matters of particular concern to women, like forced marriages, honor killings, polygamy, sexual violence, and discrimination. Since domestic violence remained a problem, they also set up a system of shelters. If there was a conflict on an issue concerning women, the women’s councils were able to overrule the mixed councils.”

The modern history of Kurds in Iraq, like those in Turkey, is bloody, beginning with their conflicts with the Arab-dominated central government.  This reached a crescendo with Saddam Hussein’s Operation Anfal in 1988, including the use of poison gas.  Estimates of Kurds killed range from 50,000 to 182,000.  Additional thousands died in 1991 when, in the wake of Iraq’s massive defeat in the first US-led invasion, Kurds rose in rebellion concurrently with Shiites in the south, only to be crushed by the regime’s remaining forces.  It is then that a Western “no-fly zone” effectively shielded Kurds and allowed them to establish autonomy in northern Iraq.

A major source of conflict for Iraq’s Kurds has been internal — the bitter rivalry between two powerful clans, each leading competing political parties and corresponding militias.  Masoud Barzani established the Kurdistan Democratic Party (KDP), regarded as more conservative than Jalal Talabani’s Patriotic Union of Kurdistan (PUK). They fought a brief civil war in 1994.

The KDP has cooperated with Turkey against PKK bases in the mountains of Iraqi Kurdistan, while the PUK has sometimes allied with the PKK.  But Tax regards the KDP and PUK as equally corrupt, and they currently co-exist peacefully within the Kurdistan Regional Government (KRG).

Both the KRG and Turkey view the Syrian Kurds’ PYD as an arm of the PKK. The KRG has imposed an economic blockade on Rojava.  And there’s the anomalous situation of a NATO ally of the US (Turkey) bombing positions of another American ally (the Syrian Kurds).  This has become especially acute of late with the US beginning to arm the PYD militias, even as Turkish tanks move into Syria for the first time.

Although Turkey’s President Recep Tayyip Erdoğan once advocated a loosening of oppressive measures against the Kurds, he has reverted to a brutal hostility, apparently regarding the PKK and Kurds in general as a greater threat to Turkey than ISIS.  The author cites evidence of Turkey having collaborated with ISIS and other jihadis until recently: Turkish hospitals knowingly treating wounded jihadis, and Turkey maintaining a porous border for their access to Syria while largely closing the border to Kurds.

The US alliance with the PYD began with US air support for Kurdish forces liberating Kobane canton, an epic battle that lasted from October 2014 until April 2015.  It marked the first major victory against ISIS.

In October 2015, I attended a public forum sponsored by Dissent magazine at The New School in New York, moderated by Tax, with Kurdish activist and Cambridge University doctoral student Dilar Dirik speaking about Rojava.  My one disagreement with Dirik was in how she addressed an Amnesty International report charging Syrian Kurdish forces with “ethnic cleansing.”  She ridiculed the report, but defended Kurdish actions to remove people from combat zones as necessary to save lives.  This may even be correct, but she denied that forcibly removing people actually is “ethnic cleansing,” which she confused with genocide.  Tax herself, in her book, argues forcefully against some of the charges in the AI report.

Yet the book suffers for a lack of on-the-scene reporting by the author. She relies on secondary sources and does not share with readers how she personally connected with the PKK and YPD story, in terms of Kurdish women or others she may have come to know.

When I queried another publication about reviewing this book, the editor opined that the Kurdish women appear to belong to “a cult,” because they tend to parrot their views with the same words.  Since these women are presumably explaining complicated facts in a language not their own, this may be an unfair criticism.  Or it may be spot on.

To her credit, Meredith Tax acknowledges such a concern in her final chapter, “Some Questions Remain.”  She admits that there still seems to be a “cult of personality” surrounding Abdullah Ocalan, with his image reported to inhabit “seemingly every interior space.” This underlines the question of how the PKK could change “from a totalitarian terrorist organization to a democratic one, [with] … some of the men who led it during its most Stalinist period, ... still in charge.”

Finally, even if true to its declared commitment to egalitarian democracy, the Rojava experiment is going on in the midst of a bitter war, surrounded by hostile forces.  I share the author’s hope that Rojava succeeds.  I want to believe in a fundamentally different model than corporate-dominated economies and nationalistic political cultures, but I’m too conscientious a student of history to be very optimistic.