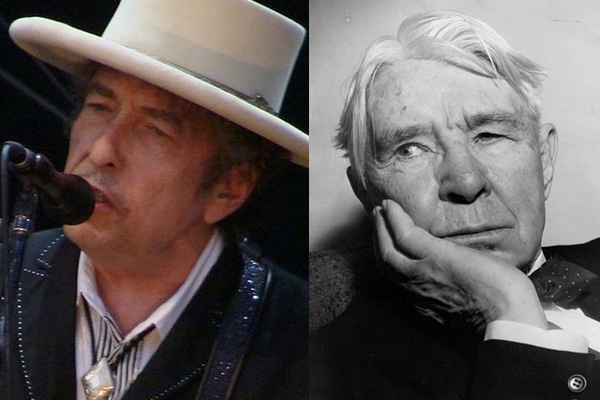 The surprise announcement in early October that Bob Dylan had won the Nobel Prize for Literature set off a cascade of comments. But in my mind it triggered the remembrance of another surprise: the arrival in February 1964 of the 22-year-old Dylan on the North Carolina porch of the 86-year-old poet and Lincoln biographer Carl Sandburg.

By then Sandburg was one of the most famous men in America. He had recorded more than 20 albums of his various works and often appeared on radio and television. He had twice been awarded a Pulitzer Prize, once for history (1940) and then for poetry (1951). In 1959, on the 150th anniversary of Lincoln's birth, Sandburg became the first private citizen in the twentieth century to address a Joint Session of the U. S. Congress. In 1962, because of President Kennedy’s request, Sandburg’s Forward introduced JFK‘s speeches gathered together in the book To Turn the Tide. The next year, Kennedy sent a congratulatory telegram to the poet’s eighty-fifth-birthday celebration. It stated that Sandburg “as a poet, story-teller, minstrel and biographer, has expressed the many-sided American genius.”

Yet, the young Dylan seems to have suffered no trepidation about knocking on this famous man’s door. “You're Carl Sandburg,” he said, “I'm Bob Dylan. I'm a poet, too.” Sandburg invited Dylan and a few friends who accompanied him to sit down. Dylan told the old poet that he had often been mentioned by Woody Guthrie, the famous folk singer Dylan often visited in the hospital. He then handed Sandburg his recently released album The Times They Are A-Changin' and told him he’d appreciate it if he listened to them. One of Dylan’s companions on that occasion later noted, “I distinctly felt like there was a passage of honor between the young prince and the old king.”

Now more than a half century later, Dylan is still about a decade younger than the old Sandburg was in 1964. But when we look back at more than a century of their combined careers and works what we see can see and hear, besides their unique individual voices, are myriad images of the American past and character. And since Sandburg wrote a six-volume biography of Abraham Lincoln that America we view goes back to the Civil War—in his excellent Bob Dylan in America (2010), historian Sean Wilentzalso traces the roots of many of Dylan’s songs back to pre-20th century American history.

Besides the many aspects of the past in their works, we also see in the lives of the two American troubadours two significant strains of American visions: 1) leftist protests against many aspects of America’s capitalist consumer culture and, almost paradoxically, 2) achieving the “American dream.”

In The American Mind: An Interpretation of American Thought and Character since the 1880s (1950), Henry Steele Commager wrote: “Who, in the half century from Cleveland to Franklin Roosevelt, celebrated business enterprise or the acquisitive society . . . ?  Almost all the major writers were critical of those standards, or contemptuous of them. . . . Most authors portrayed an economic system disorderly and ruthless.”

As a socialist in his early years, Sandburg was part of this critical tradition. And as late as the 1950s, he still criticized our consumer culture: “Never was a generation that has been told by a more elaborate system of the printed word, billboards, newspapers, magazines, radio, television—to eat more, play more, have more fun. But General Robert E. Lee told a mother with a child in her arms: ‘Teach him to deny himself.” (See here for sources of quotes, and much more, regarding Sandburg.)

As a young man in the 1960s, Dylan became a leading voice of the countercultural movement protesting against the dominant capitalist consumer culture. As Donald Brown writes in his Bob Dylan: American Troubadour about Dylan in 1968:

Because of songs already four or five years old like “Masters of War” or “The Times, They Are A-Changin’,” Dylan still remained a voice for youth in this period, as “the battle outside” was truly “ragin'.” Songs like “It's Alright, Ma (I'm Only Bleeding)” spoke to a widespread search for alternatives to the middle-class American Dream. . . . Dylan's songs were already in place as anthems for a rite of passage . . . to music that accorded with youthful discontent and the collective search for new values.

And yet, ironic as it may be, both Sandburg and Dylan achieved the essence of the “the middle-class American Dream”: success, wealth, and fame.

At a memorial service following Sandburg’s death in 1967, President Johnson stated that Sandburg “seemed able to give voice to the whole range of America's hopes and America's hates. He seemed able to communicate, above all, the restless energy that has vitalized, stimulated, and—on occasion—degraded the history of our Nation.” More than a decade earlier, in 1953, Sandburg’s friend and Democratic presidential nominee in 1952 and 1956, Adlai Stevenson, said that Sandburg “is the one living man whose work and whose life epitomize the American dream. . . . In him is the restlessness of the seeker, the questioner, the explorer of far horizons, the hunger that is never satisfied.”

Wilentzsees a similar reflection of America in Dylan’s works; stating that he is “someone who has dug inside America as deeply as any artist ever has. . . . [His songs] can be taken to be, literally, about America, but they are all constructed in America, out of all of its bafflements and mysticism, hopes and hurts.”

Stevenson’s perception of Sandburg as a seeker was accurate. The poet sized himself up in the preface to his Complete Poems, where he stated that in his seventies he was “still traveling, still a seeker.” Dylan has also been a life-long seeker, going through many phases and spiritual searches in his quest to make sense of the world in which he lives.

The restless seeking of both artists spawned their numerous travels, fitting for a nation more characterized by movement than in older, more traditional societies. As a youth in 1897, Sandburg lived for months as a hobo, riding boxcars to states from Missouri to Colorado. The trip increased his sympathies with the down-and-outs of society, the diversity of the American people, and their folk stories and songs. In the pre-WWI years he also spent time as a traveling salesman and traveling lecturer. His The American Songbag (1927) and The New American Songbag (1950) contained songs he collected during decades of travels, songs he often sang, along with reciting his poetry, as he toured the country accompanied by his guitar.

Similarly, Dylan has often been on the move and on the road, from his Minnesota birthplace to New York, to his later Malibu home, and through countless cities and towns in his hundreds of touring concerts—Wilentz provides numerous examples, e.g., from his Rolling Thunder Review of 1975-76 and his “Never Ending Tour,” which included “364 dates from 1988 through 1991.”

Both troubadours have also travelled through, used, and reflected upon an amazing variety of American media forms, almost demonstrating by themselves a history of American media and entertainment. Wilentz writes knowingly of all of Dylan’s borrowings and reworkings of nineteenth and twentieth-century American entertainment forms, including minstrel shows, circuses, folk songs, blues, country music, films, and more.

Besides gathering and singing folk music, Sandburg in most of the 1920s was the main film critic for the Chicago Daily News. Between 1920 and 1928, if one includes all of his reviews, he wrote more than 2,000 columns dealing with films. (See here for more on Sandburg, Hollywood. and media.)

Like Sandburg, Dylan was influenced by movies and directly associated with several of them. While Sandburg was a consultant for The Greatest Story Ever Told (1965), Dylan and/or his music appeared in a number of films including Renaldo and Clara, Gods and Generals, Masked & Anonymous, and Martin Scorsese’s long documentary, No Direction Home: Bob Dylan.

From the 1940s into the 1960s, Sandburg was often on the radio (e.g., to support the WWII war-effort) and television. He appeared on such programs as Edward R. Murrow’s Hear It Now and See It Now and the TV shows of Ed Sullivan, Milton Berle, and Today and Tonight.

While Sandburg was still living, Dylan was also scheduled to appear on The Ed Sullivan Show (in 1963), but bowed out when a CBS executive tried to censor a song he was going to sing, “Talkin’ John Birch Paranoid Blues.” Later, of course, Dylan often appeared on radio and TV in various venues, most notably on the Sirius-XM Radio show, Theme Time Radio Hour with Your Host Bob Dylan, which appeared for three seasons (and 100 episodes) beginning in 2006.

During the past fifty years, Dylan has also been able to take advantage of all the new media technologies unavailable during Sandburg’s lifetime. So today Dylan songs are available in all sorts of formats. One of the latest developments is the 2016 announcement by Amazon.com and Lions Gate Entertainment that they are developing a TV series based on Dylan’s songs.

Both Sandburg and Dylan have been well aware of how important media has been in American life. In answer to a question in 1953 about the most notable development during his long life, Sandburg responded: “Well, I’ll say . . . culturally speaking, [it] is the new media that’s come across the last thirty or forty years. The movies, radio, and now television.” Notwithstanding their appreciation of media and the benefits it has brought them, however, both artists have also criticized its failings and excesses.

Despite their many similarities as American icons, the two men have many personal and public differences. Sandburg’s political views have been more consistent and easier to decipher. Although going from the socialism of his young years to supporting Democrats like FDR, Stevenson, and JFK, Sandburg believed it was not so much because he had changed, but more because such Democratic presidential candidates had moved leftward.

But like Dylan later, Sandburg valued his independence and thought of himself primarily as an artist, not as any type of political follower. In 1919, for example, he expressed his desire to maintain his independent thought and resisted joining “a movement or party or church” and subscribing “to a creed and a program.” Similarly, the Beat poet Alan Ginsberg noted that his friend Dylan “didn’t want to be a political puppet or feel obligated to take a stand all the time.”

Nevertheless, throughout their long careers both Sandburg and Dylan expressed leftist sympathies with America’s persecuted and unfortunate, including minorities. Sandburg condemned racism in his book The Chicago Race Riots, July, 1919. A Jewish friend of the poet, writer Harry Golden, stated that “the fight against anti-Semitism and Negrophobia had been a special project” of his. In the 1960s Roy Wilkens, head of the NAACP, made him a lifetime member of that organization and declared him “a major prophet of Civil Rights.” Sandburg’s 1936 epic poem, The People, Yes, is full of compassion for the Depression’s afflicted people.

Dylan’s leftist sympathies were most evident in the 1960s. One New Left Radical of that decade later wrote: “The tiny New Left delighted in one of our own generation and mind [Dylan] singing earnest ballads about racist murderers (“The Lonesome Death of Hattie Carroll”), the compensatory racism of poor whites (“Only a Pawn in Their Game”), [and] Cold War ideology (“Masters of War” and “With God on Our Side”).

Despite Dylan’s many mysterious movements and transformations since the 1960s, biographies like those of Wilentz and Brown make it clear that the sympathies of Dylan’s youth have not disappeared. Both he and Sandburg are American icons, and they do reflect much about our country and its past. But their poems and songs celebrate the people not the plutocrats and the suffering not the self-satisfied.