Harriet F. Senie, author of Memorials to Shattered Myths, is Director of the M.A. Program in Art History and Art Museum Studies at City College, City University of New York, and also teaches at the CUNY Graduate Center. She is the author of several books and numerous articles on public art, and is co-founder of the international organization Public Art Dialogue and co-editor of its journal, Public Art Dialogue. For more information please visit http://www.harrietfsenie.com 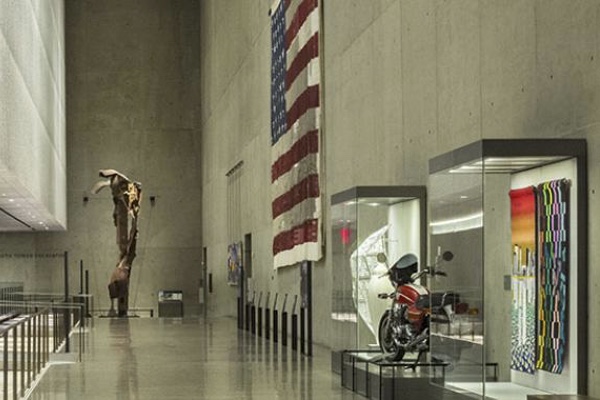 Visiting the current special exhibition at the 9/11 museum on September 14th two days after it opened reminded me of the long gone days when I went to museums to be alone – the few visitors were outnumbered by guards.  However, finding myself unexpectedly overwhelmed and moved to tears by the power of some of the works on display, I was grateful for the sense of solitude. The exhibition, sensitively installed with ample space for contemplation, includes a variety of media: paintings, drawings, sculpture, videos and music. Labels included quotes by the artists and information about their personal experiences of 9/11. More in depth explanations were available in "Stories Behind the Art," flat tables with screens featuring an image for each work and earphones for listening. Visitors in turn are able to record their responses in a separate gallery/recording studio directly across from the exhibition exit in an installation called "Share Your Story; Listen to Each Other." 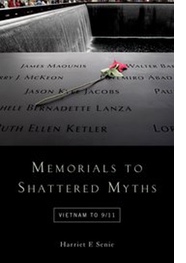 Following the intended counter clockwise path of the exhibition, the first works are four paintings by Ejay Weiss, part of a nine-painting series in acrylic and ash on canvas, entitled 9/11 Elegies that the artist worked on in 2001-2002. At the center of each painting is a bright blue square or rectangle, calling to mind at once the somehow incongruous clear blue sky that marked the day of the World Trade Center attacks. Here the classic window into space that defined painting for many centuries, seems to be seen from below and head on at once. The blue centers are surrounded by a grid-like web of lines of varying thicknesses all frayed at the ends, creating at times the effect of barbed wire.  The paintings are compelling and disturbing in equal measure. Ashes feature prominently in a number of other works as well. Michael Mulhern's Ash Road 14-45th and Ash Road 2-45th (2002-05) are made of oil and aluminum paint with World Trade Center ash on paper adhered to canvas. Ashes from the site had settled on the artist's palette in his nearby studio which was filled with shattered glass, smoke and debris on the day of the attack. The two huge canvases with buckling surfaces convey a delicate fragility and an eerie sense of decay.

The scraps of paper that drifted from the office buildings, often landing as far away as Brooklyn (I found some in my Carroll Gardens backyard) are another popular material used or evoked in several works. Two such scraps are incorporated in Fallen # 6 and Fallen #7 (2002) by Doug and Mike Starn on printed hand coated silver emulsion on paper. These apparently fragile works evoking the precariousness of survival were accompanied by a poem by the artists:  "The papers fell from the sky like leaves in autumn… leaves die and are scattered in the wind, just like paper." Floating scraps of burnt and torn paper are projected onto a black wall to accompany an original piece of music composed and performed by Blue Man Group, the experimental performance art ensemble of Matt Goldman, Phil Stanton and Chris Wink. Their music is heard throughout the exhibition.

Certain themes recur in the works, in particular the experience of falling that invokes the bodies seen leaping from the towers but rarely shown at the time. One such body is depicted most literally in sculptural form by Eric Fishl's Tumbling Woman, which was displayed briefly at Rockefeller Center shortly after the attacks but prompted such intense controversy that it was quickly removed.  Although the artist explained that he "created Tumbling Woman as a gesture of respect and compassion for those who had fallen and with the heartfelt desire to bring people together after the tragedy," his sculpture did not have the desired effect. It is seen to better advantage here at a temporal distance and in an art context.

For me the most affecting piece is the Columbian artist Monika Bravo's video September 10, 2001, uno nunca muere la vispera, translated roughly to mean "You die on the day you are supposed to die."  Bravo had a studio on the 92nd floor of the North Tower as part of an artist residency sponsored by the Lower Manhattan Cultural Council. She shared it with the sculptor Michael Richards who was killed during the attacks. Bravo edited previously taped footage of thunder clouds, rain and lightning that she had watched with him the night before he was killed. The first few frames are of water dripping down a window pane like tears. There is a brief glimpse of the Statue of Liberty seen from above amidst the urbanscape of lower Manhattan that was soon to be so radically changed. The video is dedicated: "Michael: wherever you are this one's for you."

The art on display constitutes a poetic elegy, prompting both memories and mourning. It gets beneath the surface of this staggering event in American history, unlike the 9/11 museum's display of artifacts that prompts an overwhelming experience of reenactment, a closed loop of horror.  Effective art, by contrast is layered; it opens possibilities of reflection and reverie. That's why we need it in our memorials and why people in the days after 9/11 flocked to art museums. It speaks to continuity and comprehension of even the most unthinkable events.