So We’re Ignoring the Plight of Syrian Refugees? It’s an Old Story. 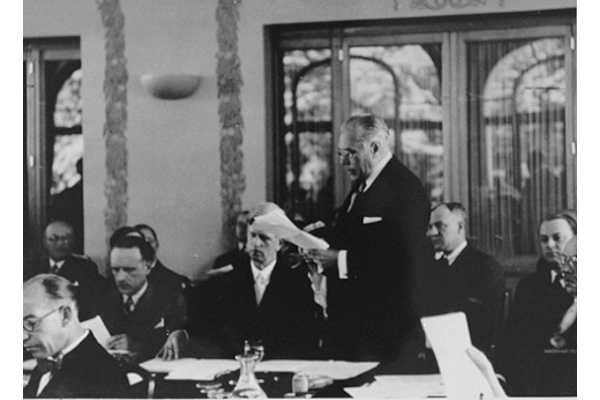 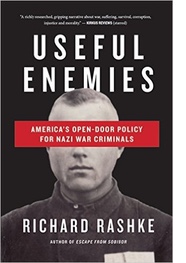 The current refugee crisis mirrors the divisive political debate over welcoming World War II refugees under Presidents Franklin D. Roosevelt and Harry S. Truman. This is the first in a series of articles that puts today’s crisis in the historical perspective of World War II and its aftermath. The series is adapted from the author’s book, Useful Enemies: America’s Open Door Policy for Nazi War Criminals.

The first time the United States showed its hand in the World War II refugee poker game was at the international, invitation-only conference in Evian-les-Bains, France, in the summer of l938. It was six months before Kristallnacht, Hitler’s first major salvo in his war against Jews, and four months after Hitler annexed Austria (Anschluss). More than 150,000 German Jews had anticipated the murder and mayhem of Kristallnacht and fled Germany in the hope of finding a home elsewhere. After the Anschluss, another 200,000 became either homeless or at risk.

Most of the wandering German and Austrian Jews wanted to settle in Palestine, but the British, who controlled that territory, had set a rigid quota. Great Britain was not about to turn Palestine into a dumping ground for European Jews whom other countries, including the United States, didn’t want. To do so would be to risk yet another Palestinian Arab uprising. As Chaim Weizmann, a Zionist who would later become the first president of Israel, put it: “The world seemed to be divided into two parts—those places where Jews could not live and those where they could not enter.”

All eyes were on America. President Roosevelt didn’t relish the spotlight. Most Americans were nervous isolationists who didn’t want to be drawn into someone else’s war, and a large percentage of the working classes and WASP intellectuals were openly anti-Semitic. Roosevelt knew he had to do something. But what?

Ten days after the Anschluss, Roosevelt called for an international conference to address the growing refugee problem, which he saw as much greater than a few hundred thousand homeless Jews. France volunteered to host the meeting at Evian.

The call to action was more political than humanitarian. America was slowly emerging from the Great Depression and, although unemployment was gradually dipping, it still stood at a staggering 19 percent. Roosevelt found himself facing the twin pressures of isolationism and overt anti-Semitism. The later had spiked in the l930s with the advent of a string of anti-Semitic publications and the popular anti-Semitic radio addresses of Charles Coughlin, a Detroit Catholic priest. Father Coughlin had a following of more than forty million, and the Catholic hierarchy made no attempt to silence him.

National polls at the time illustrated Roosevelt’s political dilemma. A 1938 American Institute of Public Opinion poll asked the following question: Should we allow a larger number of Jewish exiles from Germany to come to the United States to live?” Seventy-seven percent said no. Other polls reported that one-third of Americans thought the government should economically restrict Jews, and one out of ten favored racially segregating Jews as well as deporting them.

Many members of Congress and the State Department, including U.S. consulate officials who had great discretionary powers in granting visas, reflected the nation’s anti-Semitism. The Veterans of Foreign Wars opposed the Evian Conference and called for the end of all immigration. And the American Coalition of Patriotic Societies challenged Roosevelt to “stop the leak before it became a flood.”

If he sought to admit more Jews into the country, Roosevelt knew he would be pouring kerosene on the embers of isolationism and anti-Semitism, thus running the risk of losing the upcoming presidential election. A consummate politician, Roosevelt called for a high-profile conference. It was a deft slight of hand that would simultaneously make the United States appear humanitarian, offer a sop to Jewish voters, win applause from the majority of Americans for not caving in to international pressure, and discourage the unemployed from staging angry demonstrations. Roosevelt invited thirty-three other countries to Evian. Only Italy and South Africa declined.

To make the Evian conference palatable to countries that opposed accepting Jews, Roosevelt reduced the meeting to a cruel charade even before the first tap of the gavel. His invitation said in part: “No country would be expected or asked to receive a greater number of immigrants than is permitted by existing legislation.” Having said that, the conference challenged participating countries to accept more German and Austrian Jewish refugees either under their quota systems or current immigration laws, something the United States itself was unwilling to do.

A lone New York Times reporter, Anne O’Hare McCormick, sought to challenge Roosevelt, the conference attendees, and the American public. “It is heartbreaking to think of the queues of desperate human beings around our consulate in Vienna and other cities waiting in suspense for what happens at Evian,” McCormick wrote with amazing insight and clarity. “It is not a question of how many unemployed this country can safely add to its own unemployed millions. It is a test of civilization…Can America live with itself if it lets Germany get away with this policy of extermination?”

McCormick was a voice in the wilderness. The only one who would benefit from the Evian Conference was Hitler.

Evian was little more than a ten-day paid vacation at the Royal Hotel, a luxury resort on Lake Geneva. Casino gambling, pleasure cruises on the lake, outings to Chamonix for summer skiing, five-star dining, mineral baths, massages, golf… In the end, the conference turned out to be historic, but not in the way Roosevelt had anticipated or hoped.

Hitler believed that Western democracies were cowardly and hypocritical. Evian proved him right. The United States did not send a single government official, high or low, to represent it at the conference because it didn’t want to antagonize Hitler. Instead, Roosevelt chose a friend, steel tycoon Myron C. Taylor, and gave him the title of “Ambassador Extraordinary Plenipotentiary.” One of Taylor’s mandates was to ban the use of the words German…Hitler…Jew during the conference, to which Third Reich observers had been invited. Roosevelt didn’t want to upset them.

Prior to the conference, the United States and Great Britain struck an under-the-table deal: Britain agreed not to bring up the fact that the United States was not even filling its legal German-Austrian emigration quota, if America would not propose that Palestine accept more Jews. As a result, the word Palestine was added to the list of verboten words. Also verboten would be any mention of the fact that out of its 1938 combined German-Austrian emigration quota of 27,370, the United States had only granted 18,000 visas so far that year. Of course, any Jew from these two countries could apply for a visa at the appropriate U.S. consulate. But there was a hitch. The United States required a certificate of good conduct from the German police from whom the Jews were fleeing.

Ambassador Taylor tried to put a positive spin on U.S. reluctance to admit more refugees. He promised that more German and Austrian refugees would be accepted under the existing U.S. quota and that American consuls would be instructed to make it easier for them to acquire visas. In effect, the United States offered nothing. Taylor was hoping, of course, that other countries with large territories and small populations, like Australia, Canada, and New Zealand, would open their hearts and borders.

One by one the conference delegates took the microphone and repeated the same message as if rehearsed before the conference: We are saturated with refugees and, therefore, regrettably cannot accept any more; we are willing to accept refugees as long as they are agricultural experts (by law there were no Jewish farmers in Germany and Austria); and we already have too many merchants and intellectuals and, regretfully, cannot accept any more (thus eliminating most Jews). Although the underlying anti-Semitism in the country-by-country refusal was unspoken in most instances, it was blatant in the responses of several countries:

● Australia said it currently had no racial problem and was not eager to import one.

● Brazil said it would accept refugees if Christian baptismal certificates were attached to their visa application.

● Great Britain promised to accept refugee children but not their parents out of fear of an anti-Semitic backlash. It did eventually accept nine thousand Jewish children.

● New Zealand noted its policy of admitting only immigrants of British birth or heritage. Since the conference invitation said participating countries were not expected to change their immigration laws, New Zealand said it wouldn’t.

● Switzerland brazenly stated that it had as little use for Jews as Germany had and promised to adopt measures to protect Switzerland from being swamped by Jewish refugees. Switzerland would soon require all German Jewish passports to be stamped with a large Ɉ.

None of the Evian attendees seemed to understand the scope of the refugee problem confronting them. It was not just about a few thousand homeless German and Austrian Jews. It was about the soon-to-be millions of homeless non-Jewish refugees who were certain to overwhelm Europe. As one analyst at the time put it: “Viewed as a whole … the potential problem is vast and almost unimaginable.”

The conference ended with a resolution to establish a permanent Intergovernmental Committee on Refugees to study the problem and design a framework to deal with it. The only one who thought Evian was a success was Myron Taylor, who reported to the State Department: “I am satisfied that we accomplished the purpose for which … the meeting at Evian was called.”

The Evian Conference was a bonanza for the Third Reich. The pro-Nazi German press interpreted it as a tacit approval of the Reich’s handling of the Jewish problem. And Hitler laughed all the way to Auschwitz. Evian only proved what Hitler had suspected all along: He could do anything he wanted to European Jews and the Western democracies would turn a blind eye. To some Jewish observers, Evian had become “Hitler’s Green Light to Genocide.”

No one explained the Jewish perception of Evian clearer or better than Golda Meir, a conference observer who would later become prime minister of Israel. In her memoir, My Life, she wrote with great angst:

“I don’t think that anyone who didn’t live through it can understand what I felt at Evian—a mixture of sorrow, rage, frustration and horror. I wanted to get up and scream at them all. ‘Don’t you know that these numbers are human beings, people who may spend the rest of their lives in concentration camps or wandering around the world like lepers, if you won’t let them in?’”

In sum, the Evian Conference of July 1938 betrayed the Jews who trusted in world humanity, rendered them worse off than before, and opened the door to genocide. As one Jewish analyst put it: The thirty-two countries met, ostensibly, to help the Jews out of the jaws of the German beast; instead they tossed them to the sharks.

Four months after Evian, the Nazis celebrated Kristallnacht, during which thousands of Jewish businesses and shops were destroyed, hundreds beaten to within an inch of their lives, and hundreds more imprisoned and killed. Hitler was right. The world responded to Kristallnacht as it did at Evian—with shock, condemnation, and no action.