The Year Black People Were Hounded Out of Forsyth County, Georgia

Patrick Phillips is the author of Blood at the Root: A Racial Cleansing in America, from which this piece is adapted.

For hundreds of African Americans in Forsyth County, Georgia, the worst kind of trouble broke out in the Fall of 1912. Though it would take weeks before reports reached Atlanta, in the days after an 18 year-old young girl named Mae Crow was found beaten and bloody in the woods along the Chattahoochee River, a nighttime ritual began to unfold, as each evening at dusk groups of white men gathered at the crossroads of the county. They came with satchels of brass bullets, shotgun shells, and stoppered glass bottles of kerosene, and sticks of “Red Cross” dynamite poked out through the tops of their saddlebags. When darkness fell, the night riders set out with one goal: to stoke the terror created by the recent lynching of a man named Rob Edwards and use it to drive black people out of Forsyth County for good. 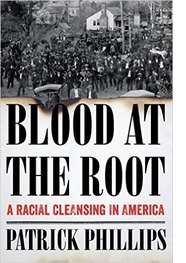 In 1907, W. E. B. Du Bois had put into words what every “colored” person in Georgia knew from experience, which was that “the police system of the South was primarily designed to control slaves. . . . And tacitly assumed that every white man was ipso facto a member of that police.” In the first decade of the twentieth century, the days when all white men had been legally empowered to pursue and arrest fugitive slaves was only fifty years in the past, and the fathers and grandfathers of many locals would have been part of such posses in the days of slavery.

Written traces of the raids are few and far between and consist mostly of vague reports of “lawlessness” after dark. Since journalists only started writing about the expulsions once the wagon trains of refugees grew too large and too numerous to ignore, it is hard to say precisely what took place on those first nights of the terror. Some of the attacks later made headlines in Atlanta (“Negroes Flee from Forsyth,” “Enraged White People Are Driving Blacks from County”), and it’s likely that similar raids had been happening since the discovery of Mae Crow’s body in early September. The night riders fired shots into front doors, threw rocks through windows, and hollered warnings that it was time for black families to “get.” But of all their methods, torches and kerosene worked best, since a fire created a blazing sign for all to see and left the victims no place to ever come back to. In mid-October, the Augusta Chronicle reported that “a score or more of homes have been burned during the past few weeks . . . and five negro churches.”

The arsonists must have been terrifying wherever they struck, but for Forsyth’s poor black farmers, the burning of churches was a true catastrophe, striking not just at the community’s spiritual home but at what Du Bois called “the social centre of Negro life.” In 1903, sitting in his Atlanta University office, just forty miles south, he had described Georgia’s rural black congregations as “the most characteristic expression of African character” in the entire community. “Take a typical church,” Du Bois wrote.

[It is] finished in Georgia pine, with a carpet, a small organ, and benches. This building is the central club-house of a community of Negroes. Various organizations meet here—the church proper, the Sunday-school, two or three insurance societies, women’s societies, secret societies, and mass meetings of various kinds. Entertainments, suppers, and lectures are held. . . . Considerable sums of money are collected and expended here, employment is found for the idle, strangers are introduced, news is disseminated and charity distributed. At the same time this social, intellectual, and economic centre is a religious centre of great power. Depravity, Sin, Redemption, Heaven, Hell, and Damnation are preached twice a Sunday after the crops are laid by.

The erasure of such places from the map of Forsyth was complete. Today, all that’s left are a few scant details about the dates on which churches were founded, lot numbers for the land on which they stood, and the names of a handful of ministers and worshippers who once gathered there. Backband Church, out near Oscarville, was where Buck and Catie Daniel sat on Sunday mornings—surrounded by their sons Cicero and Harley, their daughter Jane, and their youngest boy, Oscar—listening to the sermons of a local farmer and preacher named Byrd Oliver. Stoney Point, down in Big Creek, was where on some Sunday in August of 1912 Harriet and Morgan Strickland took their visiting nephew, Toney Howell, to meet the congregation and be welcomed into his aunt and uncle’s church. Shiloh Baptist, founded by Reverend Levi Greenlee Sr., lay just outside of town on Kelly Mill Road and was home to many of Cumming’s maids, cooks, servants, and butlers.

Faint traces of other black churches are tucked away in handwritten ledgers at the state archives at Morrow; in the collections at the University of Georgia in Athens; even in the basement of the Forsyth courthouse, where a cardboard box atop a metal filing cabinet still holds deeds for the land on which black residents once founded Mt. Fair, Shakerag, and Stoney Point—about which nothing is known but names and approximate locations. All that can be said for certain is that, again and again in the fall of 1912, white men sloshed gasoline and kerosene onto the benches and wooden floors of such rooms, then backed out into the dark, tossing lit matches as they went. All over the county, beneath the ground on which black churches stood, the soil is rich with ashes.