Susan E. Cayleff is a professor in the Department of Women’s Studies at San Diego State University and the author of Nature’s Path: A History of Naturopathic Healing in America (Johns Hopkins University Press, 2016). 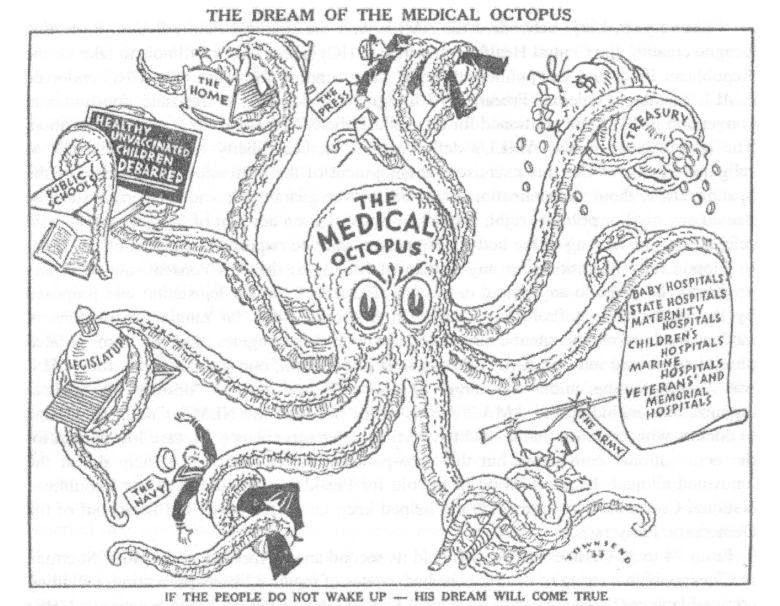 The Citizens Committee Opposing Compulsory Vaccination exhorts Americans to WAKE UP or the octopus’ dream will come true.

Despite the populism of the current presidential campaigns, public discussions about health care costs and insurance are surprisingly minimal. Just as surprising is the relative lack of attention in recent years to insurance for naturopathic and Complementary and Alternative Medicine (CAM). There has been a bit of progress—some policies cover limited chiropractic and acupuncture and even fewer cover naturopathy. But you would think there would be more, given Bernie Sanders’ large following to “fight for a progressive economic agenda that . . . protects the environment and provides health care for all.” Insurance companies know that preventative practices ultimately save them millions, and prevention is the foundation of naturopathy. And today more people than ever, even within biomedical science, are using tried and true natural methods. Nutrition, stress reduction, exercise, acupuncture, herbal supplements and psychological wellbeing are employed to prevent and resolve illness. These methods are not new. Trained, and even lay, natural healers used those therapeutics for centuries. 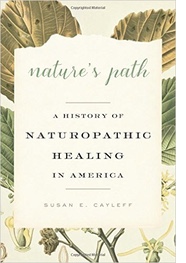 The reason why we would expect a call these days for better CAM insurance is that the growth of, and Americans’ attraction to, natural medicine has always gone hand-in-hand with populist political sentiment like we have seen this year. Natural therapeutics allow people to take control of their own health care without giving up control to an “expert.” We can trace this desire for treatment choice and independence back to the “age of democracy,” 1820s-1850s, when Americans increasingly turned to botanics, or herbalism—long used in domestic medicine—wherein women, often midwives, brought out the medicinal properties of plants through a series of preparations. Willow bark, for example, contained salicin, the original aspirin. Women passed that knowledge down in their families.

In the early 1800s, as American ideas of democratic self-reliance grew, some male medical practitioners also found botanics more effective than traditional medicine. Deploring the depletive treatments of regular physicians, such as bleeding and use of emetics and purgatives, sectarian healers provided botanics and instructed patients in their use, allowing individuals some control over the uncertainties of illness. Increased standards for the botanics developed into a new branch of medical treatment called “eclecticism.” Some physicians combined allopathic practices with herbalism, believing that natural medicines were preferable to synthetic ones.

These practices, adhering to the dictum, “first, do no harm,” rose in the early 1800s along with hydrotherapy--or cold water-cure and hygienic living, partially in response to the burgeoning centralization of the medical profession that became the American Medical Association (AMA) in 1847. Water-cure used baths, showers, plunges, compresses, and water consumption, and results were particularly visible with fevers, inflammation, burns and other common conditions. Hygienic living means you are what you eat and how you live and included all aspects that influenced good health, like food, exercise, sleep, temperance (no alcohol) and proper breathing. Vegetarianism and high fiber diets followed. These sects, together with homeopathy, chiropractic and osteopathy, challenged the authority of AMA physicians who at the time were claiming that only their methods were legitimate and that other theories and practices were quackery. (There were plenty of charlatans selling cure-all elixirs made with alcohol and opiate derivatives.) In short, at a time of self-determination and belief that the will of the people should govern, the alternative practices became popular not only because of their effectiveness but because they did not entail deferring to expert authority.

The premiere twentieth-century champions of natural health, American naturopaths, were originally a group of medical and political firebrands who, beginning in the 1890s, organized against what they saw as the invasiveness of scientific medicine. They were led by Drs. Benedict and Louisa Lust--the latter inspired by radical women’s rights ideology in the 1880s—a couple who created a health “empire,” including the first school of naturopathy in New York City, a health food bakery, health retreat, publications with ideologies and therapeutics, and national campaigns to make naturopathy legal.

It was no coincidence that naturopathy arose during the flurry of Progressive Era reform in the 1890s. Naturopaths were part of a larger resistance movement that opposed, among other things, vaccination, which was still imperfect at best, and vivisection—testing on animals, often without anesthesia. But the AMA had considerable clout by the turn of the 20th century when science was a kind of new religion; naturopaths saw the AMA as the head of a medical monopoly comprised of the pharmaceutical industry, public health, military medicine, insurance companies, and federal government, and together they kept naturopaths from legitimate practice. Benedict Lust, despite his degrees as an M.D., N.D. (naturopathic doctor), D.O., and in homeopathy and eclecticism, was arrested multiple times at the insistence of medical authorities for practicing medicine without a license.

Naturopaths’ anti-authoritarian stance and arguments about disease causality made them medical outsiders. They were not the first to oppose vaccines, but their opposition to police tactics that forced vaccines upon the public led them to see allopathic medicine as despotic. Stories abounded of cities like Cleveland, where in 1901 several people died of lockjaw after vaccination; or of roundups in black and immigrant neighborhoods, such as the one in New York where 250 vaccinators descended on a tenement house in the middle of the night and forcibly vaccinated everyone with whom they came into contact. Naturopaths, rejecting vaccines lacking oversight to ensure they were safe and effective, believed living conditions, more than any other factor, caused epidemic disease. They believed that because of the unhealthy pace and poor hygiene of city life, improvements to the urban environment had to come first.

Naturopaths railed against the anti-immigrant sentiment that justified forced vaccination—fear mongering like we see today. By the late nineteenth century, immigrants, people of color and the poor were crowded into notoriously unsanitary tenements. These living situations were further “proof” to some white middle-and upper-class Americans that poor, ethnic minorities were inherently diseased and lesser beings. Naturopaths radically opposed this, defending the working class, opposing capitalistic greed and any scientific or industrial advances with negative impacts such as processed foods, pharmaceuticals with damaging side effects, environmental toxins, and later, atomic energy.

Naturopathy, while male-dominated, was co-created by women. They were leaders, financial powerhouses, doctors, teachers and authors. Louisa Lust did all of these and advocated, with other female (and male) naturopaths, women’s agency and authority to care for their own and their families’ health, prepare healthy food, live a self-determined existence, and to reject the cultural reliance on professional expertise and the ideology of women as weak. Women’s crucial role in establishing naturopathy as a profession and a way of healthful living is not surprising. During naturopathy’s ascendency in the Progressive Era, women established social research and services, changed laws for workers, women and children – and of course, gained the vote. The anti-monopolistic stance of naturopathy went hand-in-hand with women’s other reform efforts, like pioneer journalist Ida Tarbell, who wrote the 1902 exposé series about Rockefeller’s unethical oil monopoly tactics.

Naturopaths were nearly defeated by their own debilitating infighting and biomedicine’s powerful mid-century breakthroughs, such as antibiotics and the polio vaccine. But like a phoenix from the ashes, naturopathy rose again in the 1960s during the counterculture revolution. The biases and shortcomings of organized medicine were critiqued by the holistic health movement, feminist consciousness-raising groups, and health food establishments. The desire for independent health knowledge, especially by women, was exemplified by the feminist Our Bodies, Ourselves in 1971. The book’s call for personal knowledge and responsibility for health struck a nerve. By 2012, the book had been translated into twenty-nine languages. Meanwhile, in the late fifties, the National College of Naturopathic Medicine had established an excellent foundation of training. Naturopathic schools had already raised their standards, with students studying more basic science hours than leading medical schools, and had solid hands-on clinical experience. These measures not only proved that naturopaths were not quacks as claimed by the AMA, but also distanced themselves from “nature doctors” claiming the title of naturopath without formal training.

By the 1960s and ‘70s, naturopathic publications worked in concert with other media exposing dangerous toxins of big business—chemical products, pesticides, cigarettes—and continuing to advocate vegetarianism and home-grown herbs and produce. The grass roots activism was not unlike what we have recently seen in the Occupy Movement and Bernie Sanders’ socio-economic critiques and followers.

As for insurance coverage and affordability, people have had to pay for naturopathic services out-of-pocket. Today, the Affordable Care Act has promise for wider insurance reimbursement, and therefore more accessibility for trained naturopathic medical care. In an election year when we are seeing waves of young adults rejecting the status-quo, it will be interesting to see what this generation may do to make the outsider “alternative” medicine of naturopathy mainstream.