Do Donald Trump and Barry Goldwater Have Much in Common? 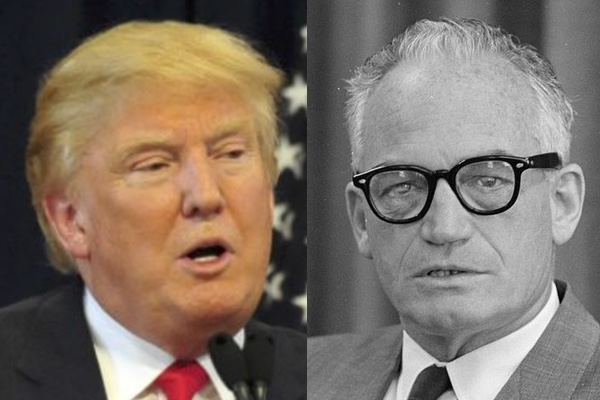 A half century ago, the Republican Party nominated a divisive candidate for President, and he lost the election in a landslide to Lyndon B. Johnson—his name was Barry Goldwater.

Now 52 years later, the Republican Party is about to nominate a divisive candidate for President, and he is on the road to a massive landslide defeat, by any reasonable estimation, to Hillary Clinton—his name is Donald Trump.

Many people look at Barry Goldwater in 1964 and Donald Trump in 2016 and see many similarities, but this author would contend that there is very little in common between Goldwater and Trump. The purpose of this essay is not to glorify Goldwater and vilify Trump, as the author was vehemently against Goldwater as a college student a half century ago, but simply to show how different the two men are in the story of American Presidential elections.

Both Goldwater and Trump are Republican Presidential candidates.

Both Goldwater and Trump are outspoken in their views, and stir massive controversy by their rhetoric.

Both Goldwater and Trump have caused a major split in the party apparatus, and harmed the Republican brand.

Goldwater gained an image of being racist and xenophobic, and was endorsed by white supremacist hate groups. So has Trump.

Goldwater spoke about using nuclear weapons in a way that alarmed many people. So has Trump.

Now to the more significant differences between Goldwater and Trump.

Goldwater was a professional politician, with 12 years in the US Senate when he was the Republican Presidential nominee in 1964, and altogether, served five full terms, 30 years in the Senate. Trump has had no political or government experience at all before announcing for President a year ago.

Goldwater was, despite his right wing views, actually quite pleasant as an individual, and while disagreeing with his political rivals, was always diplomatic and used tact in his personal dealings with others in government. He was not an egotistical narcissist in any fashion, as Trump is. Readers hardly need reminding that Trump does not concern himself with being kind or sympathetic with his rivals, but rather promotes the total destruction of his “enemies” by insults, innuendo, bullying, belittling, mocking, and creating mythology and lies about those opposed to him.

Goldwater was a businessman earlier in his life, owning a department store in Phoenix, but devoted most of his adult life to public service. Trump has been a businessman, mostly a bad one, with constant bankruptcies and failures in so many cases, but knowing how to play the legal system so as to benefit from his shortcomings, at the expense of employees, small businessmen, and many banks, as Trump has been a master of law suits and intimidation of those he deals with in the business world.

Goldwater had basic ethics, morals, and scruples, and would not go out of his way to attack the news media, while Trump threatens to ban media from covering him now, as with the Washington Post, and talks of changing laws to curb freedom of the press, something Goldwater would have found reprehensible.

Goldwater had consistent views on almost all issues, strongly conservative and predictable on most issues, while Trump has no consistency at all in his views, and has flip-flopped constantly over his many years of being a public figure, and was seen more as a liberal and Democrat in his views until he started a war against Barack Obama on the issue of his birth certificate. He has shown no ability to have any strong views that he has not abandoned over time, so one does not know what kind of a President he would be, as he is totally reckless and mercenary in his stated views and attitudes.

Goldwater, despite his vote against the Civil Rights Act of 1964, was actually supportive of civil rights in Arizona over a long period of time; he was a member of the National Association For the Advancement of Colored People (NAACP) chapter in Phoenix. He gained a reputation of being a racist because of his states rights view on civil rights, but actually voted for every other civil rights bill that came to the Senate. Trump, however, has always had a negative view toward minorities, whether African Americans years ago, or Latinos and Muslims today.

Goldwater was fundamentally a libertarian in his views, skeptical of big government and lots of regulations, and in later years, endorsed issues that were not controversies in his earlier career, including support for gay rights, gays in the military, medical marijuana, and abortion rights, claiming it was not the job of government to dictate people’s private lives. Trump is not a libertarian, and has flip-flopped so much it is hard to know where he stands on personal freedoms, but clearly is authoritarian and totalitarian in his basic nature, something that would horrify Goldwater, were he alive today.

Goldwater was a true believer in the Cold War, and wanted to use American power in fighting Communism, and had served in the military, and honored our soldiers, sailors, airmen, and Coast Guard on a constant basis. Trump did not serve in the military, and has been much more isolationist in his foreign policy than Goldwater ever would have been, although Trump loves to talk tough in his speeches, but mostly just a façade without any substance.

Goldwater was a person who gained more respect and regard as the years went by after his massive defeat in 1964, and came to be perceived as a statesman by many, particularly when in his last years, he condemned the Religious Right influence in the Republican Party, and argued for the personal freedom of women, gays and lesbians. Trump on the other hand, has gained little respect and regard, as he is seen as a con man, a liar on a massive scale, a braggart, a bully, a person who engages in character assassination, and a person of no real principles except the self-promotion.

It seems clear that Donald Trump will go down in history with a much lower level of public esteem than Barry Goldwater, who spoke honestly and consistently about his views, no matter how unpopular they were, and always was seen as not purposely manipulating people for his own advancement. And it seems highly unlikely that Barry Goldwater, if alive in 2016, would have endorsed or supported Donald Trump for President of the United States.