How Accurate Is the New Movie About the Free State of Jones? 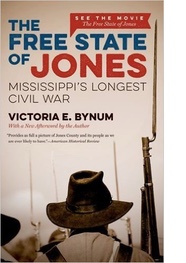 It is not surprising that Hollywood has finally gotten around to releasing a film based upon Victoria E. Bynum’s history of Jones County, Mississippi and its most notorious resident, Newt Knight, a yeoman farmer who led a band of Southern deserters in rebellion against the Confederacy and supported Union reconstruction policies in opposition to the Klan and white redeemer governments; while also defying Mississippi laws and traditions regarding miscegenation. In other words, The Free State of Jones has the cinematic elements of sex and violence situated within the racial and class conflict of the American Civil War. The film stars Matthew McConoughey as Newt Knight and Gugu Mbatha-Raw as Rachel Knight, a former slave belonging to Newt’s grandfather, and directed by Gary Ross, whose previous credits include Pleasantville (1998), Seabiscuit (2003), and The Hunger Games (2012). The script written by Ross takes some liberties with the historical record which is rather silent regarding the relationships forged among Newt, Rachel, and Newt’s white spouse Serena, and their children who married to form an interracial community in defiance of Mississippi’s post-Civil War policies of rigid racial segregation. Nevertheless, Ross’s film is a welcome exception to the summer box office fare of super heroes. And it anticipates the fiftieth anniversary of the Supreme Court’s 1967 Loving decision that struck down Southern miscegenation laws and is the subject of another Hollywood picture scheduled for release in the late fall or early months of 2017.

Bynum, a Distinguished Professor Emeritus of History at Texas State University, presents her history as a more objective examination in contrast with the histories of Knight and Jones County perpetuated by Newt’s ancestors. In 1935, Newt’s estranged son Tom sought to rehabilitate his late father’s reputation by depicting Newt as a Robin Hood figure championing the rights of common people against the exploitation of the slave-owning planters, although the son ignored allegations and evidence of race mixing which embarrassed him. Tom Knight’s perspective was echoed in the novel Tap Roots (1940) by James Street and was made into a movie for Universal in 1948. This more positive rendering of Newt’s reputation was challenged in 1948 by the trial and conviction of Newt and Rachel’s great-grandson Davis Knight for marrying a white woman. Although Mississippi tradition upheld that one drop of black blood defined racial identity, the state Supreme Court overturned the conviction in ruling that the prosecution had not proven the one-eighth racial rule as prescribed by Mississippi statute. Nevertheless, the case encouraged Newt’s great niece Ethel Knight to write the novel The Echo of the Black Horn (1951). Rather than perceiving Newt as a defender of the Union, Ethel discredited her relative as a common murderer and thief who as a deserter betrayed the noble cause of the Confederacy and through the practice of miscegenation dishonored his own family. Ethel Knight’s novel employed Newt and miscegenation to represent the threat posed to white Southern civilization by the burgeoning Civil Rights Movement.

While Bynum is more sympathetic to the interpretation offered by Tom Knight, her book seeks to dispel the simple stereotype of Southern Unionists as poor white trash. Bynum documents the heritage of the farmers who settled Jones County by noting the role played by dissent to established authority through religious and political conflict such as the Regulator Movement in the Carolinas. The original settlers were primarily independent farmers who achieved self-sufficiency without purchasing slaves and growing cotton. Over time, however, a minority class of merchants and slaveholding planters emerged in the region amid growing class conflict with farmers who primarily planted corn and did not rely upon slave labor. This division in Jones County was even apparent within families as Newt’s grandfather Jackie Knight was one of the county’s larger slaveholders. Thus, when the issues of succession arose, Jones County was split, and men such as Newt viewed succession as only benefitting the wealthy. While supporters of Newt such as the Collins family were adamant in their pro-Union sentiments, Bynum is able to find little direct evidence regarding how Newt perceived the Union. He seemed more motivated by class and economic issues as his desertion from the Confederate army after being conscripted was primarily due to the passage of the Twenty-Negro Law that allowed Confederate military personnel owning over twenty slaves the right to go home and supervise the cultivation of their land.

The existence of Knight’s company of deserters in Jones County led the Confederacy to mount military expeditions against the deserters; resulting in battles between Confederate troops and Knight’s forces as well as the brutal execution of alleged traitors, including Newt’s younger brother Ben. Bynum emphasizes that Newt and most of his followers were able to escape capture due to knowledge of the region as well as support by enslaved people and independent women who were often subject to repression by the Confederate soldiers. And this struggle continued into the Reconstruction era as the efforts by former Confederates to regain control of government was resisted by the pro-Union elements represented by Newt’s company. Bynum argues that the forces of white supremacy eventually dominated while the crop lien system or sharecropping enhanced the economic position of merchants and turned many planters into landlords. The assumption that resistance to the new economic and racial order was led by “poor white trash” settling personal vendettas rather than articulating a pro-Union agenda convinced Northern Republicans that they should render little assistance to the struggles of Newt Knight and his company.

Accordingly, Knight withdrew from public life and retreated into the formation of an inter-racial community that defied Mississippi’s emerging Jim Crow society. Newt and Rachel had several children together, while his son Mat and daughter Molly married children from Rachel’s previous relationships that likely included white men who forced themselves upon the enslaved woman. We have no records as to what Serena Knight thought of the relationship between Newt and Rachel, but she remained part of the family by living with Molly and her husband Jeffrey.

In fact, one of the major problems with the story of Newt Knight is the lack of documentary evidence regarding the views of Newt, Serena, and Rachel Knight. Bynum, however, makes excellent use of state and local archives to place Jones County within the broader context of Mississippi and Southern history. To provide perspective on the Knight family during the Civil War and Reconstruction, Bynum draws upon the New Deal WPA interviews of both whites and blacks who were acquainted with the Knight clan. Perceptions of the family as a community of “white Negroes” was mixed; denunciations of Newt for crossing racial boundaries were offset by those who admired his courage and independence. The fluidity of race as a social construct is evident by the fact that ancestors of Newt and Rachel made individual choices to live as either members of the black or white community.

Bynum concludes that the history of Jones County and the stories of Newt, Serena, and Rachel Knight, along with members of the Knight Company, questions the Southern mythology of the Lost Cause. Bynum writes, “The Free State of Jones challenges the very core of this Lost Cause history, bringing to life white landowning, nonslaveholding families who acted aggressively in their own interests—interests that did not coincide with those of slaveholders. Dismissed by their pro-Confederate detractors as treasonous poor whites, outlaws, and cowards, the men and women who supported Jones County’s Civil War insurrection in fact form a ‘heritage’ long obscured by Confederate flags and monuments, as well as by cinematic portrayals of a mythic South” (196). While emphasizing sex and violence, the cinematic version of The Free State of Jones also deserves credit for introducing to mass audiences the complexity of America’s racial heritage, slavery, and the Civil War.