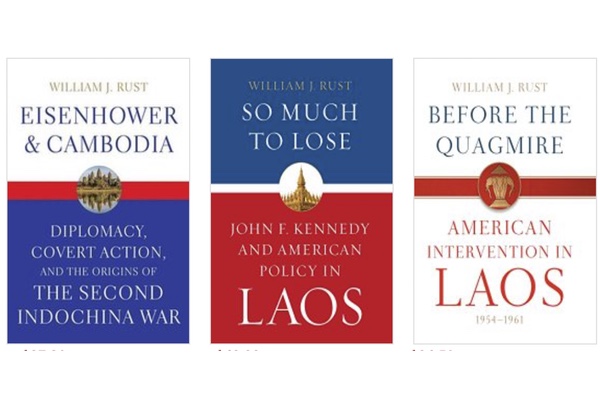 The current quagmire in which the United States finds itself in the Middle East and Afghanistan encourages one to draw unfortunate parallels with the American experience in Indochina; leading to the conclusion that it is far easier to make diplomatic and military commitments than it is to withdraw from an ill-conceived intervention. The current mess in the Middle East also suggests that the United States learned very little from the Vietnam War. The circumstances of the two conflicts are considerably different, but the disturbing tendency to disregard regional history and culture in favor of larger ideological constructs such as the Cold War or the global war on terror are similar. Thus, journalist William Rust in his three-volume history of the origins of the Second Indochinese War provides readers with a case history of which current policymakers should remain aware.

The conflict in Vietnam has received considerable attention from scholars, but Rust makes a significant contribution by focusing his analysis upon the neighboring nations of Cambodia and Laos during the administrations of Presidents Dwight Eisenhower and John Kennedy. Although sometimes the narrative becomes a bit overwhelmed by diplomatic detail, Rust writes in a clear fashion, and his chronology should be accessible to both scholars and interested general readers. While a journalist by profession, Rust follows the historian’s craft by relying upon a careful reading of primary documents and diplomatic communications available in the National Archives, Library of Congress, and Presidential Libraries—although not all relevant documents have been declassified and redactions are plentiful in sources that have been made accessible to scholars.

Rust’s primary argument is that both Presidents Eisenhower and Kennedy based their Southeast Asia policies upon “the cold war stereotype of a monolithic conspiracy, efficiently directed by Moscow and obediently executed by its wholly owned subsidiaries in Beijing and Hanoi. Most senior U.S. officials focused on the global aspirations of Marxist-Leninist ideology, paying scant attention to Southeast Asian history, traditional regional rivalries, and other factors that limited the reach of Soviet hegemony” (So Much to Lose, 52). Policymakers, accordingly, tended to underestimate the Sino-Soviet split, as well as regional conflicts among the Chinese, Vietnamese, Cambodians, and Thais which the ideology of communism could not assuage. In addition, Americans diplomats failed to recognize the power of nationalism for Asian leaders and people overthrowing the yoke of Western colonialism. The fact that Ho Chi Minh might also be a nationalist somehow seemed lost upon many American diplomats. Similar ignorance regarding regional conditions was apparent in failing to ascertain the impact of the U.S. invasion of Iraq upon the Sunni-Shia split within Islam. Rust’s thesis regarding the failure of American foreign policy to adequately account for indigenous factors seems right on target; however, the author could do a better job of briefly describing this indigenous history and culture both before and after the First and Second Indochinese Wars for general readers who lack scholarly expertise in the region.

Rust’s most recent book concentrates upon Eisenhower’s policy toward Cambodia and its mercurial leader Prince Norodom Sihanouk who was able to take advantage of the First Indochinese War to gain independence from France. Following Cambodian independence, Sihanouk drew the ire of the Eisenhower administration by pursuing a policy of neutrality amid the ideological conflict of the Cold War. Following a long history of conflict with its neighbors in Thailand and Vietnam, Cambodian policy under Sihanouk was suspicious of the military dictatorship in Thailand and Diem regime in South Vietnam supported by the United States. These doubts regarding Thailand and South Vietnam encouraged the Cambodian leader to make overtures to the People’s Republic of China whose government was not recognized by the United States.

Responding to rumors that the Prince was secretly a communist, the Eisenhower administration pursued a policy of regime change within Cambodia. The employment of the Central Intelligence Agency (CIA) and covert operations were viewed as successfully neutralizing potential communist threats in Guatemala and Iran—although one may certainly argue that the United States continues to be haunted by its interference into the internal affairs of the Iranian nation—so the Eisenhower administration supported opposition groups such as the Khmer Serei led by Son Ngoc Thanh. The problem for the American policy was that Sihanouk remained popular among the Cambodian people. In 1959, an unsuccessful military coup, supported by the United States, was launched against the Prince by Dap Chhuon, and Rust concludes that the Cambodian leader was convinced that the United States was “implacably hostile to Cambodian neutrality and to him personally” (189). Rust insists that the Kennedy administration attempted to pursue a less confrontational policy with Sihanouk, but the United States subordinated accommodation with the Prince to fighting communism and maintaining good relations with the American allies in Thailand and South Vietnam.

In regard to Laos, Rust maintains, in Before the Quagmire, that Eisenhower wanted to avoid the charade of neutrality posed by Sihanouk and Cambodia. It was the belief of Eisenhower and his key advisers, such as Secretary of State John Foster Dulles and his brother CIA chief Allen Dulles, that the communists could not be trusted and would overthrow neutral governments in which they participated such as the one formed in post-World War II Czechoslovakia. Rust observes that this was certainly true in areas such as Eastern Europe where there were Soviet armies of occupation, but the Soviets lacked this type of influence in Laos. Nevertheless, Eisenhower, Rust argues, believed in the domino theory and adhered to the idea that a communist victory in Laos would endanger Thailand and South Vietnam. Thus, Eisenhower pursued a policy of military aid to Thailand and South Vietnam while negotiating regional security with the anticommunist Southeast Asia Treaty Organization pact.

The efforts of neutralist Souvanna Phouma to negotiate a coalition government with his half-brother Souphanouvong and the communist Pathet Lao were opposed by the United States who eventually supported a military coup by the anticommunist general Phoumi Nosavan. Phoumi had little popular support amid allegations of corruption and was often reluctant to follow directives from the United States, but his consistent opposition to negotiating with the communists convinced the CIA, Defense Department, and military, in opposition to their colleagues in the State Department, to conclude that Phoumi was a bastard, but “our bastard.” Phoumi’s coup drove Souvanna from power and plunged Laos into a civil war in which the Pathet Lao gained territory and effectively partitioned the nation. The fighting also raised fears that Soviet support for the communist forces could possibly lead to a direct confrontation with American forces and covert operations aiding Phoumi. Summarizing Eisenhower’s policies in Laos, Rust concludes, “In a neutrally inclined country, promoting the political career of a military officer primarily because of his strong anticommunist convictions—rather than his competence, honesty, wisdom, or popular support—turned out to be a very bad idea both for Laos and for the United States” (156).

Seeking to disengage from a confrontation with the Soviet Union over Laos, John Kennedy believed the best the United States could achieve was the type of neutralist government opposed by the Eisenhower administration. In So Much to Lose, Rust documents that Kennedy supported a neutralist government led by Souvanna Phouma and sharing power with the right-wing military leader Phoumi Nosavan and the communist Pathet Lao. To assure non-intervention in the internal affairs of Laos, Kennedy dispatched Averell Harriman to negotiate the 1962 Geneva Accords. Rust argues that while the approach pursued by Kennedy might have worked earlier, by 1962 it was simply too late. The Pathet Lao position was strengthened during the Laotian civil war and, assisted by North Vietnam, they were in no mood to negotiate, while Phoumi resisted U.S. pressure to support Phouma. To fuel the insurgency in South Vietnam, the communist government in Hanoi violated the neutrality of Laos along the Ho Chi Minh Trail, while the United States underestimated the ability of the Soviet Union to influence its allies in North Vietnam. To enforce compliance with the Geneva Accords, Kennedy authorized contingency military action, but Rust asserts that the evidence regarding Kennedy and the expansion of the war in Indochina remains inconclusive. Rust concludes: “The lack of compliance with the accords led to ‘secret’ warfare in Laos that was far more destructive than the pre-Geneva fighting. And rather than buying time for successfully defeating the insurgency in South Vietnam, as Kennedy hoped, the failed agreement and the de facto partition of Laos facilitated infiltration from North to South Vietnam” (150).

In the final analysis, President Lyndon Johnson elected a bombing campaign against North Vietnam and the introduction of American troops to reduce or eliminate Hanoi’s interference in Laos and South Vietnam. Under President Richard Nixon, the conflict was extended to Cambodia in a military operation to allegedly deny North Vietnamese troops sanctuaries. The diplomatic efforts of the Eisenhower and Kennedy administrations in Laos and Cambodia only enhanced American support for the regime in South Vietnam and failed to prevent a wider conflict in Indochina. As this detailed diplomatic history by Rust attests, the United States became bogged down in a quagmire in Southeast Asia as indigenous and regional factors were ignored by policymakers who insisted upon placing the conflict within the ideological constraints of the Cold War. Similar failures to understand the complex politics of the Middle East have plagued American interventions in Syria, Iraq, Libya, and Afghanistan. It seems the lessons of history are seldom learned or studied.