A Magazine for the Complicated American 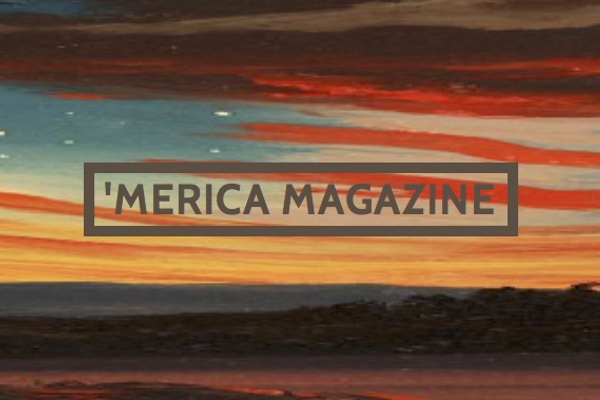 In the summer of 2015, a fellow PhD candidate in English and myself founded something called ‘Merica Magazine. Not everyone will like this magazine. The following people in particular: If you insist that “America is the greatest” country in the world, in all things, even after you are presented with contrary evidence. Anyone who has a “These Colors Don’t Run” bumper sticker. If you are proud of not having a passport. If you’ve ever cluelessly asked why there isn’t a “White History Month.” If your response to “Black Lives Matter” is a tone-deaf “All Lives Matter.” If you support a constitutional amendment to ban flag burning. In fact if you wrap yourself in the flag – either the American or that treasonous one with the X in the middle. If the image you have in your head when you hear the word “American” is always a straight, white man. If you have ever unequivocally supported nuking people “over there.” If in 2002 you actually called French fries “Freedom fries.” If you have ever asked a native born Asian-American “Where are you from?” If you’ve ever told a black American in a surprised tone that “You are so well-spoken.” If you want a border fence built separating the United States from Mexico. If you think America was founded as a Christian nation. If FOX news is your 24/7 background noise. If you think that America needs to be made “great again.” If you’re bellicose. Nationalistic. Xenophobic. Jingoistic.

The following people may possibly like this magazine: If you get pissed off at being an American, but you wouldn’t trade it with anything else. If you stand-up when the national anthem is sung at baseball games but you feel a bit embarrassed about it. If you’d never pretend to be Canadian when traveling abroad but you sometimes still hate to admit that you’re American. If you’ve ever gotten misty during the charge scene in Glory. Or when Sullivan Ballou’s letter is read in Ken Burn’s The Civil War. Or at any point in his baseball documentary. If you understand that the real America might exist in Wasilla Alaska, but that it also equally exists in a Hell’s Kitchen gay bar. If you own a copy of Harry Smith’s Anthology of American Folk Music (extra points if it’s on vinyl). If you’ve ever wanted to visit the crossroads where Robert Johnson sold his soul to the devil. If you get a bit chocked up when you see immigrants take the oath of citizenship. If you actually (at least sort of) believe in Emma Lazarus’s words on that New Colossus in New York Harbor. If you see no contradiction in liking both country music and hip hop. If you know that Moby-Dick is the greatest novel ever written. If you stop to read historical markers. If you ever get emotional when randomly thinking about Abraham Lincoln. Or when going to the Lincoln Memorial, or the Jefferson Memorial, or Gettysburg, or the Vietnam Veterans Memorial. If you can’t quite shake the feeling that American exceptionality might be real – while at the same time admitting it doesn’t always mean “exceptionally good” and sadly often means “exceptionally bad.” If you’re one of the roughs, an American.

So what might a potential ‘Merica Magazine article look like? How about the following ideas (none of these have been commissioned by the way, so if you think you can give ‘em a try, be our guest): What’s the conflicted history of the name “America” itself? Whatever happened to New England’s colonial rum industry (or western Pennsylvania’s whiskey distilleries)? Why did our elementary school teachers make us play Oregon Trail (and who invented it anyhow)? What’s the racially problematic history behind BBQ? What would an accurate map of America look like if we returned to all native place names (and which Indian nation lived where, and why Indians are a real people beyond casino stereotypes and mascot debates)? The Manhattan – Was it actually invented in New York, or Maryland? Are the Catskills to Jewish humor what the Mississippi Delta is to the blues? Who colonized America other than just the British (wait, Philadelphia was in Sweden)? Is it true that Elvis is like a legitimate religious figure to some people? What’s the story behind all that rugged individualist bootstrapping BS anyhow? Can you provide a guide to the best place to see surviving WPA murals? What about the brave southern men and women who resisted Confederate tyranny (such as in the State of Jones) and the capitulation of copperheads who lived in the north? What the hell is the geographic definition of the Midwest anyhow? Is California the most mythologized place in America since stout Cortez (or Balboa, whatever) with eagle eyes first star’d at the Pacific? What is the Great American Novel, and how come nobody ever talks about the Great Canadian one? Is Emma Goldman more “American” than Martha Washington? When did coffee become our national hot beverage of choice? I’ve heard of Joseph Smith, who are some other American-born prophets? There are Basques in Nevada? Was whaling the first international industry we dominated and what was it like? The French have The Song of Roland, and the Spanish have El Cid. Where is our national epic poem? Or do we already have one? What are some great old murder ballads? Does American folklore actually exist? And if it does, how important are aliens and Roswell? Is there an American “style?” Is it paranoid? Anti-intellectual? New York vs. Chicago in all things (Los Angeles might get to play too). Is Rust Belt ruin porn offensive? Vegas baby! Sports – and all that’s racially and economically problematic about its history (but why it also still might be great). East coast, west coast, third coast, flyover country, what gives? Who are the hidden poets, novelists, playwrights – extra points if they don’t look like the picture under “Writer” in the Encyclopedia of Dead Old White Men. Beef Jerky – What brand is for you?! Cowboys and their coffee and weird-ass poetry. And of course – Sasquatch.

It is our contention that a magazine like this has needed to exist for a while. There needs to be a home for the complicated patriot, the unlikely patriot. This doesn’t have to do with just taking the word “patriotism” back from the right (though it does in part). This isn’t some sort of New Democrat branding mission, we’re not here to make a shining pamphlet extolling American diversity like a college brochure Photoshopping minority students into photos of the quad. We’re up to something else. The sociologist Robert Bellah believed that the United States has a civil religion that can be contrasted with that of other nations. Things like the Constitution, the Declaration of Independence, the Gettysburg Address and so on constitute the sacred scripture of America, and the nation itself is a type of religion. If that’s true – and we think it is – then this is a magazine for the agnostics. Because though we might love it, America is a seriously messed up place. At our historical moment you see an obscene and increasingly growing gap between the uber-rich and everyone else, black youth get gunned down by the police seemingly continually, and a significant portion of the electorate sits around clambering to see the president’s birth certificate. At the same time our populace has in other ways grown more diverse and more welcoming. The increasing acceptance of gay marriage illustrates America rising up toward its ideals. What can one say? America seems like a pretty good idea – we should try it some time. What Uncle Walt said was true a century and a half ago and it’s true now – we are complicated, we contradict ourselves, we contain multitudes.