Who Would Jesus Vote for? 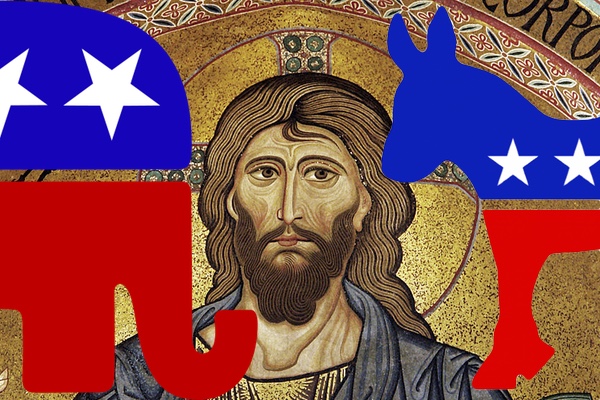 Jesus Christ was not a socialist. Nor was he a free-market capitalist (as one would hope should go without saying). Whether or not one believes him to be the Son of God he was a first-century Palestinian Jew living under Roman imperialism, and influenced by that very specific context of pre-modern politics and apocalyptic religion. Jesus lived before market capitalism, before the scientific and industrial revolutions, before the eighteenth-century language of human rights, and before a coherent modern philosophy of materialism. That he could be thought of as either a socialist – or a capitalist – is a presentist category mistake that imposes and projects our political milieu unto the very distant past. Jesus could have been neither of these things for the simple (and one would think obvious) reason that neither of them existed at the time he lived. At most, it could perhaps be entertained that he was a type of anarchist, though a very odd one who encouraged you to pay your taxes. As a means of political rhetoric (claiming Christ for whatever your narrow partisan side may be) it exhibits a lack of critical thought and historical context.

It’s a given in our national discourse that the right excels at claiming Jesus as a member of their own party. Jesus is enlisted as an anti-choice agitator or as an opponent of gay marriage, despite the fact that he never said anything about abortion or homosexuality. Even more incongruously he is enlisted as a type of Norman Vincent Peale enthusiast for a very capitalist prosperity gospel, certainly an odd interpretation for a man who lived communally and abjured the rich. But a resistance to wealth alone a socialist does not necessarily make, and such an interpretation can lead to a similar category mistake as the ones made on the right. As such, the left can sometimes fall into the same fallacious reasoning that pretends a two-millennia old religious figure’s modern voting preferences can be somehow ascertained. Witness the preponderance of Internet memes that proliferated upon the announcement that the Pontifical Academy of Social Sciences had invited Vermont senator and Democratic primary candidate Bernie Sanders to speak in Rome. Several variations of this meme exist, but broadly they claim something along the lines that “Of course the pope likes the socialist Jew,” explicitly tying Sanders to Jesus in associating the later with the entirely modern economic and political ideology of socialism.

Interpreted in a more charitable way we could claim that such memes are not saying that Jesus was literally a proponent of a modern ideology which he would have never heard of, but rather that this modern political system is more authentically grounded in those ancient teachings. This is not an unfair claim for one to make, and I would of course not discount the power inherent in basing one’s ideology in an interpretation of theology. There are of course venerable strains of Christian socialism that build their foundation on their teachings of the Gospels, but this is different from printing a party membership card with the name “Jesus Christ” on it. And the fact remains that while it’s perhaps impossible to square Matthew 19:24 (“It is easier for a camel to go through the eye of a needle, than for a rich man to enter into the kingdom of God”) with supply-side capitalist economics, the socialist finds little succor with the Pauline epistle Ephesians 6:5 (“Servants, be obedient to them that are your masters”).

This is merely to point out that religion is bigger, more confusing, contradictory, powerful and in some ways stranger than to be simply reduced to mere partisan categories, much less to be reduced into matters of political affiliation. One imagines that the first century apocalyptic minded Palestinian Jew would be rather befuddled about the question of where he would fall on the particulars of the Dodd-Frank Act.

Those of us on the left take it as a matter of political fact that it’s tacky when Republicans reimagine Christ in their own image, it can be similarly obnoxious when we do the same. It generates the divisive fallacy of trying to define who is “authentically” the member of any particular religious group, always a boring and losing proposition, which serves to reduce categories and smooth out nuance. What we’d benefit more from is a certain humble self-awareness concerning these questions of “Who Would Jesus Vote For?” a historical category mistake if ever there was one. A parable of humility: During the Civil War an adviser said to President Lincoln that God was on the Union’s side, the president responded that “I do not boast that God is on my side,” bur rather “I humbly pray that I am on God’s side.”