Robert P. Watson, Ph.D. is Professor of American Studies at Lynn University in Florida and the author or editor of 36 books on politics and history, including, most recently, The Nazi Titanic (Da Capo Press, 2016). 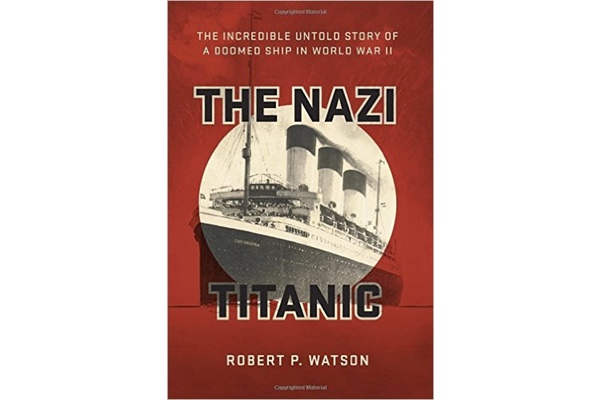 My first thought was, “How could something this shocking and tragic have remained relatively unknown for so long?” As an historian, I know that it is tempting but inaccurate to think we know all there is to know about important events, including such momentous turning points in history as World War II and the Holocaust. Indeed, even seven decades after the end of the world’s worst military conflict and bloodiest episode of genocide new secrets and stories are still being uncovered. This includes the saga of the Cap Arcona.

While the story of the Titanic is familiar to nearly every American from an early age and the world’s most iconic ocean liner has been the focus of countless films, books, and exhibits, the same cannot be said for the Cap Arcona. Yet, this ocean liner, which was built in Germany in 1927 and modeled on the legendary White Star liner, was arguably the most intriguing vessel ever to set sail and had the misfortune of being at the center of some of the most bizarre and tragic events of the war period. When it sank in the final hours of the war, it took over three times as many people to their watery graves as did the Titanic.

Nicknamed the “Queen of the Atlantic,” the ocean liner emerged as one of the world’s most celebrated ships. American movie stars, European monarchs, and the crème de la crème of society cruised on the German liner known for her sleek black hull, towering red and white funnels, state-of-the-art technology, sumptuous cuisine, and opulent décor. But all that changed with the outbreak of World War II. The massive ocean liner was stripped of her luxurious interior, painted a dull, off-white, and moored on the Nazi-occupied Polish coast where she was relegated to serving as a training platform for the German navy.

However, when his invasion of Britain failed, Adolf Hitler ordered a new propaganda front against the British and assigned Joseph Goebbels the task. Avid film buffs, the two Nazi leaders recognized the power of cinema in shaping public opinion and begrudgingly understood the effectiveness of American blockbusters compared to the ham-fisted propaganda films produced by the Nazi Party. They vowed to show the “Jewish controlled” American film industry the superiority of German cinema while simultaneously launching a major propaganda war against the British.

This would be accomplished by establishing “Hollywood on the Rhine” and releasing an epic action-drama film to kick-start the endeavor. Hitler and Goebbels thought they found the perfect vehicle for their mad enterprise: They would retell the story of the Titanic with a Nazi-imbued script and cast the Cap Arcona in the title role. But even in the hands of Germany’s most celebrated director and leading actors, nearly everything that could have gone wrong went wrong. The film fell far behind schedule and the war had taken a turn for the worse for Germany. Under intense pressure, Goebbels summoned the director to Berlin, where he was later found hanging in his jail cell.

When the film was finally completed (with a new director), Goebbels sat down for a long-awaiting private screening of the Nazi Titanic before unveiling his propaganda masterpiece – the most expensive film ever made – to the Führer and the public. But when watching the movie, the propagandist realized the story of a fanatical captain and helpless passengers aboard a doomed ship could be seen as a metaphor for Nazi Germany. He cancelled the movie’s debut in Germany.

The propaganda film would not be the only starring role for the Cap Arcona.

In the winter of 1945 with the Allies closing in on Germany and the Eastern Front in complete collapse, the Nazi command needed to evacuate millions of soldiers and civilians trapped in Poland and other occupied territories. To do so, the Cap Arcona and other large ships were dispatched as part of Operation Hannibal, the world’s largest maritime evacuation. The mission was to transport the refugees across the Baltic and away from the rapidly advancing Red Army. The convoys of ships were hunted and several were sunk by Russian submarines, but the Cap Arcona managed to rescue tens of thousands of refugees during several daring and deadly crossings.

After completing her mission, the Cap Arcona sailed to Lübeck Bay near Neustadt on Germany’s northern coast for one final voyage.

Days earlier, Hitler had decreed that the concentration camps be liquidated. Heinrich Himmler, in a strategically vague message, responded by ordering camp commandants not to allow prisoners to fall into enemy hands. Uncertain as to the exact instructions, the camp commandants responded with varying actions. Some slaughtered their prisoners; others marched them in the only direction free from the approaching Allied forces – north to the Baltic and to Neustadt.

Many tens of thousands of survivors were forced on a death march, while others were put aboard trains or crowded barges for the trip north. These forlorn souls were still arriving by the thousands in May. Amid the chaos that defined the disintegrating Nazi empire in the final days of the war and with Hitler and Goebbels dead, Himmler and other Nazi leaders on the run, and British forces on the outskirts of Neustadt, the fate of the survivors was uncertain.

The Nazi officials still in control along the Baltic interpreted their orders. The prisoners from the camps were herded onto the Cap Arcona, which had been stripped of her furnishings and safety equipment and anchored three kilometers off the coast. Crammed below decks and locked into any available space, they were deprived food, water, and sanitation. Surviving records suggest the ship was to be scuttled with several thousand prisoners aboard in a final, diabolical scheme. The Nazi’s favorite ship would not be allowed to fall into enemy hands and would end her days in a tragedy reminiscent of the Titanic... only far worse.

Yet, on May 3, 1945 at the very moment the grand liner was about to be sunk, British forces arrived. After making quick work of the German home guard, commanders began the task of accepting the surrender of the Nazi naval base and liberating the survivors trapped on the ship. In a cruel twist of fate, bombers from the Royal Air Force, unaware of events on the ground, flew into the bay and attacked the Cap Arcona. The sinking of this cursed ocean liner in the final moments of the war constitutes possibly the world’s worst case of friendly fire, the single bloodiest hour of the Holocaust, and history’s most tragic maritime disaster.