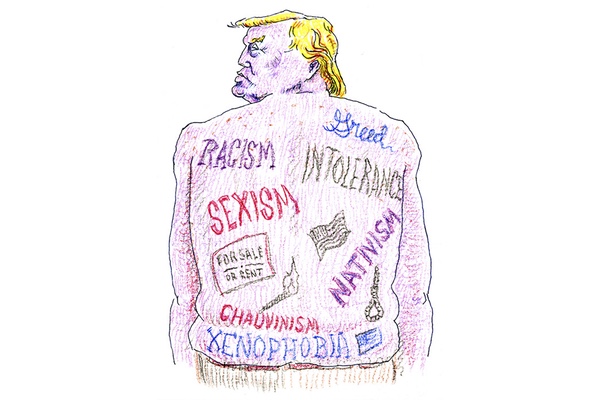 What started as a joke in the summer and fall, and became worrying in the winter, now becomes terrifying in the spring. That Donald Trump, a seemingly stupid, foolish, little man, could be on the verge of presidential nomination to the party of Abraham Lincoln is an obscenity. Pundits long predicted and awaited a rhetorical or electoral loss for the candidate, and the going assumption concerning his ambition chalked it up to a mere marketing stunt.

But now, after his seemingly scandal-resistant language has encompassed endorsements for everything from the forced deportation of eleven million human beings, a ban on members of the second largest religion in the world from entering the United States, the legalization of torture, the indiscriminate murder of the innocent families of suspected terrorists, and a promise to craft libel laws so strict that it would amount to a de facto voiding of the first amendment, we find that the jokes of last summer are not so funny.

Even more worrying than the candidate himself, is the violent specter of Trumpism. Protesters have been forcibly ejected from Trump’s rallies, reporters have been assaulted, supporters have screamed out racial slurs to the approval of the candidate. Use of the term “fascist” to describe Trump in earnest started to proliferate this past fall. It then increased after he refused to condemn the support of David Duke, the Ku Klux Klan, and other white supremacist groups. As if to directly mock the concerns of everyone from establishment Republicans to the progressive left, Trump had his supporters at a rally in Florida last Saturday raised their right hands in an “oath” (to him, not the United States) whose ominous parallels to Hitler’s “Sieg Heil” seemed obvious, and intentional.

I’ll leave it to you to draw your own conclusions on how appropriate the designation “fascist” is for Donald Trump. A good place to start is the classic and brilliant essay “Eternal Fascism: Fourteen Ways of Looking at a Blackshirt” by the recently deceased Italian literary critic Umberto Eco. He identifies “Ur-Fascism” as being defined by things like a “cult of tradition,” a sense of “action for action’s sake,” a “fear of difference,” “contempt for weakness,” and “selective populism.” You can go through and check off the similarities yourself. Trump’s omnipresent (and meaningless) call to “Make America Great Again” certainly evidences the cult of tradition, his contention that the United States has “become very weak and ineffective” shows both the contempt for weakness and a belief in action for actions sake – even to the point of abandoning the American values of due process, free speech, and constitutional rule of law which made America great in the first place. In his defense of economic policies which are traditionally read as more liberal, we see the selective populism of a candidate who doesn’t disparage the goals of the welfare state, but believes its bounty should only be shared by certain segments of the population. Eco even claims that the fascist will transfer his “will to power to sexual matters,” which we all saw during the bizarre spectacle of a major political candidate bragging about his penis size during the middle of a televised debate. In the short space of half-a-year we’ve gone from a man who was widely understood as a type of snake-oil-salesman, a huckster, and a carnival-barker, to fascist-like salutes at rallies.

As we’ve all tried to develop a critical framework to understand Trumpism, there has been a tendency for some on the left to ameliorate our anxiety by pointing out that a President Trump would be legislatively and judiciously contained by federal checks-and-balances; or that in some respects (particularly concerning some economic and reproductive rights issues) his statements have been to the left of candidates like Ted Cruz. This strategy of trying to keep our fears in check may be understandable, even admirable, but it is misguided. That Trump has some opinions less noxious than Cruz doesn’t change the more pertinent fact of Trump’s demagoguery and authoritarianism. That a president is constrained by checks-and-balances only works if everyone agrees to the system. The sociologist Robert Bellah in his land-mark 1975 study The Broken Covenant: American Civil Religion in a Time of Trial argued that what the populace of a multicultural, multi-religious, multi-linguistic nation like the United States used to generate social cohesion was a type of secularized civil religion which conferred an almost covenantal identity on the American people. The British philosopher John Gray has written that “Modern politics is a chapter in the history of religion,” and indeed as the first nation-state inaugurated after the eighteenth-century Enlightenment the United States has always been an example of a polity whose dominant ideology is in some sense a type of secular religion. Bellah sees the rituals and texts of this American faith in everything from our national symbols and monuments, to the profound almost scriptural authority of our founding documents like The Declaration of Independence and the Constitution. As Gray has written elsewhere, “all political ideologies… are religious.” In this way it’s very true that the United States was founded as a “religious” nation, but the religion it was founded upon was not Christianity, but rather the idea of the nation itself.

Within that religion, as with all religions, you have liberals, reformers, moderates, traditionalists and fundamentalists. You have the orthodox, and you have heretics. But the perennial thread which connects individuals as disparate as John Winthrop, Martin Luther King, and Ronald Reagan, was a sense of the nation itself as somehow covenentally sacred. Historian Sacvan Bercovitch has argued that this almost providential sense of self, despite its incredible variation and diversity, lay at the heart of the American ideal and distinguished the nation from other countries. As a concept it was useful in keeping demagoguery in-check, for as pernicious as the American cult of individuality may be, it seemed to historically preclude the sort of national cult of personality we may see now in Trumpism. And indeed while progressives such as myself may bemoan the fact that American exceptionalism seemingly made the country largely resistant to socialism, we must also acknowledge that fascism historically had an equally hard time establishing a native foot-hold. Indeed while there have been movements which could certainly be described as fascistic (going back to the Confederacy itself), the United States has often seemed immune to the allures of such extremism, even as the novelist Upton Sinclair warned us that “It Can’t Happen Here” was a dangerous attitude to find comfort in.

What I argue is that Trumpism may in part signal a certain collapse of the American ideal, of a crisis within American civil religion itself. Writers like Thomas Frank at The Baffler have pointed out how the white, working-class supporters of Trump come from a place of legitimate economic grievance. When coupled with the subtle rhetoric of racial aggrievement engaged by the establishment Republicans since Richard Nixon’s “southern strategy (and who are now horrified by this monster that they have wrought), it is no surprise that Trump has found such wide-spread appeal. Indeed far from an attempt to “Make America Great Again,” Trumpism aims to redefine America by rejecting the expansive definition of the nation as offered by our traditional American civil religion. Trump supporters see America as an idea which has left them behind, and they are willing to abolish our understanding of the nation. This is precisely why consoling ourselves that even if elected Trump would somehow be moderated by constitutional strictures is so misguided in its optimism. The Constitution isn’t a magic document, its power is generated by the consensus our system has in agreeing to live by its structure. If the executive doesn’t believe in that structure it ceases to have the authority to protect us. If Trumpism represents a crisis of faith, which is of a transformation of American civil religion, it behooves us to find an alternative that is more appealing to his supporters, and more hopeful for the rest of us. Trump is but a symptom of the disease, even if he is hopefully defeated at the ballot box, the larger crisis of faith still remains.