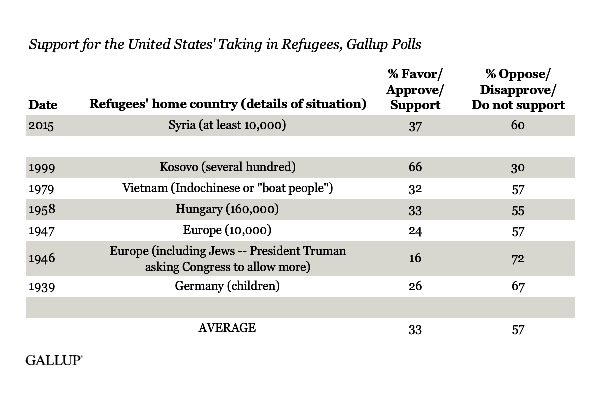 One of the key arguments put forth by those in favor of accepting Syrian refugees is that the United States has an ignominious history with this kind of thing — particularly as it relates to turning away Jewish refugees on the eve of World War II.

A few weeks back, The Post's Ishaan Tharoor summarized the reluctance to allow these Jewish refugees into the country. The pro-refugee crowd argues that a similar brand of xenophobia and bigotry could lead the United States to again turn away people in need of safe haven — and that the U.S. could again be made to regret not allowing them in.

Opponents of allowing Syrian refugees, meanwhile, disagree with this historic parallel. They argue that this time it's more about fear of potential terrorists being granted refugee status and coming to the United States rather than xenophobia or bigotry.

What's interesting about both the refugee debate today and back then, though, is that it's basically par-for-course — regardless of the reasons why some oppose refugees.

Gallup has detailed a number of instances throughout history in which Americans were confronted with potentially accepting refugees. And almost without exception, there has been significantly more opposition than support.