Fact Check: Did Ike deport over a million Mexican immigrants?

Donald Trump claimed this past week that his plan to deport eleven million or more Mexican immigrants is feasible.  Moreover, it wouldn't be a nightmare, as critics allege.

His proof?  Dwight Eisenhower deported over a million Mexicans in 1954 and Ike was nice. Historians immediately pointed out that the deportations carried out in the 1950s under Operation Wetback -- yes, this was the real name -- were often not nice.  Some people lost their lives.  See here and here.

Here are the facts as reported by Professor Hernández in her article, which was published in the Western Historical Quarterly in 2006:

1. The mass forced deportation of Mexican immigrants didn't just begin and end in 1954. It went on for a decade starting in the late 1940s after the end of World War II.

2.  It was coordinated with Mexican authorities.

3.  Tens of thousands of Mexicans were deported to coastal cities like Vera Cruz to stop them from easily returning to the United States. (50,000 were deported by ship over a two year period.)

5.  Up to one third of the people deported were repeat offenders, so it wasn't a million different people who were forced to return to Mexico during the critical period between the summer 1953 to summer 1954.

6.  Many people who were deported from the 1940s on were simply taken to the border and then allowed to return after they had received proper papers.

7. Thousands of people who were deported were American citizens.  These were the children born in the US of Mexican immigrants.

Here's the article and a key excerpt: 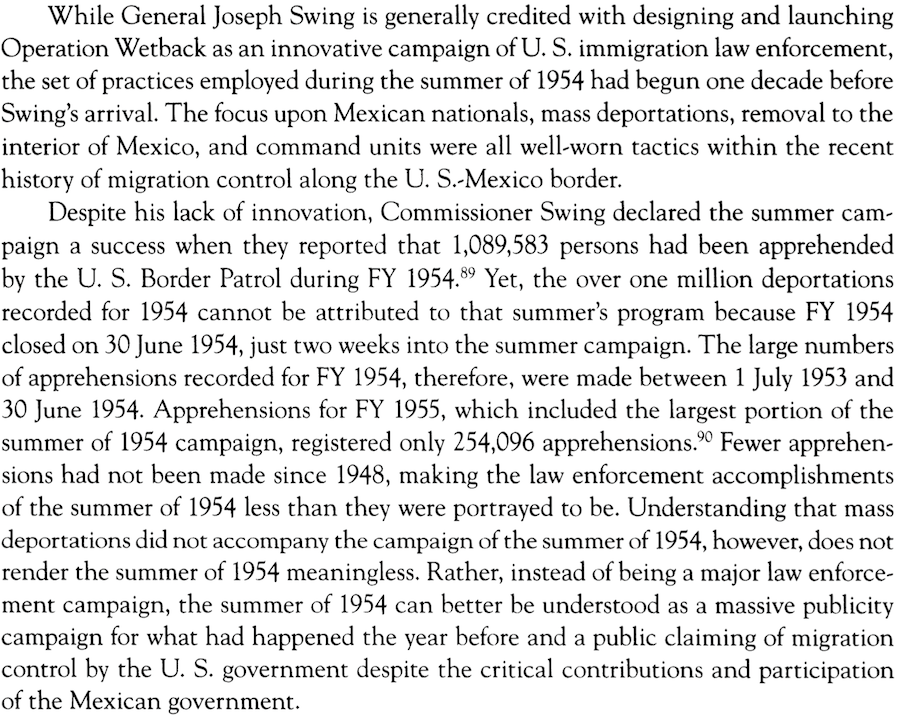