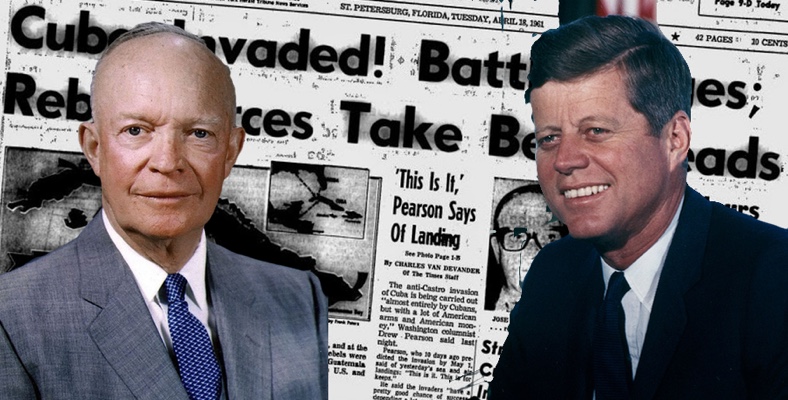 On April 17, 1961, over 1400 armed Cuban exiles landed at the Bay of Pigs in Cuba in the United States-supported effort to spark the overthrow of Fidel Castro’s regime. The invasion was an infamous disaster: the Cuban government, forewarned, defended with a force of more than 20,000, and 1202 of the exiles were captured and 114 killed in action. 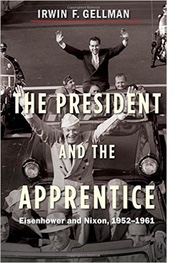 Historians generally accept the assertion that Dwight Eisenhower planned this invasion and left it for his successor, John F. Kennedy, to execute. The John F. Kennedy Presidential Library and Museum website, for instance, tells us that “before his inauguration, . . .Kennedy was briefed on a plan by the Central Intelligence Agency . . . developed during the Eisenhower administration to train Cuban exiles for an invasion of their homeland,” that “President Eisenhower approved the program in March 1960,” and that by November, “the operation had trained a small army for an assault landing and guerilla warfare.” Just days into his presidency, in February 1961, Kennedy authorized the invasion that he had inherited from Eisenhower.

The Kennedy Library’s account does not differ from those offered by Arthur Schlesinger Jr. in A Thousand Days and Theodore Sorensen in Kennedy, both books published in 1965. More recently, Howard Jones of the University of Alabama published The Bay of Pigs (2008) in the Oxford University Press series “Pivotal Moments in American History.” In offering essentially the standard narrative, Jones cites only documents at the Kennedy Library and none from the Eisenhower Library. One can sympathize with—if not quite excuse—Schlesinger and Sorensen’s attempt to deflect blame from a slain leader whom they had both worked for, but Jones’s refusal to examine critical documents at the Eisenhower Library four decades later is troubling, especially since those records tell a very different story.

Documents at the Eisenhower Library show that the president allocated approximately $13,000,000 to the CIA in March 1960 to explore options to remove Castro from power. He also approved the training of around 500 Cuban exiles in Guatemala. But as I have shown in The President and the Apprentice, he never ordered, or approved plans for, an amphibious assault on Cuba. Kennedy did not inherit the Bay of Pigs from Eisenhower; the idea and the planning came from within his own administration.

Last month I obtained an oral history that Eisenhower speechwriter Malcolm Moos conducted with the former president on November 8, 1966, but which had never been released. Ike points out in this interview that because he “didn’t want any resentment” due to the closeness of the election, he had instructed his Cabinet secretaries to help in the transition from his administration to Kennedy’s. He wanted his successor and his staff to be “as well informed in advance as they possibly could be.” The president had meetings with Kennedy on December 6, 1960, and January 19, 1961, in which they discussed many topics. In the oral history, Ike comments that Kennedy was primarily interested in the organization of the White House, the Cabinet, the National Security Council and staff and “had no idea of the complexity of the job.”

They also talked about Cuba. Eisenhower informed his guest that since March the United States had been training Cuban exiles “in small units, but we had done nothing else”: “some hundreds of refugees” in Guatemala, “a few in Panama, and some in Florida.” Before it would move any further, Ike says, the United States was waiting for the exiles to agree on a leader who was opposed to both Castro and the dictator Castro had overthrown, Fulgencio Batista, and who could unite a provisional government.

Eisenhower and Kennedy did not meet again until April 22, 1961, five days after the Bay of Pigs fiasco. President Kennedy sent a helicopter to Ike’s Gettysburg farm to fly him to Camp David, where they met for secret talks. The president, Ike recalls, never intimated that he had inherited any plans from the previous administration. He told Eisenhower that he had followed the advice of the CIA and the Joint Chiefs of Staff, and “everybody . . . had approved” of the invasion. Ike asked Kennedy if he had had open debates with everyone on the pros and cons, and whether he had explored the subject with the NSC. Kennedy smiled and replied that he had “a meeting of the people involved.”

As they walked around the compound, Ike recalls, he thought Kennedy seemed “more than a little bewildered.” Kennedy conceded: “You really don’t know what the complexities [are] and how tough this job is until you have it.” He added that the state department “thought that we should be very careful that our hand not show in this operation.” If the United States airplanes carried out airstrikes, the diplomats argued, there would be no question of American involvement. They persuaded him to cancel a second bombing run in support of the exiles because “the Soviets would be very apt to cause trouble in Berlin.”

Ike was astounded by this reasoning. Everyone would know that the United States been complicit. Where else would the invaders have gotten their ships, arms and communications? He also disagreed with the assumption that if the United States were known to be involved in the invasion, this would “embolden the Soviets to do something that they would not otherwise do.”

Ike says he told Kennedy that there was “only one thing to do when you go into this kind of thing. It must be a success.” The president replied: “Well, I assure you that hereafter if we get in anything like this, it is going to be a success.” Ike answered: “Well, I am glad to hear that.”

Having the benefit of hindsight, of course, Ike could have constructed a self-serving description of these meetings to deflect the blame for a disastrous mission—except that his version fits the documentary record much better than the standard account. It is also more plausible for another reason. In World War II, Eisenhower had directed the largest and most complex amphibious invasion in world history. He knew how to do “this kind of thing.” To think that he would have approved such a sloppily planned operation as the Bay of Pigs attack is, on its face, absurd. The time has come for everyone—even the Kennedy Library—to acknowledge that this debacle belongs solely to JFK.