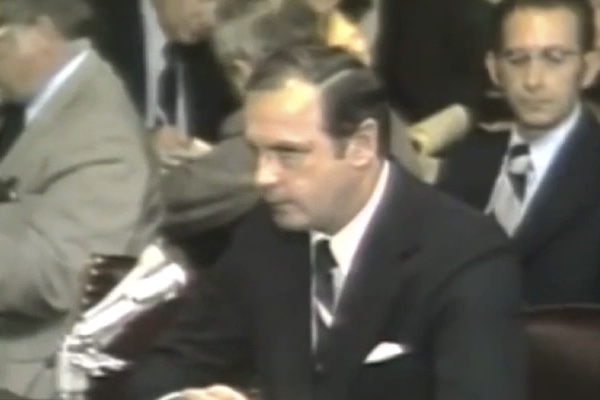 The Last of the President’s Men, Bob Woodward’s latest revival of Richard Nixon and the Watergate scandal, is also an airbrushing of history and Woodward’s role as a player in, not an observer of, the events that brought Nixon down. 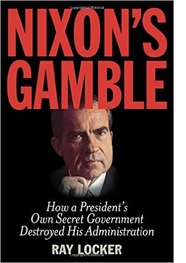 Woodward elevates Nixon aide Alexander Butterfield to a historical position he does not deserve by presenting a handful of documents Butterfield took with him as major historical artifacts. They are not.

Instead, Woodward glosses over the events during which he twice referred Butterfield to the staff of the Senate Watergate Committee. In the latest book, Butterfield tells Woodward that he would not have testified before the committee if not for Woodward. Without Woodward, Butterfield would not have revealed the existence of the taping system that Nixon installed to record his conversations for posterity.

Nixon’s Gamble, my new book about Nixon’s creation of a secret government inside the White House and the divisions it created, shows how Woodward’s pushing of Butterfield on the Senate Watergate Committee had less to do with Butterfield’s desire to do the right thing and more with the need of some administration figures, primarily chief of staff Alexander Haig, to save themselves. The main revelations include:

● How Woodward went to his friend Scott Armstrong, whom he helped get a job at the Senate Watergate Committee, on May 17, 1973, the day after Woodward’s late-night meeting with his secret source, Deep Throat, who told Woodward a series of revelations that turned out to be either false, already printed in other publications or irrelevant.

● That Butterfield wrote extensive notes, later subpoenaed by the Watergate committee, about his potential testimony to the panel and what he would say. The notes clearly show that Butterfield was not taken by surprise when he was called to testify and that he knew and feared what the testimony could reveal.

● How Haig knew of the White House taping system soon after he took the job in May and had botched attempts to use executive privilege to limit revelations damaging to Nixon.

● How the real source of information about Butterfield’s alleged role as the White House chief of internal security came from through a former FBI official, William Sullivan, who feared being implicated in a series of FBI wiretaps on government officials and journalists that also endangered Haig and National Security Adviser Henry Kissinger.

Woodward knew from Armstrong almost immediately that Butterfield had revealed the taping system, but the Washington Post did not write about the tapes until after Butterfield identified them before the Senate. Woodward sat on the information in a way that served the interests of Haig, who had earlier told aide Larry Higby, who also knew about the tapes, to testify honestly if asked about them.

Woodward has never told the truth about his relationship with Haig, whom he met while Woodward was a naval officer delivering messages to the White House for his bosses at the Pentagon. Four Nixon administration officials – Defense Secretary Melvin Laird; Adm. Thomas Moorer, the chairman of the Joint Chiefs of Staff; Defense spokesman Jerry Friedheim and Roger Morris, an NSC official – have given on-the-record interviews in which they said Woodward knew and briefed Haig on military matters. The interviews, taped and transcribed, are now part of the Colodny Collection at Texas A&M University.

Butterfield's revelations about the tapes came as a member of the Senate committee, Lowell Weicker of Connecticut, was pushing hard to have the panel call Sullivan as a witness to testify about internal security and the White House's use of the FBI to wiretap 17 government officials and journalists. If Sullivan had testified truthfully, it would have been devastating to him, Haig and Kissinger, who had coordinated the wiretaps. After all, the wiretapping would become a major part of the second article of impeachment voted against Nixon the following year.

Butterfield's testimony about the tapes forever changed the nature of the Senate investigation and the work of the Watergate special prosecutor, as they focused almost exclusively on getting access to the tapes.

These events are outlined thoroughly in Nixon's Gamble and backed extensively by documents, while Woodward relies on Butterfield's self-serving memories and a handful of papers Butterfield had removed from the White House.

As I recount in Nixon's Gamble, Sullivan

met with Woodward on March 5 at a bar near his longtime home in suburban Prince George’s County, Maryland. Inside the bar, which Woodward described as “an old wooden house which had been converted into a saloon for truckers and construction workers,” Sullivan pitched Woodward a tale of a “vigilante squad” in the Justice Department run by former Assistant Attorney General Robert Mardian that spied on journalists. Woodward’s notes, now archived at the University of Texas in Austin, show that Sullivan told Woodward that “Mardian headed an out-of-channels vigilante squad of wiretappers that did, as Time reported, tap phones of reporters, including Hedrick Smith and Neil Sheehan for several weeks after Times refused to stop Pentagon Papers publication. authorization by Mitchell and FBI only found out about it indirectly. said this was very closely held knowledge and Gray could deny it under oath because his knowledge was ‘out of channels.’ “ Sullivan, Woodward’s notes showed, “said he presumed that Hunt or Liddy, or at least Liddy, worked on the squad. this is part of the reason that Mitchell and Mardian are out. said everything is destroyed about it and only maybe six to eight people have firsthand knowledge of it.” Mardian’s team, Sullivan continued, eventually became a political operation at Haldeman’s request.

Four distinct pieces of evidence point to Sullivan as the source on March 5. Only Sullivan used the term out of channels when referring to the FBI wiretaps. Mardian told FBI investigators in May 1973 that Sullivan used that term in reference to the taps, and Mardian repeated that when he testified before the Senate Watergate Committee in July. Sullivan also peddled the false vigilante squad story to others, particularly Senator Lowell Weicker, the Connecticut Republican and member of the Watergate committee. FBI files and Weicker’s notes detail Sullivan’s allegations about Mardian to Weicker, which were also reported in October 1973 by the New York Daily News. “The Sullivan interviews, undertaken over the past several weeks by committee member Sen. Lowell P. Weicker (R-Conn.), reportedly have elicited a number of ‘solid leads’ from the onetime FBI official,” the Daily News reported. “Sources said Sullivan had implicated former Assistant Attorney General Robert C. Mardian in the alleged White House dictated spy plot against the Democratic Party.” The source’s comments on March 5 were completely different from what Felt told [Time magazine reporter] Sandy Smith a week earlier. If Felt wanted to damage Gray and Sullivan, he would have repeated the same story to Woodward. The fact the source concocted a false story to divert Woodward’s attention from the real FBI wiretaps shows he had something to hide, and Sullivan had more to hide than most. Finally, the bar was close to Sullivan’s home in suburban Maryland, while Felt lived in Fairfax, Virginia. The sole beneficiary of Deep Throat’s tip to Woodward on March 5 was Sullivan, because it shifted the focus from the wiretaps and him to Mardian, who was under investigation for his connections to Watergate. In that context, the accusation of Mardian made sense. Because Sullivan’s tip to Woodward was so misleading, it lingered in the reporter’s notes for almost two months, as he and Bernstein struggled unsuccessfully to corroborate it.

All of these are reasons to distrust Woodward, Butterfield and their smokescreen created in The Last of the President's Men.