How Unprecedented Is the Mass Migration of Peoples Today? 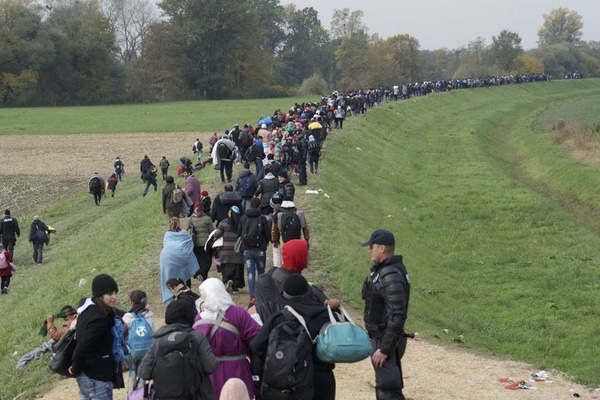 The New York Times published a recent article by Rod Nordland, entitled, “A Mass Migration Crisis, and It May Yet Get Worse.” Recognizing that the worldwide mass migration crisis can get worse is vitally important, but understanding the devastation of past mass migration crises is also important if leaders and citizens are to apply the most humane responses to relieve current conditions.

The New York Times article says the migration of millions of people heralds a new age. It is a new age but not a new crisis. The Times reported that at 60 million the current crisis of refugees pouring from the Middle East and Africa into Europe signals a new age because there are now more human refugees in the world “than at any other time in recorded history.” 60 million is a major crisis, but taken as a percentage, it is comparable to earlier mass migration crises that challenged or devastated previous people and places. Given the population of more than 7 billion in the world today, 60 million is 0.85 percent of the world’s total population. Other eras had equal and higher percentages of mass migrants. And humans survived, settled, and prevailed.

And 3. “The entry into Europe [that] occurred about 45,000 years ago,” corresponding with the disappearance of the Neanderthals. These migrations were caused by upheavals in the environment and conflicts among people.

The New York Times article says the current mass migrations are a result of “failed states, unending wars, intractable conflicts.” Humans are fleeing because of “persecution, poverty, ethnic and religious strife and war.” This was the case, according to geneticists, in ancient times as well. But so were natural and environmental disasters. The reporter describes how climate change is roiling societies, and explains that Syria is gripped by a prolonged drought that began before the never-ending war. The detail in the article that also caught my attention is the description of the large parts of sub-Saharan Africa that are becoming uninhabitable.

This reminder about uninhabitable environments is one that harks back to earlier generations. When I did my family’s genealogy and did DNA comparisons, I discovered my own connections to mass migrations and human DNA history.

When Roots DNA in London used the Cambridge University database to trace my DNA, the geneticists informed me that because my DNA and my father’s DNA, traced by the geneticists, Dr. Michael Hammer and Dr. Elizabeth Wood, of the Human Evolutionary Genetics Lab at the University of Arizona, matched a small minority of humans who are almost extinct, our DNA was rare. Some of our DNA matches were found only in people living in refugee camps across Africa and the Middle East. They said the majority of West Africans and African American descendants have maternal mitochondrial DNA classified as haplogroup L1 and L2, but mine is haplogroup L3. They explained that haplogroup was the small group of ancient humans who migrated in-and-out of Africa 60,000 to 100,000 years ago.

My family’s DNA is unique, not only in terms of African and ancient human mass migrations, but in terms of colonial and modern Western world migrations. Geneticists say the mass movement of humans from Africa to the Americas during slavery was the largest example of “mass migration or colonization” of people moving from one continent to another. I read books such as L.L. Cavalli-Sforza’s, The History and Geography of Human Genes, to understand the full meaning, not only of human DNA, history and the interblending of modern people who migrated and settled, but of ancient human conflicts and mass migrations. So the news of the current migration crisis, the movement of people from war-torn Syria, other places in the Middle East, and other environmentally and economically devastated parts of the world to more habitable places – is reminiscent of human history, as told by the geneticists.

Our entire DNA tells a story of migrations, wars, conquests, settlements, resettlements, and man-made and natural crises. Population geneticists tell a story of human origin, migration, blending and survival. When I traced the first millennium migration of my main African ancestors, the Asante, Fante and Akuapem people of Ghana, I tracked how these ancient ancestors were soldiers and farmers to the kings of Ancient Ghana, before they migrated south. The Asante and Fante Akan people resided in the north when it was a rain forest, before the region was parched by droughts and became the Sahara Desert.

Population geneticists also describe the impact of mass migrations on the Bantu, when farmers and soldiers invaded, conquered and settled with indigenous hunter-gathering people in Africa.

After I completed researching my major West African Ghanaian Akan ancestors, I researched the smaller minor groups of indigenous people my Akan ancestors – the Asantes and Fantes – conquered, settled and blended. When I telephoned an Asante ancestral relative now living in Brooklyn, New York to ask to interview his Guan wife, he said she could not speak to me, because when they were married, she agreed never again to speak of her Guan ancestry. The Guans are a small ancestral group of indigenous people and farmers who blended with my Akan ancestors. They became the people of Akuapem when Akan soldiers conquered them and settled with them on their farms. When I researched my Guan ancestors, I discovered that some Guan groups and other small indigenous groups were not counted in the Ghana Census.

Mass migration, like conquest, is complex, so we need to view the current mass migrations in terms of what is shown in our DNA. We are all interblended, interconnected with human groups who migrated and settled before. What formerly was lost to history can now be recovered with the help of DNA.