Review of Richard Drake’s "The Education of an Anti-Imperialist: Robert M. LaFollette and U.S. Expansion" 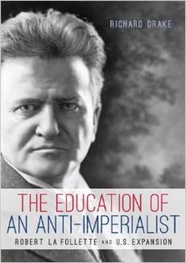 With the imminent formal entrance of Wisconsin Governor Scott Walker into the crowded field of Republican Party Presidential contenders, it is well worth remembering that the state of Wisconsin has a progressive historical legacy far removed from Walker’s dismantling of unions in the public sector. Accordingly, Richard Drake, professor of history at the University of Montana, offers an alternative reading of Wisconsin state politics as well as foreign and domestic policies in his biographical examination of Wisconsin Republican Congressman, Governor, and U.S. Senator Robert LaFollette, who sought the Presidency in 1912 and 1924. Drawing upon an extensive investigation of LaFollette’s voluminous correspondence and a close reading of LaFollette’s Weekly Magazine, Drake explains how the progressive politician’s critique of big business and monopoly threats to American democracy was extended into a denunciation of American imperialism. As LaFollette expanded his education into foreign policy issues, the progressive insurgent broadened his understanding of how business interests sought to manipulate diplomacy in the pursuit of profits. His faith in benign American expansionism was forever shattered by the Versailles Treaty and its aftermath.

Although LaFollette certainly earned his reputation as a critic of monopoly, Drake points out that he initially expressed little interest in American foreign policy. Coming from a farming family in Wisconsin before pursuing a career in law and politics, LaFollette believed in the agrarian individualism of Thomas Jefferson and Abraham Lincoln. This republic of independent producers was endangered by the growth of monopolist corporate interests following the American Civil War. Lafollette perceived it as his duty to battle against predatory big business and restore the garden of the early republic. In order to achieve this goal, LaFollette advocated such reforms as railroad regulation and the direct primary, but the Wisconsin politician paid scant attention to foreign policy. For example, he championed American entrance into the Spanish-American War, and even the brutal repression of the Filipino insurrection failed to raise the ire of LaFollette, who insisted upon describing his friend William McKinley as a supporter of American democracy and the producer republic. The anti-imperialist campaign of William Jennings Bryan and Mark Twain’s rhetorical attack upon American empire failed to elicit the interest of LaFollette.

In 1912, however, LaFollette displayed a more critical voice in his denunciation of Theodore Roosevelt as a man who betrayed the progressive cause while embracing the New Nationalism and efficiency of big business. The Wisconsin progressive was also a detractor of President William Howard Taft, whose dollar diplomacy encouraged American business exploitation of Mexico. When the Democratic candidate, Woodrow Wilson captured the White House in 1912, Drake documents that LaFollette hoped the professor in politics might usher in a new era of reform. LaFollette, however, was discouraged by legislation such as the Federal Reserve Act, which he perceived as fostering monopolistic banking practices.

LaFollette was also concerned with Wilson’s neutrality policies regarding the war in Europe. The progressive argued that the Wilson administration’s focus upon German submarine warfare while neglecting to challenge British naval mining of the seas hardly constituted a policy of neutrality. The Wisconsin Senator also denounced loans advanced to the British as designed to bring America into the war on the side of the Allies. In common with other progressives such as Senator George Norris of Nebraska, LaFollette believed that American entrance into the conflict would only benefit the bankers and munition makers, while increasing the power of the state and threatening civil liberties. LaFollette’s opposition to the war encouraged his critics to brand the Senator as disloyal.

Drake, however, documents that once America entered the war, LaFollette supported the national military effort, believing that an American victory might usher in a better world. Thus, LaFollette was thrilled initially by the Wilsonian rhetoric of the Fourteen Points and “a peace without victory.” When the Versailles Treaty failed to fulfill the promise of Wilson’s Fourteen Points, LaFollette emerged as a leading opponent of the postwar settlement. The Senator insisted that the League of Nations would not constitute an international body in pursuit of peace. Similar to the Holy Alliance formed at the Congress of Vienna following the Napoleonic Wars, the League would serve to enforce the status quo and lead the United States in opposing the self-determination of people such as the Irish. In other words, the post war settlement would further the imperialistic ambitions of the French and British that American business interests were now embracing. LaFollette was especially concerned with the Draconian terms imposed upon the German people, and he predicted that the severe punishments placed upon Germany by the Versailles Treaty would provoke another European war. The Senator was also critical of how the Turks and Arabs were treated as the French and British conspired to contain Arab nationalism and impose European imperialism while benefiting Western oil companies. As Drake observes, the post-World War I agreements imposed upon the Middle East paved the way for today’s chaos in the region.

LaFollette also closely followed the Russian Revolution and the publication by the Soviets of the secret treaties revealing the imperialistic origins of the Great War. The Senator found himself drawn at first to the Soviet experiment, and he even opened the pages of his magazine to articles published by V. I. Lenin. He also condemned Wilson’s military intervention in the Russian Civil War and called for a policy of neutrality toward the Bolshevik regime. Nevertheless, after a 1923 trip to the Soviet Union, LaFollette changed his policy. His fundamental belief in the principle of democracy would not allow him to embrace the dictatorship of the proletariat. Similar to liberals of the Cold War era, LaFollette maintained that progressives would be compromised if they cooperated with communists, who could not be trusted. Drake concludes that LaFollette “looked to American history for his heroes. Lincoln, Washington, and Jefferson left Marx trailing far to the rear” (415).

Despite the return to the apparent “normalcy” of conservatism and business expansion with the election of Warren G. Harding to the Presidency in 1920, LaFollette retained his belief in the American people; making a run for the Presidency in 1924 on an independent Progressive Party ticket. Expiring from illness shortly after the exhausting Presidential run, LaFollette never lost the faith; although he feared for the future of American democracy manipulated by media and business monopolies. Drake writes, “The cause of authentic democracy in America depended for its ultimate triumph on the success of the country’s true patriots in thwarting the imperialistic schemes of our masters of finance and their complaisant politicians. For the protection of their investment abroad, the financial elites were prepared to make America a permanent garrison state connected with right-wing dictatorships around the world for the purpose of supervising wealth extraction from captive populations” (369).

Indeed, the American empire feared by LaFollette has become a fact of life in the twenty-first century with military bases throughout the world in the service of American capitalism. Drake chronicles the intellectuals and politicians, many of them published within the pages of LaFollette’s Weekly, who educated the Wisconsin progressive regarding the dangers posed by an American empire. LaFollette’s anti-imperialist education was guided by John A. Hobson, John Maynard Keynes, Francisco Nitti, Amos Pinchot, Richard F. Pettigrew, Scott Nearing,
Edwin Borchard, Frederic C. Howe, and Lincoln Steffens. In addition, Drake notes the significance of the King-Crane Report, commissioned by President Wilson, who, nevertheless, ignored the report’s warning regarding the Arab sense of betrayal due to the demands of French and British imperialism coupled with the threat of a Jewish state in Palestine. Intellectually curious and a student of history willing to learn from the past, LaFollette abandoned his support for expansion and embraced anti-imperialism; warning that militarism and exploitation of world resources by American business interests would threaten the nation’s democratic traditions. Recognizing the dangerous reality of American imperialism and acknowledging the myth of American exceptionalism, the progressive LaFollette became an anti-imperialist in response to World War I and the Versailles Treaty. It is an intellectual odyssey that Scott Walker seems unlikely to undertake, but a serious examination of the economic origins of American foreign policy is necessary in order for citizens to question dangerous contemporary Wilsonian arguments regarding America’s duty to make the world safe for democracy.