What Reagan Learned from FDR

H. W. Brands is the author, most recently, of "Reagan: The Life." 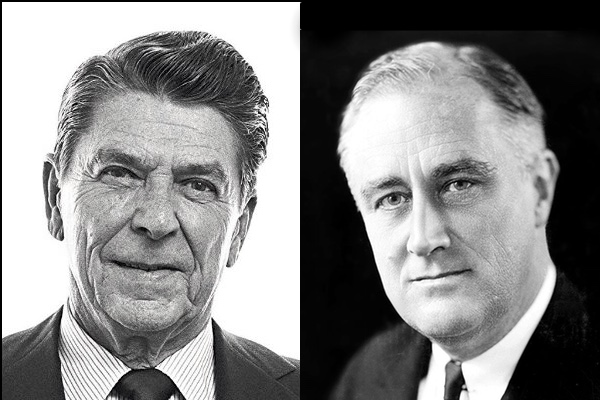 Many of the Republicans who have made an icon of Ronald Reagan would be shocked to know that his first inspiration in politics and his continuing model for presidential leadership was that bête noire of American conservatives, Franklin D. Roosevelt. But Reagan himself never disguised the debt he owed Roosevelt and the lessons he learned from the author of the New Deal. 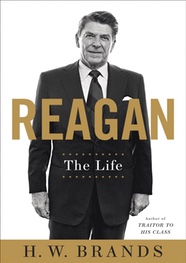 The lessons started early. Reagan recalled hearing Roosevelt deliver the first of the Fireside Chats. “His strong, gentle, confident voice resonated across the nation with an eloquence that brought comfort and resilience to a nation caught up in a storm and reassured us that we could lick any problem,” Reagan wrote in his memoir. “I will never forget him for that.”

The New Deal touched the Reagan family in a personal way. Reagan’s father, Jack Reagan, had never managed to hold a job for long, and the Great Depression made his breadwinning all the more difficult. But the New Deal came to his rescue, giving him work helping to administer federal relief. Jack’s son extrapolated from the Reagan household to the country at large. “I soon idolized FDR,” Reagan declared. “He’d entered the White House facing a national emergency as grim as any the country has ever faced and, acting quickly, he had implemented a plan of action to deal with the crisis.”

Reagan’s devotion to Roosevelt accompanied the Illinoisan to Hollywood, where it was reinforced by the liberalism of much of the movie community. But Reagan’s philosophy began to change after FDR’s death, when a bitter labor dispute in the film industry exposed Reagan to the rough tactics of radical leftists in the union movement. Credible threats to his person caused him to carry a firearm for protection and to reconsider his support for liberal causes. Tax rates that topped 90 percent for one in his income bracket added a pocketbook element to his rightward shift. Finally as his film career plateaued, he shifted to television, where he became the host of the General Electric Theater and spokesman for one of the largest companies in industrial America. Reagan wasn’t the first person, in politics or elsewhere, to learn to believe what necessity required him to say.

In 1962 he formally abandoned the Democratic Party for the Republicans, and in 1964 he riveted Republican voters with a televised speech nominally on behalf of Barry Goldwater but practically in the service of Reagan’s own emerging political ambitions. Goldwater’s defeat left Reagan as the standard-bearer of Republican conservatism.

As a conservative, Reagan was twice elected governor of California; as a conservative he was elected president of the United States. In his first inaugural address, Reagan uttered a line that became the anti-liberal credo of his party: “Government is not the solution to our problem; government is the problem.” To Republican conservatives, the New Deal summarized most of what was wrong with America; to the extent they politically could, they determined to reverse the leftward trend the New Deal had set in motion. Reagan stood at their head, leading anti-New Deal charge.

Yet Reagan never lost his respect for Roosevelt. As president, Reagan appreciated more than ever the magic of the Fireside Chats, Roosevelt’s tool for mobilizing public opinion. By the 1980s television had supplanted radio as the broadcast medium of political choice, and Reagan exploited it just as Roosevelt had exploited radio. During the first six months of his presidency he repeatedly spoke to the American people, urging them to support his agenda of tax cuts. His close brush with death when an assassin’s bullet stopped an inch from his heart reminded older voters that Roosevelt too had survived an assassination attempt, and Reagan’s humor and grace under this unexpected pressure—“I hope you are all Republicans,” he said to the doctors who were about to remove the nearly fatal slug—made his tax program as irresistible to voters and to Congress as Roosevelt’s New Deal had been a half-century earlier.

Throughout his presidency Reagan cited FDR. To members of his Cabinet and National Security Council he described Roosevelt’s efforts to quarantine fascist aggression in the years before World War II; Reagan intended to act with similar foresight (and greater effect: Congress had been slow to heed Roosevelt) against communism. After Reagan successfully spurred Congress to bolster the finances of Social Security, he signed the bill with a nod to the father of Social Security: “Today we reaffirm Franklin Roosevelt's commitment that Social Security must always provide a secure and stable base so that older Americans may live in dignity.” In kicking off his reelection campaign in 1984, with the predictable assertion that more remained to be done, Reagan said, “Franklin Roosevelt told us fifty years ago this month: ‘Civilization cannot go back; civilization must not stand still. We have undertaken new methods. It is our task to perfect, to improve, to alter when necessary, but in all cases to go forward.’”

In one of his final acts as president, Reagan joined a celebration of the fiftieth anniversary of the founding of the Franklin Roosevelt presidential library. Reagan recalled the dark days of the Depression and reasserted his debt to Roosevelt. “All across the nation, millions of new voters looked at this president who was filled with confidence in the future, faith in the people and the joy of the democratic rough-and-tumble, and they said to themselves maybe someday they, too, would like to serve the nation in public life,” Reagan said. “I was one of those millions.” Reagan explained that he had experienced in his own political career what Roosevelt had taught: that there is no force more potent than Americans’ confidence in their country’s purpose and destiny. “To my mind, as one who has served in the office FDR once graced so magnificently, no higher tribute can be given a president than that he strengthened our faith in ourselves.”

Reagan’s accomplishments mirrored those of Roosevelt. In one respect the mirroring was quite like an actual mirror, switching left for right and right for left. Roosevelt, arriving in office when the conservative order of the 1920s had collapsed, pushed the pendulum of power in a leftward direction; Reagan, entering the White House after the liberalism of the Great Society had lost its way, pushed the pendulum back toward the right. In foreign affairs, their accomplishments were more parallel. Roosevelt defeated fascism, the first version of modern totalitarianism; Reagan pushed communism, the second version, to the brink of dissolution.

For obvious partisan reasons, Republicans today prefer to ignore the Reagan-Roosevelt connection. Yet Reagan took nothing but pride in it. Roosevelt showed what a president can achieve by tapping the power of the American people, and Reagan was nothing if not an apt pupil.