Rebecca Hill is Associate Professor of Interdisciplinary Studies and Director of American Studies at Kennesaw State University. She is the author of “Men, Mobs and Law: Anti-Lynching and Labor Defense in U.S. Radical History” (Duke University Press: 2009). It is not a microhistory. Her articles have appeared in Labour/Le Travail, Labor: Studies in Working Class History of the Americas; American Quarterly and New Left Review. 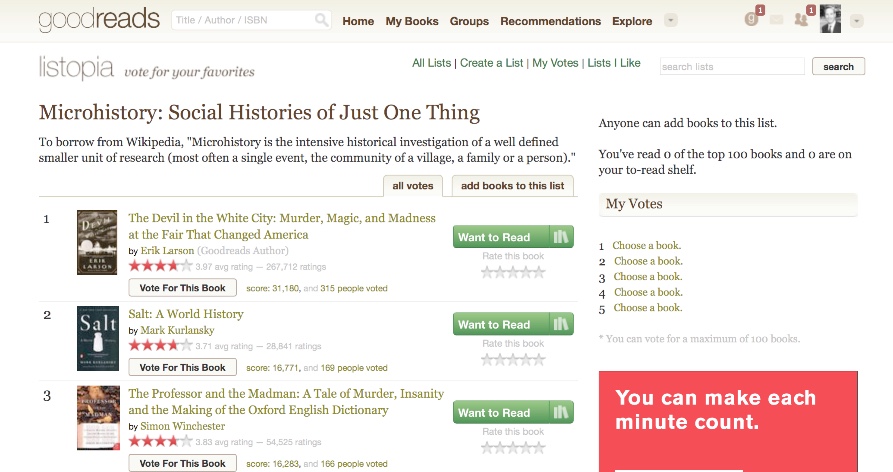 Historians might want to think about becoming active participants in the “bookternet,” the Internet’s social media communities for book-lovers. Book-publicist Rachel Fershleiser describes the bookternet as a way to form community around the solitary pursuits of reading and writing. Publisher’s Weekly featured a forum on the subject earlier this year on which columnist Clive Thompson and others talked about how difficult it is to "monetize conversations" among “far-flung communities” of knitters and snow-boarders. It's also a way for writers to connect to their readers. One important node on the bookternet is Goodreads, a site where readers share reviews and commentary about what they are reading or plan to read. This website allows readers to follow writers they like and create genre-based lists. They can also join fan groups who read various genres from the group for “mysteries and thrillers” to one entitled “History is not boring.”

One of Goodreads’ more popular history lists was created in 2008 with the title, “Microhistory: Sweeping Social Histories of Just One Thing,” by “Blueguitar411” a public librarian in New York, who was developing a book display for her local branch library. Her definition of the word microhistory builds on Wikipedia’s: “an intensive historical investigation of a well-defined smaller unit of research (most often a single event, the community of a village, family or a person)” but substitutes the words “general concept” and “trend” for “family or a person.” Many people, judging from the 1158 “likes” for the list, and the number of voters for each individual book on it, agree that some of the best exemplars of microhistory are Mark Kurlansky’s Salt: A World History and Mary Roach’s Stiff: The Curious Lives of Human Cadavers. The list also includes titles on the history of marriage or cancer because they focus on a single topic. Right now, the list contains nearly 900 books. Carlo Ginzburg’s The Cheese and the Worms: the Cosmos of a 16th Century Miller, the book most historians identify as the paradigmatic example of the genre, is way down the list with just six votes.

But there’s a problem. The problem is that the definition of microhistory sounds plausible enough to be persuasive, but is oxymoronic. I’ve thought of various analogous mis-definitions: “Marxist Historiography: Books about How Ideas Can Change the World,” or “Post-Modernism: Books that Tell the Truth about the World Today.” The definition is also too broad. Almost any book of non-fiction could be defined as being about "just one thing" -- whether that one thing is a battle, a disease, the Mediterranean world, your favorite cocktail, a year in world history, or the story of a 16th century heretic known as Menocchio.

This Goodreads list has become the definitive source for general readers of nonfiction and is the reference to which a number of online articles about microhistory and public library bibliographies now point. This year, the popular bookish online community, BookRiot created a 24-category reading challenge (read a book by a GLBTQ author; read a book by an author from Africa, etc. You can find it here in which thousands of eager readers, myself included, are participating. Task ten on this list is microhistory, and it also refers to this Goodreads list for its definition, which is how I found it.

Recalling how excited I was when I first read the Cheese and the Worms or how much I learned from Patricia Cline Cohen’s The Murder of Helen Jewett, I went on a quixotic mission to introduce the original definition of microhistory to BookRiot and their followers. I was able to draw on a number of resources, including Wikipedia. It was in 2005 that the definition of the word began to change, which you can see in discussion around the Internet. At Wikipedia’s “talk microhistory” link, the site’s editors explain why the work of “Kurlansky et al” is not microhistory. In 2005, the History News Network noted Arthur Krystal’s use of the term “microhistory” for commodity histories like Kurlansky’s, and in 2006, featured an article by Sigurdur Gylfi Magnusson entitled, “What is Microhistory?” reconnecting the term to the 1970s generation of writers interested in the “normal exception” to the story of broad historical patterns unearthed by the Annales school. Magnusson headed the Microhistory center and journal based in Iceland, on the web at microhisotry.org. There are also a few historians who have blogged about the subject. (See for example, Brodie Waddell’s blog here). Another historian joined me in the effort to revise the definition. Responses to our comments were varied, some interested, but many defensive. I was called a “book snob.” As the argument got heated, BookRiot’s moderator deleted one of my new friend’s comments for “name-calling.”

Meanwhile, at Goodreads, other readers started trying to fix the microhistory bibliography in September 2014. They started deleting books that weren’t “sweeping social histories of just one thing.” One librarian remarked, “Biographies shouldn't be on here, nor should accounts of particular historical incidents.” I don’t know how many microhistories were deleted, but I suggested that rather than deleting books, it would be better to change the list title, and then start a new microhistory list with a different definition. I renamed the old list “commodity history.” An infuriated Goodreads user switched the title back, referring to my action as “brazen,” my definition “stringent.” Microhistory should be defined broadly enough, she argued, to include both commodity histories and books like A Short History of Rudeness by literary scholar, Mark Caldwell. By the popular vote, it’s true, that book beats both The Return of Martin Guerre and The Cheese and the Worms.

For historians, seeing this list and talking to its supporters is like entering a strange land. Popular books about the very same subjects that preoccupied the Annales school historians: diseases and diet through the ages (and how these have changed world history on a grand scale) are now the exemplars of microhistory. It’s as if a mystery-writer came across a group of readers who really liked what you and I call science fiction, but lacked a name for the genre. This group then decided that these books should be called "mysteries" because the subjects are strange, and made a list for science fiction books with the title, "Mystery: a narrative work about fictional characters dealing with the unknown, most often about outer-space." Then other readers started adding their favorite novels until the list came to embrace the entirety of fiction (because you don’t know the ending until you get to the end). At that point, another group of people, identifying themselves as in-the-know, would attempt to bring the list back to its original definition by expunging such inappropriate books as The Adventures of Sherlock Holmes because they are not set in outer-space or another dimension. If any actual mystery writers chimed into the discussion, they would be utterly ignored, seen as exotic representatives of some obscure knowledge community, or castigated as annoying language police who want to ruin mystery reading for everyone.

However, not every reaction has been defensive. Some people have begun to ask me, "Is X a microhistory?” I want to be supportive, but I’ve noticed that many of the “Xs” are focused studies of current events. This micro-battle has taught me something about how general readers think about history itself. If we look at Amazon’s “history” best-sellers list, we’ll see few works by academic historians and a plethora of journalistic studies of current events. “Five minutes ago” is the historical past and historical research means interviewing people about what they did last year. While I believe that oral history is a valid method, I also think there’s a value in learning about eras whose players are all dead and about whom sources are hard to come by and tricky to interpret.

I’ve been recommending books to people and I think a couple of them are going to read Melton Mclaurin’s Celia, a Slave. Another person, using my definition, found Greg Grandin’s Empire of Necessity. It’s been worth the price of the insults. As the Publisher’s Weekly article I mentioned above suggests, historians could find new readers for important but forgotten books by participating in social media spaces like Goodreads, and BookRiot. There we will meet book-lovers of all types. Many of them are interested in history, but they may not agree with us about what it is.