Dr. Yoav Tenembaum is a lecturer at the Diplomacy Program at Tel Aviv University.  He holds a Doctorate from Oxford University and a Masters in International Relations from Cambridge University.  His works on international law have been published worldwide. 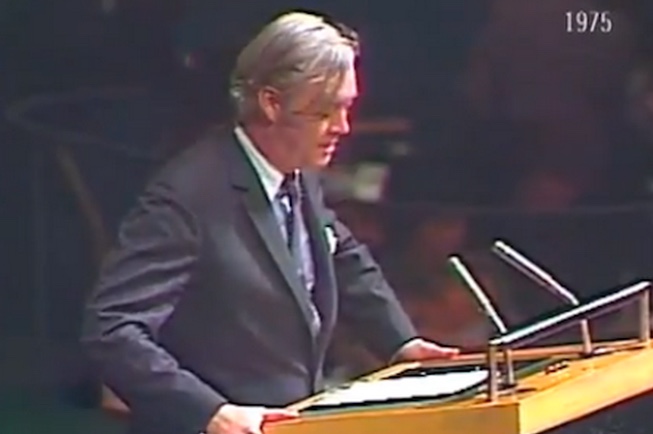 Forty years ago this year, the General Assembly of the United Nations (UN) adopted a resolution equating Zionism with racism and racial discrimination.

Resolution 3379, which was adopted on November 10, 1975, stipulated that “Zionism is a form of racism and racial discrimination.” Seventy-two countries voted in favor of the resolution, thirty-five were against, and thirty-two abstained.

Although General Assembly resolutions are usually not legally binding, their influence on the development of public international law can be significant, as Professor Malcolm Shaw has stressed in his best-seller book International Law. Further, their political echo may resound more loudly in the realm of international diplomacy than many a legally-binding resolution.

A memorable image of that day has remained rooted in the collective consciousness of Israelis: that of Israel’s ambassador at the United Nations, Haim Herzog (who was subsequently to become President of Israel), tearing the resolution in half as he concluded his speech at the General Assembly of the UN. His speech, alongside that of the United States Ambassador, Daniel Patrick Moynihan, is recalled by many contemporaries as memorable also for its rhetorical power and analytical rigor.

The resolution caused a profound effect not only in Israel and among Jews worldwide, but also among many people in democratic countries. The name of streets in Israel bearing the name of the United Nations was changed into Zionism. In the United States, citizens bore buttons on their lapels saying, “I am a Zionist.”

Mexico, which had voted in favor of the resolution, was ostracized by many in the United States who refused to visit the country.

The uproar caused by the resolution went well beyond the realms of diplomacy. The automatic coalition of Communist, Arab, and third world countries, which passed the resolution produced on this occasion an unprecedented scenario of disgust among many people in the democratic world,who thought that the United Nations had gone beyond the pale.

Instead of being a legal framework and diplomatic arena aimed at ameliorating conflicts and enhancing international understanding, the United Nations became the focus of sharp discord and deep animosity. Its prestige as an international institution had reached its lowest ebb. A phenomenon that would recur in subsequent years had become an integral part of its institutional personality: a combination of authoritarian and totalitarian states had taken hold of its agenda in a futile attempt to distort history and spread hatred.

The United Nations, which should have conveyed a message of mutual respect and reconciliation, was suddenly identified with bigotry and discrimination.

It should be stressed: the General Assembly did not pass a resolution that could be construed as being merely hostile to Israel. The resolution it adopted equated Zionism, the national liberation movement of the Jewish people, with racism and racial discrimination, an unprecedented step. After all, it was the United Nations that had called for the creation of a Jewish state on November 29, 1947 (General Assembly Resolution 181). Israel was admitted subsequently as a full-fledged member of the United Nations on May 11, 1949 (General Assembly Resolution 273).

Israel was thus not only a geographical reality in situ, but a legal entity recognized in international law as an equal member of the family of nations. To equate Zionism with racism and racial discrimination was tantamount to claiming that Israel’s raison d’etre was illegitimate. This was not only morally unacceptable but legally incoherent.

Zionism was thus singled out, the same way Jews had been throughout history. That was the way it was seen, not only by Israel and Jews worldwide, but by the United States. As Moynihan, the US Ambassador to the UN said, “The abomination of anti-Semitism has been given international sanction. The General Assembly today grants symbolic amnesty – and more – to the murderers of the six million European Jews.” He went on to stress that “A great evil has been loosed upon the world.” He was expressing the views of many non-Jews all over the world.

The French newspaper L’Aurore went so far as to claimthat “For men of good will the UN has ceased to exist yesterday, at 2.38 GMT.”

Even the British newspaper The Guardian, known for its critical stance towards Israel, declaredthat “many of the countries which provide the automatic majority on these occasions are up to their knees in racial and tribal ambiguities, but without having a democratic apparatus such as Israel’s.”

At the end of the Cold War, the United Nations General Assembly revoked its Zionism equals racism and racial discrimination resolution. On December 16, 1991, it adopted resolution 46/86 revoking resolution 3379 by a majority of 111 to 25 with 13 abstentions. It took sixteen years, and a changed international landscape, for the United Nations to amend its ways.

US President George H.W. Bush introduced the aforementioned resolution, stressing that “to equate Zionism with racism is to reject Israel itself, a member of good standing in the United Nations.” He went on to state the obvious: “This body cannot claim to seek peace and at the same time challenge Israel’s right to exist.”

Zionism is Racism in the Context of Recent Israeli Elections

The call by Benjamin Netanyahu on election day (March 17, 2015) for Likud voters to rush and cast their ballots as Israeli “Arab voters are coming out in droves to the polls” caused much controversy both in Israel and abroad. His words were construed as objectionable if not racist.

To be sure, no serious commentator or politician either in Israel or abroad has argued that Netanyahu’s statement reflected badly on Israel’s democracy or on Zionism. The criticism was usually directed at Netanyahu himself, rather than at Israel, let alone Zionism as an ideology.

Netanyahu has since expressed his regret, saying he never intended to offend the Israeli Arabs. He went on to stress that he saw himself as the prime minister of all Israeli citizens, without distinction as to faith, ethnicity, or gender. Although objectionable, Netanyahu’s words were aimed at encouraging his supporters to hurry up and vote. He apparently had no intention whatsoever to denigrate the Arab minority in Israel. His intentions notwithstanding, the effect of his statement was prejudicial.

Paradoxically, President Barack Obama’s critical reaction to Netanyahu’s statement confirms that the US President entertains a positive image of Israel’s democratic traditions. “We indicated that that kind of rhetoric was contrary to what is best in Israel’s traditions,” he stated. “Israeli democracy has been premised on everybody in the country being treated equally and fairly,” the President went on to say, “And I think that that is what’s best about Israeli democracy.”

In addition, the critical reaction in Israel itself, and the ensuing public debate in the country, regarding Netanyahu’s words belie the notion that Israel as a state is racist or that Zionism is an ideology premised on racist notions. What drew the attention of most critics was actually the fact that such a statement represented an exception to the democratic traditions of Israel.

Further, Netanyahu’s own political credo is founded on the writings of Zeev Jabotinsky, the ideological father of Netanyahu’s Likud Party. Zeev Jabotinsky depicted a future Jewish state comprising a majority of Jews and a substantial minority of Arabs living as equal citizens within a liberal democratic system. He believed that the Arab minority would have to enjoy the same rights as the Jewish majority and be fully integrated into the states’ institutions.

Thus, to contend that Netanyahu’s statement on election day can serve, in any way or form, as a counterargument to those who oppose vehemently the Zionism is Racism Resolution would be factually wrong and intellectually disingenuous.

The Zionism is Racism Resolution adopted by the UN General Assembly forty years ago this year was a corollary of historical circumstances. The Cold War had produced a large coalition of Communist countries, as well as Arab and third world states that could muster a plurality of votes at international organizations against Israel. On this occasion, the resolution clearly and explicitly questioned the legitimacy of Israel by equating Zionism with racism and racial discrimination. However, it would be a mistake to see this as merely a historically-contingent event, for Israel and Zionism have been the focus of a particularly hostile attention at international forums since then, as well.

Thus, although singular in its content and effects, the Zionism is Racism Resolution reflects, in a sense, an ongoing obsession with Israel at the UN to this day. The effect of that is not only detrimental to Israel’s image, but also to the reputation of the UN as a fair and balanced institution. Indeed, one of the main characteristics of a just legal system is its unbiased modus operandi. This was hardly reflected in the Zionism is Racism Resolution. To be sure, the problem entailed in directing so much venom on Israel and everything it represents is that international law might be seen as a prescriptive framework for the conduct of international relations, but not as an actual legal setting meriting respect. The lesson to be derived from the Zionism is Racism Resolution is as pertinent today as it was forty years ago when it was adopted.