The Surprising Story of the First Blood Transfusion

Rod Tanchanco is a physician specializing in Internal Medicine. He writes about events and people in the history of Medicine. His personal blog is at talesinmedicine.com. 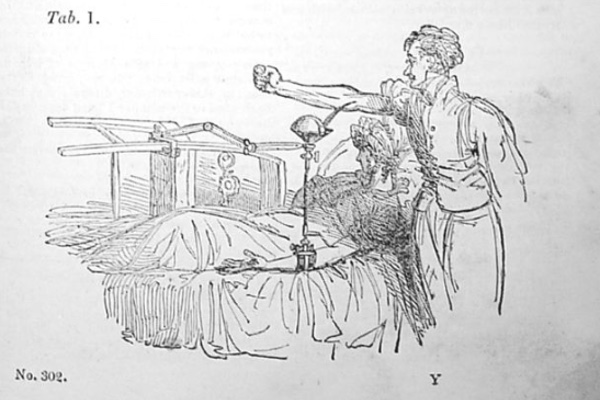 The transfusion of human blood started out as a very personal affair. Blood donors, usually the patient’s relatives or sometimes even their doctors, relinquished blood at the bedside. The blood was then transfused directly from one person to another using a simple syringe or special contraptions.

Early 19th century physicians were unaware of blood types and blood-borne infections. But the life-preserving function of blood was well established, as it had been for millennia. Epileptic Romans drank the blood of bleeding gladiators in hopes of curing seizures.  In 1492, a dying Pope Innocent VI was supposed to have received blood from three sacrificial boys. Blood had been used in rituals and is a symbol of life itself in religions and cultures.

The idea of transfusing blood came after an important premise was discovered: that it actually flows in one direction. It took mankind more than a thousand years to figure this out when William Harvey proved it in 1628, debunking centuries-old teachings by Galen. In 1665, Richard Lower performed the first transfusion between animals. The daring feat of transfusing blood into a human being is attributed to Jean Baptiste Denis who infused lamb's blood into a 15-year old boy in 1667. The boy somehow survived, encouraging Denis to keep going. Inevitably, disaster struck. Denis tried to cure a madman with the blood of a docile calf, but when the patient died, Denis instead became embroiled in a manslaughter trial. He was acquitted and the drama ended with the Edict of Chatelet that banned all transfusions without the approval of the Paris Faculty of Medicine. Similar bans followed in Rome and England, effectively ending transfusion research.

It took almost a hundred years before an obstetrician and surgeon at the Guy Hospital in London re-visited transfusion as a treatment option. James Blundell was called to the home of a woman who was bleeding profusely after childbirth. By the time he arrived, the woman had already lost too much blood and Blundell could not do anything to help her. He believed that she could have been saved if blood were somehow restored. He decided to revive what he called the  “neglected operation” of blood transfusion. But unlike his predecessors who used animal blood, he wanted to use human beings as donors.

His first opportunity involved Mr. Bezier, a man thirty to forty years old, and dying of stomach cancer. He was so thin and weak that at first, Blundell hesitated. He feared that transfusing a terminal case would surely fail, and therefore cast doubt on the value of transfusion. But he felt such pity for the man that he decided to try anyway.

Blundell was a well-respected physician and eloquent lecturer. Before he encountered Bezier, Blundell had completed some transfusion experiments on dogs, and had invented a device to directly transfuse blood from donor to patient. On September 25, 1818, between two and three o'clock in the afternoon, the operation began. On hand to assist him was no less than Dr. Henry James Cholmeley, the senior surgeon and president of the medical society. There were at least eight other men in attendance, not just to witness the event, but to serve as blood donors - a 19th century version of live crowdsourcing.

Blundell's device consisted of a cup to collect the donors' blood, which were drawn into a syringe, and then infused into Bezier's open vein. The transfer of blood from each man to Bezier took two minutes, and the process was repeated ten times over thirty to forty minutes. Bezier received about 12-14 ounces of blood from the multiple donors. At first there was no visible effect. Later that evening, Bezier began to feel better. As Blundell was feeling for Bezier's pulse, an attendant pointed to the patient's nose, which was now flushed. Blundell asked his patient how he felt. “I am better, much better; less fainty,” Bezier replied. Unfortunately, the recovery was short-lived. Two days later, Bezier became delirious and weak. He died fifty-six hours after the transfusion.

The first transfusion that involved a patient who survived was performed in 1825. The recipient was a woman with post-partum hemorrhage, just like the case that had first inspired Blundell. The woman's husband served as the bedside blood donor. Several other successful cases followed. In all instances, family, friends, or doctors provided blood by direct infusions. Blood transfusion, however, remained an operation that doctors rarely performed, and usually only as a last resort. Even Blundell recommended that it be reserved only for the most desperate of cases.

It took almost another hundred years before discoveries in blood typing, blood components, and infectious diseases made blood transfusions safe. Today, the science of blood banking is a sophisticated process that involves appropriate screening and safety measures to prevent harm to donors and recipients of blood products. Blood is typed, tested for communicable diseases, separated into its components, pooled, stored, and distributed under close scrutiny by the FDA. While the risk of transmitting infections is not zero (it never will be), the chances of getting HIV from a transfusion is 1 in 2 million, 1 in 800,000 for hepatitis B, and 1 in 1.6 million for hepatitis C. There are other risks as well: fever, allergic reactions, red cell damage from an immune response (hemolysis), and lung injury. These are often non-life-threatening, typically rare, and treatable if they do occur. Over all, blood transfusion in the 21st century is a very safe procedure.

Some of Blundell's deductions still remain true (both arterial and venous blood are useful); and then there were some that were not quite accurate  (men were better donors since they bled more easily and were less likely to faint). He may have been right about one other thing: he predicted that blood transfusion would benefit mankind a thousand years after his time.