Rachel Rolnick is an intern at the History News Network. 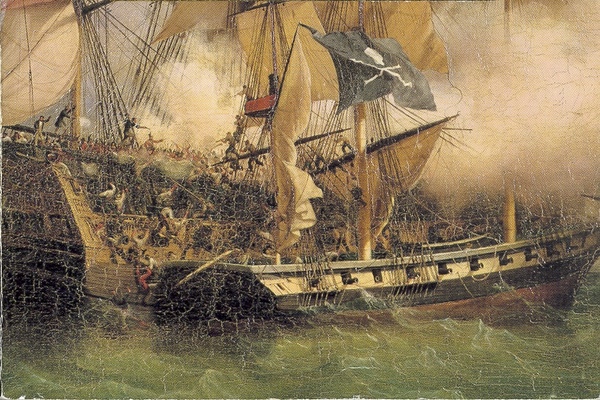 Over time, the myth of the pirate has generated the image of a rugged, foul man with an elaborate hat, an eye patch, and a peg leg. The men of the tales are brutal and unforgiving, forcing captives to walk the plank, and mercilessly plundering ships at sea. What’s lost in this picture? That pirates made a significant contribution to the development of American democracy in the late eighteenth century. Pirate organizations predated any modern democratic government, having originated during the Golden Age of Piracy, from the 1650s to the 1730s. As an outgrowth of a diverse society that sought to maximize efficiency, Pirates formed relatively liberal, egalitarian orders based on elected officials and mutual trust.

Sailors often turned to piracy after long, abusive careers as either naval officers or ordinary seamen. In the eighteenth century, sailors were commonly beaten, overworked, and underpaid, and were often starved or diseased. Aboard ships sponsored by merchant companies, there was often a captain in place, hired by the original absentee owner. He was to ensure that the job was completed and was therefore granted absolute power, leading to a sort of dictatorship aboard ships. By centralizing power in the hands of the captain, ship owners could be sure they were minimizing pirate opportunism. Captains with unlimited and unchecked power were granted the right to punish in especially harsh manners, often leading to dissatisfaction and mutiny. One pirate testified, “Our Captain and his Mate used us Barbarously. We poor Men can’t have Justice done us. There is nothing said to our Commanders, let them never so much abuse us, and use us like Dogs.”

This abuse is what lay behind the pirates desire for a different social order. One historian notes that “the determined reorganization of space and privilege aboard the ship was crucial to the remaking of maritime social relations.”

1. The pirates created an order that allowed them to vote for their captains.

The first rule of one particular pirate code reads, “Every man has a vote in affairs of moment,” securing, at the start, a man’s right to participate in the selection of the captain and other officials. With this right in place, each crew elected a captain who was granted total power only during times of distress. The crew, rather than the captain, maintained the authority to determine where a voyage was headed, and whether to attack a particular ship or village.

2. The crew retained the right to depose their leader if they so chose.

The Pirate Council (the term used to referred to the members of the pirate crew) was responsible for removing officers from their positions, and then choosing new candidates to fill those positions. Pirate crews had the option of deposing any captain they deemed to be abusive or of exceptionally poor judgment. As one Dutch governor pointed out, “Every man has as much say as the captain.” A merchant captain, in utter disbelief of the system, testified, “there is so little Government and Subordination among [pirates], that they are, on Occasion, all Captains, all Leaders.”

3. There was a system of checks and balances.

A significant check on the captain’s power was the quartermaster, who served as a sort of prime minister, or chief of staff, to the captain. The quartermaster was also democratically elected, and held a variety of powers. He was the chief executive trusted with the job of distributing loot, and also served as the primary executor of punishment. He was an intermediary between the pirate crew and the captain. One captain explained, “The captain can undertake nothing which the quartermaster does not approve…. he speaks for and looks after the interest of the crew.” The quartermaster can be likened to a judge as well, as he played a vital role in arbitrating disputes among crew members. The establishment of this position reflected a desire to narrow the gap between captain and crew, as well as to check the power of the captain. The Council had the authority to make all decisions that had the greatest effect on the welfare of the ship, including electing officers. The Council served as a legislative body, and also often doubled as a court

4. They had a health care system.

A common aspect of pirate codes was injury compensation. Each pirate code made provisions for certain injuries and their monetary worth. For example, the loss of a right arm was worth six hundred pieces of eight, while a left arm was worth five hundred pieces of eight. The funds for these types of compensations were taken from a common pool of money, which remained as a portion of the booty captured on their expeditions.

5. Booty was distributed fairly according to skill and duty.

Pirate codes often described methods of payment and distribution of wealth at great length. These rules were necessary to establish a specific economic order and equality, which remained in place even among a band of thieves. Most pirate codes explicitly regulated distribution of plunder. Booty was divided according to skill and duty.The captain and the quartermaster received between one and a half and two shares, and all other positions of name received one and a quarter share each. Regular crew members received one share. This system was radical for its time, having created a payment system that decentralized wealth. It was precisely antithetical to the elaborate pay rank structures common among all other maritime ventures. Pirate historian Marcus Rediker suggests that this might have been “one of the most egalitarian plans for the disposition of resources to be found anywhere in the early eighteenth century.”

Long before the American or French revolutions, pirates were living – more or less –

according to the principles of freedom, liberty, and equality. Pirates, in effect, were pioneers in democracy. They developed a system of checks and balances, created a representative legislative body with certain reserved powers, and provided a common system of healthcare. Perhaps most importantly though, the Pirate Codes were revolutionary in their method of taking power away from any one man, and placing it in the hands of the majority.

Marcus Redkier, Villains of All Nations: Atlantic Pirates in the Golden Age (Boston, 2004).

Peter Linebaugh and Marcus Redkier, The Many-Headed Hydra: Sailors, Slaves, Commoners, and the Hidden History of the Revolutionary Atlantic (Boston, 2000)

David Cordingly, Under the Black Flag: The Romance and Reality of Life Among the Pirates(San Deigo, 1997).

Charles Johnson, A General History of the Pyrates (London, 1724).