The Ruins of Entertainment’s ‘Borscht Belt’ of the 1960s 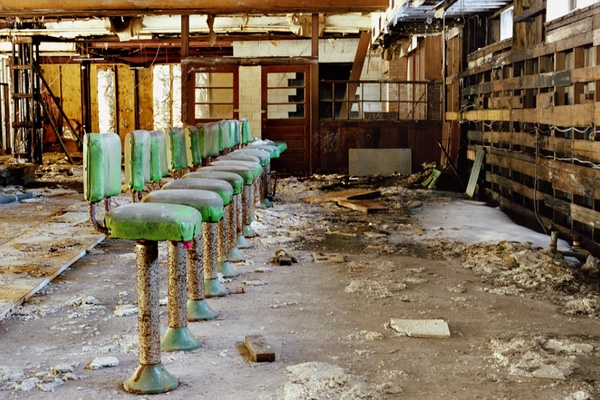 Who can ever forget the ‘Borscht Belt,’ the Catskill mountain hotel night clubs that were famous from the Roaring Twenties to the 1980s? The lush New York hotels were the birthplace and later the homestead of such talented comics as Mel Brooks, Woody Allen, Sid Caesar, Danny Kaye, Alan King, Shecky Greene and Freddie Roman. Jerry Lewis invented routines there and basketball phenom Wilt Chamberlain, all 7’ of him, was a bellboy and hotel basketball team all-star. The movie Dirty Dancing made the resort immortal. Visitors, mostly Jewish, came from all over the New York metropolitan area, less than 100 miles away on route 17, to spend the week or even the summer there (most of the hotels were in Ulster or Sullivan Counties). It was a vacation nirvana, a fantasy off route 17 two hours from the New York City, with the pedal to the metal.

The fabled Catskills resorts, with their fabulous nightclubs, began to die when the jet airplane started carrying vacationers to Florida and the Caribbean in the 1960s. By the late 1980s, it was on life support and by the mid-1990s in the cemetery. The nightclubs and nearly all of the resorts closed, the doors were locked and weeds started to grow as high as the windows.

What no one realized, though, was that they never actually cleaned up the decaying buildings and nightclubs. Some owners had no funds to do so. Others tried to rebuild and ran out of money. Some keep hoping for an area renaissance. Some sold to builders who promised a renovation but did nothing. Some hotels burned down. Some of the old hotels were restored and became health centers, orthodox Jewish colonies and drug rehab centers. They were a minority. Nothing replaced the ones that have decomposed, either. Today, they remain as they were in the ‘90s, rotting, filled with turned over couches and chairs, with drape rods falling from the ceiling and cold squirrels racing down the hallways. Birds have formed colonies there. The famous hotels in the mountains – the Concord, Grossinger’s, the Nevele, Tamarack Lodge, the Pines, Windsor, Gilbert’s, Zeiger’s, Camp Hi-Li -- today look eerily like the ruins of Pompeii.

The ruins of the Catskills, the entertainment world’s decaying treasure chest, have been brought to life in a lengthy series of poignant pictures by photographer Marisa Scheinfeld, whose grandparents met at a Borscht Belt hotel. She has put together an exhibit of several dozen pictures that are housed at the museum of New York’s Yeshiva University, in the heart of midtown Manhattan at 15 W. 16th Street. A walk through the exhibit, open through April, is a walk through entertainment history. You can almost see the ghosts of Sammy Davis Jr. and others in the pictures of the ruins.

“I have lived in the Catskills for 28 years, since I was a kid. I was a lifeguard at the famous Concord pool. I wanted to do this exhibit to show that the whole area today is ruins, just like European ruins of long ago. What happened in the Borscht Belt is an apocalyptic,” said photographer Scheinfeld

The photographs make an evocative tableau and they are big. The pictures are near movie poster size and, in gripping color, leap off the walls of the museum. You see a lot of Borscht Belt memorabilia in a nice wall length exhibit outside the front door to the exhibit room. There you will find old Catskills post cards, hotel tee-shirts, nightclub programs and restaurant menus. There are photos of many of the stars who became famous at the Catskills, or brought their fame with them. such as Sammy Davis Jr., Eddie Cantor, Eddie Fischer and Duke Ellington.

All of them give you a good sense of the Borscht Belt and tug at your emotions. And then you walk into the main hall for the photo exhibit and a shock.

You shudder when you see some of the first photos, especially one of the rundown lobby of The Pines, with a musicians music stand from the orchestra sitting crooked in the middle of it, amid a floor full of junk. There is another picture of a Pines room with pink insulation ragged bags hanging down from the ceiling and hills of insulation covering the floor. There is a single chaise lounge sitting in the middle of a long ago closed pool patio in another. There are other empty pools with their windows gone and walls covered with peoples’ names and graffiti. There is one stark photo of the Laurels indoor pool, covered with snow and the roof gone. Next to it is a splashy, color postcard of the pool in its heyday, full of laughing bathers.

There are two pictures of abandoned hotel night clubs. One is of the stage at The President Hotel, with wild, colorful graffiti decorating the walls and the barren concrete floor where the old orchestra seats used to sit. The cabaret at the Pines is still there in one photo, but with its fancy entry doors all decayed.

There are several photos of hotel guest rooms, mostly without furniture and the walls decaying. There is a riveting photo of a guest room at the Tamarack Lodge. The telephone is lying on the bed, with the receiver next to it, as if someone had just made a call.

“Oh, that one!” Scheinfeld says. “Everybody talks about that one. I did not set that up. I found the phone on the bed and snapped the picture. I did not set up anything; this is all pure, living history.”

The photo of the old Grossinger’s coffee shop is a shocker. All of the stools for the counter are still there, dilapidated, but the entire counter has been snatched way by someone.

People have looted the night clubs, tramped around the pools, covered the walls with graffiti and, in general, made a colossal mess of a long ago entertainment mecca.

“I’ve talked to people who see the exhibit and many of them are Borscht Belt vacationers from the old days. At first, they are shocked, but then, a second later, their eyes light up and they tell me stories of their trips to the Catskills in the old days. They beam,” said the photographer.

She got into all of the abandoned hotels because she is a local resident and knows a lot of people connected to the resorts. An outside photographer probably could never have done the exhibit.

She sees the ruins of the Borscht Belt as the culmination of a long history. “The area was a lumber industry enclave throughout most of the nineteenth century and then the tanning business took over. Jews were barred from just about all U.S. hotels in the 1920s, so hundreds of them came here to start their owner resorts. That’s how the Borscht Belt was started. Now, though, nearly a hundred years later, it is gone. It is a victim of a lot of things, but mainly, I think, as the Bible says, everything has its season, and the season in the Catskills is over.”

She dismisses talk that a new casino planned for the area will allow it to bounce back. “It might help two or three hotels, but that’s it, and recently the casino business has been failing,” she said.

The exhibit at the Yeshiva Museum has some weaknesses. While highly interesting, the exhibit might have been more complete. Many people vacationed in the Catskills and it might have been easy to obtain old home movies of what the resorts and their vacationers looked like when the Borscht Belt was at its peak. There should have been a number of tables, or cases, full of Catskills memorabilia – more postcards, ticket stubs, sports programs, golf course scorecards, tee shirts, golf clubs, nightclub programs. Someone might have taped former Catskills comics talking about what it was like to play the nightclubs in the mountain resorts in the 1950s. People in their audiences might be taped reminiscing what it was like to see the comics, or listen to singers like Sammy Davis Jr.

That would have been a nice ‘before’ section to this sad ‘after’ section.

Even so, the photo exhibit by Scheinfeld is spectacular. Whatever did happen to the Catskills, people ask? This exhibit shows them. If you ever vacationed in the mountains and you see this exhibit, get out the Kleenex.