It's Been Two Years Since Sandy: The Lesson We Missed

Gregory Rosenthal is a doctoral candidate in History at the State University of New York at Stony Brook and an Instructor in Environmental Humanities at the Middlebury School of the Environment. 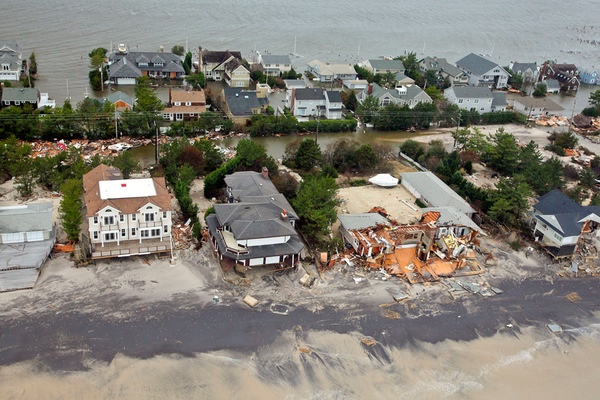 The term “perfect storm” conjures up inevitability. Converging extreme weather conditions lead to certain death and destruction. But in fact, the way a storm interacts with human communities is anything but certain. Hurricane Sandy was an imperfect storm. It's second anniversary is an opportunity to reassess what happened and what went wrong.

After Hurricane Sandy passed through New York in October 2012, our imperfect city was laid bare by the parting clouds and receding waters. The foundations of this disaster had been set long before the storm hit. New York is a city deeply segregated by race and class, where poor and working-class families live on the geographical margins of the metropolis. The most common cause of death during Sandy was drowning, and flooding was most severe in marginal communities. In our segregated city, the poor live outward beyond the edges of reliable transportation and upward into the stratosphere of public housing. These unequal geographies increase the vulnerability of the poor to disasters. The peripheralization of poverty—including over fifty thousand New Yorkers living invisibly in homeless shelters—simply masks the severity of this problem. In the case of Hurricane Sandy, poverty was the disaster; nature was its handmaid.

Some thought that Sandy would be the great equalizer. There were rumors during the storm that several feet of water rose on the floor of the New York Stock Exchange—karmic justice for the victims of the Great Recession and their “underwater” mortgages. But those evicted and dispossessed by foreclosure and those laid off from their jobs were proven wrong when Mayor Michael Bloomberg personally rang the opening bell at the stock exchange to show the world that the survival of global capitalism was paramount above all. Mysteriously, the lights remained on in large office towers downtown while citizens, just a mile north in the Lower East Side, groped around in dark stairwells to check on family and friends. Sandy was not an equalizer.

Having rescued Wall Street, the city, state, and federal government seemingly ignored the crisis brewing in poor and working-class neighborhoods. I spent a few days in Chinatown approximately one week after the storm. As a volunteer, I carried food and water up six-story nineteenth-century tenement buildings and up twenty-story public housing projects. We knocked on doors to see who was in need. We used flashlights like urban spelunkers to find our way through pitch-black hallways. One public housing resident told us that we were the first volunteers they had seen since the storm, even as FEMA trucks amassed on the streets below, out of reach for disabled and elderly residents living without elevators. Over four hundred public housing buildings were damaged by Sandy, with greater than 35,000 units affected. It is here, in these buildings, where the disaster occurred, and where it continued to unfold in the weeks and months ahead.

The recovery—if one word could ever describe such a hodgepodge of actors and efforts—proceeded along unjust and unequal lines. Business owners were given support while workers and families waited for assistance. Meanwhile, residents in the Rockaways pushed through an entire winter without heat. The epicenter of the disaster was nowhere and everywhere. As politicians patted themselves on the back, fatalities continued: a man fell down a slippery apartment stairway in Queens; another was mowed down by a military vehicle along Canal Street. These were excused as accidents, but in reality they were part of the unfolding disaster. Nature, a hurried and mismanaged recovery, and our deeply-rooted inequalities combined to turn a perfect storm into an imperfect, immoral maelstrom.

For a brief moment, class struggle seemed like the only way out. I saw tourists and people with briefcases pushing their way onto overcrowded buses as service workers were left behind, wondering if they could still make it to their jobs. Modern-day Robin Hoods fought to reclaim and redistribute resources from shops and homes. These articulations of a decades-long struggle against hunger and marginality prompted a police response. Strangely, twenty young white people charging their cellphones in a bank lobby was allowed just as similar congregations of hungry and homeless people were dismissed as a threat. Many Sandy survivors joined neighborhood committees and worked with groups such as Occupy Sandy to enact a bottom-up “People's Recovery.” Collectively they showed that a non-hierarchical system of mutual aid can be more effective than state power. But their efforts did not lead to revolution. Poverty and class inequalities remain.

Historians who study natural disasters have shown that these are not so much events as they are processes. Causality (or blame) often lies more with people than with nature. Our capitalist mode of production—so evident in this city where billionaires eat strip steak around the corner from a penniless proletariat—beckons disaster as just another opportunity for accumulation. We must recognize that poverty is the imperfection that made Sandy a “superstorm.” Capitalism is the crisis that we must address before the next one hits.