Have We Really Been Reading the Declaration of Independence Wrong? 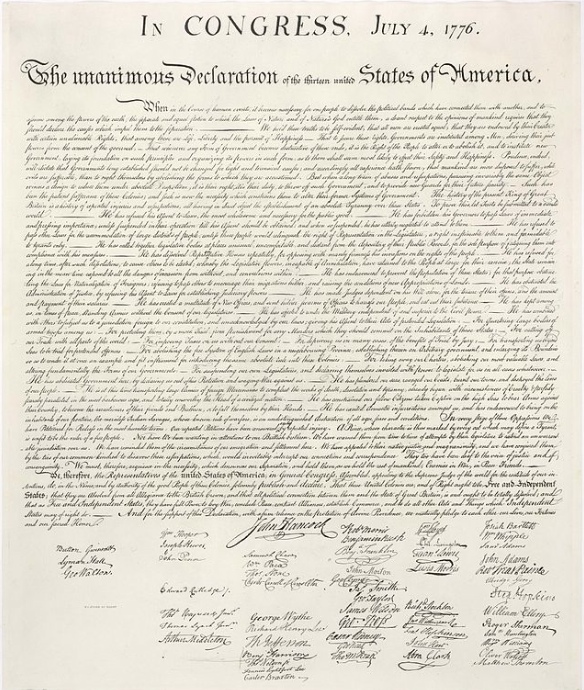 To the delight of newspaper feature writers, just in time for the Fourth of July, a national story popped into the headlines like a little firecracker on July 3. As the New York Times reported, “a scholar is now saying that the official transcript of the document . . . contains a significant error.” According to political scientist Danielle Allen, in the “parchment original” held by the National Archives a period improperly appears following the words, “life, liberty, and the pursuit of happiness.” She contends that the period does not belong there, that it was mistakenly introduced, and that it has produced a “routine but serious misunderstanding” of the Declaration. At least according to news accounts, Allen argues the truths we hold as “self-evident”—that we possess certain natural rights—extend beyond such individual rights to the idea that governments are the means to collectively realize and protect them. But isn’t this already a standard understanding of the text?

More interesting to me here is the popular media kerfuffle about the revolutionary typo, not Professor Allen’s provocative new book itself, Our Declaration: A Reading of the Declaration of Independence in Defense of Equality (New York: Norton/Liveright, 2014).

Allen’s reported revision is a tempest in a teapot. Like fireworks, the controversy (if it is one) is arresting but likely to be ephemeral—percussive but quickly forgotten. It’s a mere “period” piece. And ironically, what seems to make it a big story in the first place is our misunderstanding of the nature and material substance of the Declaration—and our overvaluation of the “original parchment” housed in the National Archives.

My students would be surprised to see me soft peddle errors in grammar or transcription. And I concede readily that periods, commas, and other marks of punctuation matter. They matter, for example, in that other sacred document, the U.S. Constitution. Consider the Second Amendment and the critical work performed by its three commas: “A well regulated Militia, being necessary to the security of a free State, the right of the people to keep and bear Arms, shall not be infringed.” In a long battle over commas, scholars on different sides have argued vigorously that their odd usage in the amendment’s text shows that Americans do or, alternatively, do not have an individual right to own firearms. The decisive victors in this grammar war are those who maintain (unlike a narrow majority of the Supreme Court) that, grammatically, the sentence’s intention and meaning is to protect state militias, not the claims of individual gun owners.

But the history of commas and other punctuation is arcane, especially if we venture back to the 18th century, when the usage of writing marks was erratic and evolving, as writers mimicked speech patterns of the day. In English tradition, punctuation marks were not actually considered part of the statutes that contained them, which meant in turn that courts disregarded them in their legal interpretations. Punctuation was often delegated to scriveners, who copied legal documents idiosyncratically, adding their own distinctive flourishes. Such conventions continued in the early U.S., for example with some versions of the Second Amendment containing as many as four commas and with some states ratifying a version that used only two.

If it’s problematic to interpret the Constitution primarily as a historical grammarian, it’s even stickier to so interpret the Declaration of Independence. Why? Because the Declaration is a fundamentally different document—indeed, one might even say that it was less significant as a written text than as a series of oral performances—less a document than an event. Moreover, the Declaration’s legal work was technically complete once it was issued and upheld by the Revolutionary War, as in a divorce decree. It has no ongoing legal authority. For the Declaration, the declaring was paramount, as a musical performance is more important than its musical score.

For the Continental Congress the “publication” of the Declaration was central. It culminates with the words, “We, therefore, . . . solemnly publish and declare, that these united colonies are, and of right ought to be free and independent states . . . .” Congress used the word publish in the 18th-century sense: to make public—not primarily through print but, rather, through public reading before crowds of Americans who might assent and thus publicly affirm the revolutionary separation from Britain. Without such affirmation, the Revolution itself would have been a nonstarter. The Declaration was thus a public event, a political act that enabled and propelled the Revolution, and therefore meant what the American public construed it to mean as they saluted it, not simply what Thomas Jefferson and others imagined.

Thomas Jefferson himself later deemphasized his original contributions and the significance of his own intentions: “This was the object of the Declaration of Independence. Not to find our new principles, or new arguments, never before thought of, not merely to say things which had never been said before; but to place before mankind the common sense of the subject, in terms so plain and firm as to command their assent, and to justify ourselves in the independent stand we are compelled to take. Neither aiming at originality of principle or sentiment, nor yet copied from any particular and previous writing, it was intended to be an expression of the American mind, and to give to that expression the proper tone and spirit called for by the occasion. All its authority rests then on the harmonizing sentiments of the day, whether expressed in conversations, in letters, printed essays, or in the elementary books of public rights, as Aristotle, Cicero, Locke, Sidney, &c.”1

By the end of July 1776, the Declaration had appeared in some thirty American newspapers and numerous broadsides, and by early August its text had been publicly read in all thirteen colonies, including the southernmost province of Georgia. Note that this “publication”—in text and voice—occurred before the creation of the “parchment original,” the one ornamented with the signature of John Hancock and others and which is now enshrined in the National Archives. This document merely commemorated the more important public event that had preceded it.

Perhaps the most remarkable part of the Declaration’s history is its second life. No longer relevant legally or constitutionally, Americans nonetheless revived the text and remade it into the United States’ mission statement. Re-Declarations claimed and extended the document’s promise of equality for Americans—for women, slaves, working people, and all those disenfranchised—changing not merely the punctuation but the words themselves. Activists at Seneca Falls in 1848, for example, declared “all men and women are created equal.” The most famous re-Declaration might be Lincoln’s Gettysburg Address, which defined the United States fundamentally—as articulated in the Declaration—as “a nation dedicated to the proposition that all men are created equal.”

It’s perhaps ironic but not particularly consequential, then, that a transcriber might have improperly inscribed a period where earlier versions had placed a comma or a space. The Declaration of Independence is worth rereading and rethinking two hundred and thirty-eight years later, and it will continue to live on, transcending its ink and velum, its print and paper, its pixels and paraphrases.