Nicholas Wade's Blurring the Line Between Science and Fantasy

Michael Eisen is a biologist at UC Berkeley and an Investigator of the Howard Hughes Medical Institute. 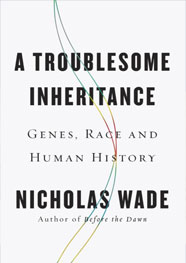 I just finished reading Nicholas Wade’s A Troublesome Inheritance, his latest effort to explain all of his personal racial prejudices in the light of recent human evolution. In this book he sets out to convince readers that many aspects of modern society – the English capacity for industrialization, Jewish intelligence, the inability to establish democratic institutions in the Middle East and Africa – have a strong genetic basis, the result of natural selection acting quickly to enshrine various aspects of culture in a people’s genetic makeup.

As many others have pointed out, the book is riddled with scientific and logical flaws, and the overall impression you get from Wade is not of a science journalist, but an unhinged racist who thinks his views are ok because he’s “telling it like it is”. And it is tempting to simply ignore him. But, unfortunately, I think this book needs to be dealt with seriously, because while this particular work may be dismissible, the line of reasoning it represents is both very dangerous, and here to stay.

The reason that this is issue is bigger than Wade’s book is that, while Wade’s representation of modern genetics is simplistic and selective, and he veers sharply into racist claptrap, the points that he is trying to emphasize about human evolution are, in broad strokes, right. Human genetic diversity does mirror geography, as does much phenotypic diversity. While random drift likely accounts for most of both genetic and phenotypic variation, natural selection clearly has shaped recent human evolution, and there is the potential for cultural forces to impact genetic variation over relatively short timeframes.

The problem is that – for the moment at least – that’s about all we can say. It turns out to be far easier to demonstrate that there has been a fair amount of recent natural selection acting on the human population, than it is to pinpoint specific examples, or to rigorously evaluate specific hypotheses. The reason is that different types of evolution (drift, positive selection, purifying selection) leave different fingerprints in the genome, and we can use these to estimate how prevalent each of these forces has been in human history, and, to a lesser extent, identify regions of the genome that have been subject to certain types of selection.

But the effect of specific examples of selection are almost always weak – especially the kinds of transient selection affecting relatively small groups of people on which Wade hangs his speculation. Furthermore, while natural selection leaves a signal behind in the genome, the signal is primarily that it happened – it’s much more difficult to precisely identify what was being selected, let alone why or how.

Knowing that natural selection has occurred, in some cases recently, but being unable to be more specific leaves a huge void – and it is into this void that Wade has inserted himself. He spends the first half of his book summarizing (albeit it inaccurately and incompletely) a decade of huge advances in human genomics, but then shifts abruptly from science to speculation.

In making the leap from the broad to the specific – from signature of natural selection in the human genome to explanations of the industrial revolution, Jewish Nobel Prizes and political turmoil in Africa and the Middle East – Wade tries to paint himself as a courageous scholar, going places with modern evolutionary biology that scientists WILL not go. But the truth is that scientists don’t go there, not because we are afraid to, but because we CAN’T. The data we have before us simply do not allow us to reconstruct human evolutionary history in this way.

In spending the first half of the book rooted firmly in modern evolutionary genetics, Wade is doing more than just trying to educate his readers. He is trying to give the ideas that he presents in the second half of the book the authority of science. This is crucial to his entire mission. What separates Wade’s theories – in his own mind – from those of a garden variety racist is that they are undergirded by genetics.

Wade weaves a bunch of yarns about how natural selection could have affected some phenotype using the language of modern genetics. But genetics is a science, not a series of fairy tales. Wade ignores the the fact that geneticists have developed a sophisticated set of approaches and tools designed specifically to answer the kind of questions he is raising – approaches and tools that have failed to uncover evidence for the kind of things Wade is trying to convince us must have been true. He can not have it both ways – he can not wear the mantle of a geneticist, but reject its precepts when they are inconvenient.

My concern about this runs deeper than annoyance at someone for failing to use the tools of my trade, or for cleaving to our authority. The scientific method arose as a way to understand the world because the kind of just-so storytelling that Wade is engaging in is useless. Is it a surprise that Wade just happens to find evolutionary explanations for the most pervasive racist attitudes of the day? Of course not. Because unmoored from data and logical rigor, one can make up an evolutionary explanation for anything.

I am an evolutionary biologist. I spend my days studying natural phenomenon and conceiving of possible explanations for why things are the way they are. But, unlike Wade, I know that, without evidence, these stories are bullshit. I could tell you stories all day about how microorganisms have evolved to manipulate the behavior of animals (one of the things my lab studies), but I don’t expect you to take them seriously until I demonstrate that they are true. Wade fails to recognize this. He seems to think that the science described in the first part of his book lends support to his theories. But in fact, it is categorically opposed to it.

This, to me, is the real danger of this work. By using the language of genetics to tell his stories, Wade is trying to obscure the distinction between science and storytelling. He is trying not just to make it ok to voice racist theories about the origins of human phenotypic variation, he is yearning to give them the validity of science. And he has to, because without the imprimatur of genetics, Wade’s stories really are nothing more than rewarmed racist rants.

But I fear that this distinction will be lost on many people. Genetics has a powerful hold on the public – they are fascinated by stories about how there’s a gene for this or that phenotype. And it terrifies me that more people will follow Wade’s lead and use the reality of genetic variation and natural selection in humans to justify to themselves and others whatever it is they want to believe about humanity (see an excellent warning about just this in a 2007 article by Amy Harmon).

This is why it is so important that scientists speak out about not just this book, but all of the related efforts now and in the future to distort science in this way. We are all used to fights with people who overtly reject science – creationists, climate change denialists, anti-vaccine wackaloons and GMO fearmongers. But here we are dealing with someone who is, on the surface at least, CELEBRATING science. But just as we speak out forcefully to explain what science does say (evolution and climate change are real, vaccines and GMOs are safe), we have to be equally forceful in communicating what science can not, or at least does not yet, say.