Wendy Hamand Venet is a professor of history at Georgia State University and the author of "A Changing Wind: Commerce and Conflict in Civil War Atlanta." 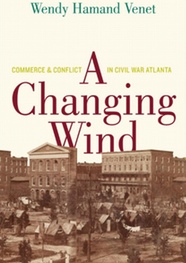 In the spring, summer, and fall of 1861, the Southern Confederacy newspaper ran a series of stories by a woman identified as “Ziola” who dispensed advice to Atlanta women about their proper conduct during the war.  Ziola advocated self-sacrifice and patriotism so that “our Southern Republic” might earn “praise among nations.”  On September 28, 1861, Ziola suggested that women must volunteer to help the soldiers and be prepared to spin and weave their own cloth like their Revolutionary War forebears.  Whether or not Ziola was a real person, the Southern Confederacy used the Ziola character to articulate an important message:  women’s support for the war was vital to Confederate success.  Early in the war, many of Atlanta’s white women heeded Ziola’s advice by sewing flags and uniforms for newly-formed military companies and by volunteering to work in Atlanta’s military hospitals.  Some women did wear dresses made of homespun cloth.  Over time, however, Atlanta’s white women demonstrated growing dissension.  Some women continued to support the cause of Confederate independence, others questioned the war, and some women became so desperately poor that they resorted to acts of lawlessness that threatened local stability.  At the same time, Atlanta’s enslaved African American women looked for opportunities to stretch the boundaries of slavery and to run away.

Early in the war, Martha Winship became Atlanta’s leading proponent of female volunteerism. As founder and head of the Atlanta Hospital Association, she addressed female volunteers like a military officer, telling women “you have enlisted for the war” and admonishing them to cook food, donate money, and spend time nursing men in Confederate hospitals.  Mrs. Winship recruited a significant number of women to work in Atlanta’s twenty-six military hospitals.  In the aftermath of military defeat at Vicksburg, she organized a banquet for Confederate soldiers who had been captured and released to their homes.  She hoped to encourage their return to the army and, equally important, she hoped to boost civilian morale locally.  Winship’s efforts drew one thousand soldiers to the banquet table and also drew the attention of Governor Joseph E. Brown, who gave a speech in which he praised women’s efforts early in the war, then suggested that they had shown a recent proclivity to “permit, if not encourage” their menfolk to avoid military service.

Brown was correct when he suggested that women had become less enthusiastic about war by 1863.   Several months before Winship’s banquet, a dozen women, fed up with high food prices, entered a butcher shop and demanded that the proprietor lower his price of bacon below $1.10 per pound.  When the butcher refused, one of the women brandished a gun and invited her friends to take the bacon. The governor called Georgia’s legislature into session nine days after the incident, announcing “the great question in this revolution is now bread.”  Atlanta’s “bread riot” was the first of many such events in the Confederacy that spring, as poor white women looted stores of food and clothing.  Women, whose support for war was deemed vitally important to Confederate success, were now showing up in the newspapers, not just as seamstresses and hospital volunteers, but as law breakers.

As the war stretched on, lower class white women faced an uphill battle to survive.  The Confederate government stepped up efforts to conscript men, and the absence of male providers coupled with ongoing problems with inflation and shortages, led many women to seek paid employment.  The Confederate government hired seamstresses as “pieceworkers” in Atlanta.  They produced coats, pants, and shirts for $.50 to $1.50 per hand-stitched garment.  However there was never enough work to go around, and Atlanta’s pieceworkers competed with women who took the train into the city daily from nearby communities.  Atlanta’s Confederate Arsenal employed women who earned $.75 to $1.00 per day rolling and sewing cartridge bags.  A growing number of children, ages eleven to fifteen, also entered factory work.  They earned a pittance at the Arsenal, usually $.35 to .55 cents per day.  While family members pooled their resources, prices continued to rise.  By 1864, a bushel of sweet potatoes cost $20 and fabric to make a woman’s dress ran $108.  Not surprisingly, lawlessness became an increasing problem.  Desperate civilians, including women and children, stole vegetables from gardens, chickens from henhouses, food and clothing from local stores.   One frustrated resident wrote a letter to a city newspaper suggesting that high prices injured the cause of Confederate independence as much as did Yankee invaders, “by causing the poorer classes, to a great extent,” to call for “peace upon almost any terms.”

As the Confederacy struggled with military defeat and economic strain, slave women took advantage of wartime conditions to stretch the boundaries of servitude and in some cases to run away.  Advertisements for runaways confirm that women, as well as men, fled from slavery.  Their stories are often lost to history, but some of their names survive, including a woman named Charity who fled from domestic service at the Atlanta Hotel, and Mary Ellen, who fled from the household of one of Atlanta’s wealthiest families.  When the Union army finally arrived in Atlanta to claim the city as a prize, slaves filled the streets to celebrate their liberation.  “Our negro property has all vanished into air,” one owner complained.  A slave named Charlotte cooked one last meal for her owners before leaving, but a slave named Patience departed hastily, and on the way out, she stole enough flour, sugar, and coffee to sustain her for many weeks.

The war led to unprecedented challenges for women in Atlanta.    For slaves including Charity, Mary Ellen, Charlotte, and Patience, the war brought freedom.