Who Were the Plantagenet Kings — And Why Should We Care?

Desmond Seward is the author of The Demon's Brood:  A Plantagent History (2014). 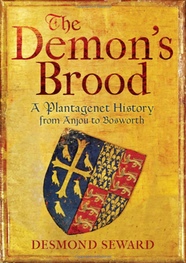 The Plantagenets were the magnificently colourful family of kings who ruled England between 1152 and1485, and ended by destroying themselves in the bloodbath known as the Wars of the Roses. Their odd name means 'broom-plant' (plantagenista), derived from an ancestor's habit of wearing a sprig in his hat as a badge.

But just why, you may ask, should any American care to read about these foreign rulers of long ago? The answer is, of course, that they belong as much to the American heritage as they do to the English. Countless Americans have forebears who came from England, so that there is more English DNA here than any other, including Native American. And these forebears brought a lot of their ancient inheritance with them. Nobody can deny that not only the language of Americans but their law was shaped during the Plantagenet period. Magna Carta from King John's reign is no less of a milestone here in the evolution of human rights than it is in England and a copy is kept at Washington.

Americans certainly care about William Shakespeare, who found the Plantagenets so interesting that he wrote plays about six of them. Ever since he wrote, his ageless tragedies have shaped the way we see the kings. Although a dramatist, his history is often astonishingly accurate, since he took his information from Holinshed's Chronicles, which were based on the contemporary chroniclers

The surest way of bringing these men back to life is through a gallery of pen portraits, describing their personal qualities good or bad, while narrating and examining the main events of their reigns over a tricky people that would not accept bad government. No other family can have had such a violent history. Out of fourteen kings, one was shot by a crossbowman, four were murdered, one was deposed but regained his crown, two came very close to deposition and the last was killed by rebels on the battlefield.

The Plantagenets' forebears were Frenchmen, the Counts of Anjou. Noted for their almost insane ferocity, one of the counts publicly burned alive an unfaithful wife in her wedding dress.The ferocity stuck. The first to rule England was Henry II (1152-89), a genuinely great man, who began the conquest of Ireland and laid the foundations of the Common Law, but who was also responsible for Thomas Becket's murder. He ruled two thirds of France as well, after marrying Eleanor of Aquitaine, the richest, most brilliant woman of her time.

Of their two sons, Richard the Lionheart was a military genius who went on crusade to rescue the Holy Land from Saladin, but the wolfish, half crazy King John lost most of his father's cross-Channel empire and reluctantly granted Magna Carta in 1216. The well meaning but inept Henry III's conflict with Simon de Montfort saw the beginnings of Parliamentary government.

Henry' son Edward I - the terrible 'Hammer of the Scots' - almost conquered Scotland and tamed the Welsh, but his own useless son Edward II was routed by the Scots at Bannockburn, and eventually deposed by his own subjects, who thought that he was a 'changeling'. The magnificent Edward III annihilated the French at Crécy in 1346, but failed to make himself King of France. His effete grandson Richard II, who as a boy king defused the Peasants' Revolt in 1381, became so tyrannical that he was replaced and discreetly murdered by his cousin Henry IV, the first 'Lancastrian'.

Henry V won a shattering victory over the French at Agincourt in 1415 before conquering a third of their country, but he bequeathed an un-winnable war that ended in defeat and bankrupted the English monarchy. The madness of his son, Henry VI resulted in a vicious struggle for the throne between the two branches of the Plantagenet family, York and Lancaster, which engulfed the entire ruling class in a fratricidal slaughter lasting for over thirty years. The Yorkist leader, Edward IV, who replaced Henry, was a handsome, genial, womanising killer - he never lost a battle and ordered the murders of his brother and his brother-in-law as well as that of his Lancastrian predecessor.

When Edward died in 1483 his twelve year old son succeeded him as Edward V, but the boy's uncle, the Duke of Gloucester, seized the throne to become Richard III. The young king and his brother (the 'Princes in the Tower') disappeared, never to be seen again. Horrified, the Yorkist party disintegrated. Many Yorkists joined forces with the remaining Lancastrians, inviting Henry Tudor to take the throne. In 1485 'Henry VII's' army defeated and killed Richard at Bosworth, ending the centuries of Plantagenet rule. (Richard's skeleton has only recently been discovered, beneath a long stay car park at Leicester.)

Men whose ancestors came from Anjou, they ended as the most English of the English, after presiding over the merger of French colonists and Anglo-Saxons into a single nation who spoke the same language. However bloodstained they may have been, they gave England the Common Law. Most important of all, a form of representative, government emerged under their long rule that would one day become the model for democracy throughout the world.

All this may seem dauntingly complex and the list of pen portraits an alarmingly long one. Yet history is the novel that has been lived and, written in the right way, it can be just as entertaining to read as the best fiction – even more, given that its characters really lived and its stories actually happened. Besides being easily accessible, it should offer new perspectives.

With this in mind, The Demon's Brood has been written as a 'Plantagenet primer' designed to give general readers a highly readable, narrative overview of our medieval kings. (If you don't think the book is readable, write and let me know.) Built around the personalities of remarkable men, it offers an unusually simple means of learning about the entire history of the Middle Ages in England.