Grover Cleveland, Lover? Read the Love Letter He Wrote to His 21-Year-Old Bride

by The Shapell Manuscript Foundation

The letter below, written by Grover Cleveland to his fiancé seven months before their marriage, has never before been published. It is being released to the public by the The Shapell Manuscript Foundation. The Foundation is an educational organization dedicated to the collection and research of original manuscripts and historical documents. With its focus on the histories of the United States and the Holy Land, its archive includes letters, documents and manuscripts by Abraham Lincoln, Mark Twain and Albert Einstein, as well as some of the most famous US presidential letters and manuscripts ever written but also, rarely seen. 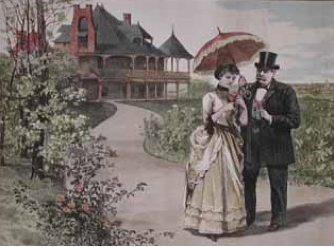 Beauty and the Beast at Oak View, Their Washington Home

Of course it was a huge secret: everyone remembers it. The girl was 21, the President 49; almost no one in the White House had an inkling. In Washington, no one knew a thing - but enough suspected, sooner or later, it was always a possibility: women hadn't exactly been scarce in his background. In fact, running for president, the first time, there was an absolute media riot about his intimacy with a woman to whom he was not wed. Anyone who lived through it, would never forget. But not all presidential intrigues end in scandal, for as this letter from President Cleveland to his half-his-age secret fiancée attests, his led to the altar. 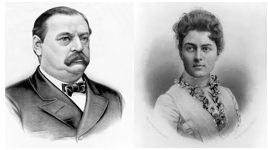 Beauty and the Beast:
President Cleveland Writes a Love Letter to His Young Bride-to-Be

With his huge bulk, walrus moustache and pasty complexion, Cleveland looked an unlikely Lothario; but in love with, and about to be married to, his ward, the beautiful twenty-two year old “Frank”, Cleveland was like any other man - he wanted her to be proud of him, he was proud of her, and he couldn’t wait to live together in their own private world: a tall order, as this letter reveals, for a sitting president.

Here the President writes a love letter, in which he discusses how his Annual Message to Congress would make his bride-to-be proud of her “’old man’”; his unhappiness with Washington socializing and Cabinet wives; the terrible French chef at the White House; their wedding, her role as First Lady and, most poignantly, his desire to live with her away from the White House in “a little house…where the President and his family could live like other people.”  Beginning at the top of the page so that he might pen a long letter - and writing nearly a hour before Sunday dinner on December  13, 1885, Cleveland is nonetheless worried that the Postmaster-General "may drop in any minute" and interrupt him.

...My message went to Congress last Tuesday. Its a pretty long one but if you could see all the papers say about it and hear all the people talk of it,  I honestly think, you would be proud of your "old man"… I had a pretty tough time writing it in the midst of numerous interruptions but it was a relief to get if off my hands. I had to put a table in my bed room to have an opportunity to do anything. And now that Congress is in Session the rush has begun again and I don't have much rest or peace. The Cabinet ladies are beginning to caucus about what they will do and will not do during the coming Session and I suppose we shall not be entirely free from the troubles among the women of the administration which usually infests a "Season" at the seat of government… Ladies always make trouble - that is when there are a lot of them together all bent on the same thing. If I can get one of them all alone, then I am all right. I dread the social part of this thing very much. I think it a regular nuisance and I keep wondering how my Darling will get along with this dreadful, dreadful bother and the constant boring and vexation. I shall give as few State dinners as possible.. I've had a Chef now since the first of November and I often wish I had the old negro woman Carla again...  I have been thinking a good deal lately how nice it would be to have a little house a few miles away and  live there  - Coming into the White House at regular times and having all the official dinners here, but have a place where it should not enter, and where the President and his family could live like other people.

While I love you Frank as dearly as I can, it pleases me very much to read what you write about your improvements and all that. I am glad to believe that you appreciate something that is before you as the wife of the President and Lady of the White House. I guess there never was anyone so young and so unused to such responsibilities, who occupied the place before; and my anxiety is my very darling Child, that you should be as well prepared as it is possible... Of course the more other people admire and praise you the more proud I should be, but I love you just exactly as you are and for just what you are; and that Darling you must never doubt…

…Lizzie [his sister Rose Elizabeth Cleveland]  and I have been walking in the East Room and have talked a good deal about you and the marriage... She thinks it would be wise to have no one at the wedding but relatives… Perhaps they [the Cabinet] could well come after the ceremony. But I'll tell you what I think… we will find some way to get married so that we can't get away from each other very easy… I've warned you "time and time again" and as nearly as I can make out you seemed bound to rush to your fate.

I am glad you contemplate paying a little attention to the science of hen raising - for I don't know what else we can do when we quit here... We must be very frugal and saving because I suppose there is no way for an Ex-President to earn money…..

President Cleveland had initially wanted to be married in a quiet private ceremony, but he believed every bride was entitled to a beautiful wedding, and so, for the first and only time, a serving president married in the White House on June 2, 1886,  in front of a few couple dozen friends, and the Cabinet. The newly-weds did buy a little house in Washington (Oak View),  living in the White House only during “the Season” – December through March – and their own seemingly improbably union, with Cleveland more than twice “Frank’s” age, turned out to be among the happiest in presidential history. Perhaps this was his intent, somehow, after Frank's father - who was his close friend - was killed in an accident and he became the eleven year-old's de facto legal guardian.  When asked, in his long bachelorhood, why he didn't marry, he replied, "I am waiting for my wife to grow up."

Also growing up throughout Frank’s childhood, some might remember, was a boy named, initially, Oscar Folsom Cleveland - the child of a unmarried widow said to have entertained the attentions not only of the bachelor Grover Cleveland, but a circle of his friends, including Frank's father, Oscar Folsom. When Cleveland was running for President in 1884, the press latched on to his rumored paternity of the little boy - giving rise to the infamous campaign chant "Ma, Ma, where's my Pa?" by Cleveland opponents, to which Cleveland supporters replied "Gone to the White House, Ha! Ha! Ha!"  Cleveland, who would enter the White House unmarried -  a distinction shared with only one other president, James Buchanan, who never wed - honorably maintained that yes, indeed, he may have fathered the boy, and had agreed to provide for the child. Of course, some Cleveland supporters maintained the married but rakish Folsom was the father, and that Cleveland,  being single, gracefully accepted paternity so as to leave unharmed  the Folsom family's reputation. 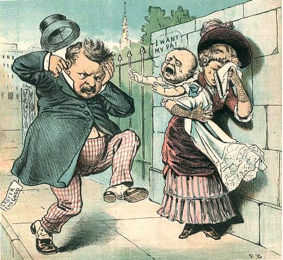 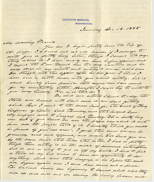 Love letters from Cleveland to Frances Folsom. Credit to the Shapell Manuscript Collection.

Of Special Note: This letter may be seen in the upcoming "America's First Ladies" exhibit at the Herbert Hoover Presidential Library and Museum in Long Branch, Iowa, April 19 - October 26, 2014.

Grover Cleveland's Handwritten Announcement of, and Invitation to,
His White House Marriage