Enough With the State of the Union Already

News at Home
tags: presidents, State of the Union

Scot Faulkner served in the Reagan Administration and as Chief Administrative Officer of the U.S. House of Representatives. http://citizenoversight.blogspot.com/ 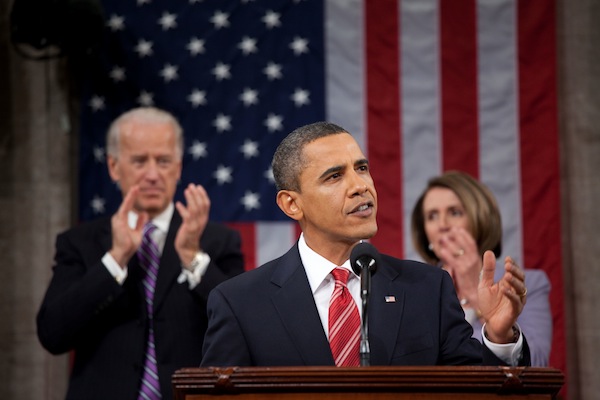 It is time to rethink the State of the Union address.

On January 28, Americans will once again endure the pointless spectacle of yet another State of the Union. The president will enter the chamber like a reigning monarch with all branches of government in polite attendance. Many promises will be made, of which few will be kept. Many cheap applause lines will be given so that everyone in the Chamber, except the Supreme Court justices, will rise in ovation. An array of symbolic guests will be seated next to the First Lady and be used as props at key junctures in the speech.

Whether Republican or Democrat, Presidents use the State of the Union address to annually reboot their agenda. It is a huge waste of time for everyone involved. It creates the visage of an imperial president holding the co-equal branches of government hostage to the vanity of one person. The only people longing for this annual rite are the pundits who get to spend a week speculating on the speech and another week analyzing it. It is the Super Bowl for politicians.  The only difference is the cheerleading occurs afterward in Statuary Hall and the pre-game tailgate parties are held at expensive clubs and restaurants.

Why is there a State of the Union speech?

There is no official reason for the speech.There is not even a requirement for it to be annual. Article II, Section 3 of the U.S. Constitution only requires the president to make a report:

He shall from time to time give to the Congress information of the State of the Union, and recommend to their Consideration such measures as he shall judge necessary and expedient.

It is also not required that Congress grant the president the use of their Chamber for a ritualized infomercial. Both the Senate and the House of Representatives must formally vote on a Joint Resolution to convene a Joint Session of Congress. At any time, one or both Chambers could bring an end to this tedium by simply refusing to approve the resolution.

President George Washington delivered the first State of the Union speech in person before a Joint Session of Congress on January 8, 1790. Since then, there have been 223 opportunities for presidents to deliver their report. Presidents have delivered their report as a speech before a Joint Session of Congress only 98 times. The other 125 times were through written communication.

George Washington and John Adams delivered their State of the Union reports as speeches, but Thomas Jefferson let his written word suffice. For 113 years, no other president delivered a State of the Union speech until Woodrow Wilson on December 2, 1913. President Warren Harding continued this new practice as did Calvin Coolidge, once.

For ten years, Congress did not have to arrange a Joint Session for the State of the Union address. Then Franklin Roosevelt asked for the forum in 1934. In 1946, President Harry Truman opted out of a formal speech because, during the previous nine months, there had been five Joint Sessions of Congress relating to the end of World War II. In 1956, President Eisenhower opted out of a speech because he was still recovering from his September 24, 1955 heart attack.

America seems to have survived the absence of presidential vanity 125 times. Congress still operated. Legislative business continued. The president issues a detailed budget message a few weeks after the speech, which is a far more tangible communication of the administration’s priorities. So why, in the twenty-first century, must we put up with this annual charade, which everyone knows is totally meaningless? A simple reading of the president’s budget executive summary from the Oval Office would more than meet the constitutional requirement. The last memorable line from a State of the Union address was President George W. Bush’s description of an “Axis of Evil” on January 29, 2002. That did not end well.

Since Bush’s 2002 flourish viewership of State of the Union addresses has plummeted. In 2003, 62 million watched. By 2013, only 33.4 million viewed the festivities. Even if you factor in alternative viewing modes offered by digital media, the audience has substantially declined. It seems that most Americans, unlike politicians and pundits, are tuning out this outdated and superficial display of Washington excess. Imagine any State of the Union address without the pomp and pageantry and without countless interruptions for orchestrated applause. The words would be even more empty and meaningless than they are already.