What Really Caused the Reichstag Fire

Benjamin Carter Hett teaches at Hunter College, CUNY, and is the author of Burning the Reichstag: An Investigation into the Third Reich's Enduring Mystery. 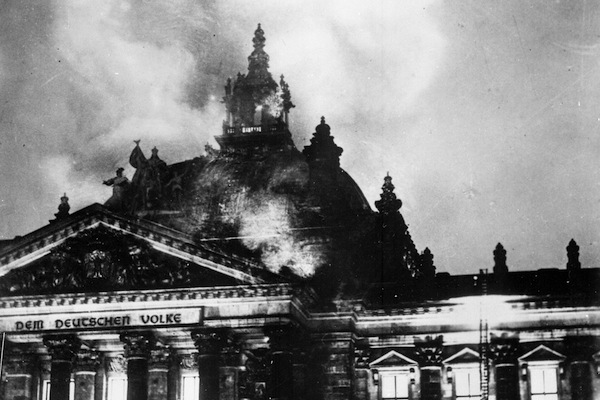 Shortly after nine o'clock on the evening of February 27, 1933, the Reichstag building in Berlin started to burn. By nine thirty a devastating fire was underway in the main plenary chamber. Although Berlin’s fire department was on the scene almost immediately, the chamber could not be saved (although the rest of the building remained almost undamaged). Even as the Reichstag burned, the arrests began: the new “Government of National Concentration” under Adolf Hitler, in office for only four weeks and facing an election in six more days, claimed immediately that the fire was the signal for a Communist uprising and used this pretext to lock away thousands of opponents. On the morning of February 28 Hitler’s government was ready with the legal text that has become known as the “Reichstag Fire Decree” -- an enactment that stripped the Weimar constitution of all individual rights (speech, assembly, freedom from arbitrary arrests, etc.) The distinguished lawyer and political scientist Ernst Fraenkel called the Reichstag Fire Decree the “constitutional charter” of Hitler’s Reich.

The historical importance of the Reichstag fire is thus clear -- but the question of who actually set the fire is much less clear. Not many people in 1933, and no one since 1945, believed the Nazis’ claim that “the Communists” set the fire. One man, a twenty-four-year-old journeyman mason from Holland named Marinus van der Lubbe, was arrested inside the building. Van der Lubbe claimed from the moment of his arrest until his execution by guillotine in January 1934 that he had set the fire alone. But he was 80 percent blind and, at his trial in the fall of 1933, appeared to be mentally handicapped, and so few people saw him as a plausible culprit. Most people who were free to think for themselves in 1933 – for instance, all of the foreign correspondents at van der Lubbe’s trial -- believed in a third possibility: the fire in the Reichstag had been a Nazi conspiracy, with van der Lubbe playing the role of a dupe to direct suspicion toward the Communists (until 1931 he had been a member of the Dutch Communist Party).

Yet after the Second World War, the affair gradually become more and more controversial and interpretations changed. Since about the middle of the 1960s most historians of Nazi Germany, and almost all of the most influential (Hans Mommsen chief among them), have come to accept that van der Lubbe was telling the truth: he acted entirely alone in setting the fire, while the Nazis knew nothing about the fire before it happened and improvised brilliantly when it did.

Yet the controversy has continued, and indeed revived in recent years. The end of the Cold War and other factors have made available a vast trove of documents which were unavailable to researchers before the 1990s. It is therefore possible now to reach some new conclusions, not only about what happened on that cold February night in Berlin, but on the politics, pressures, and prejudices that drove the writing of history in Germany in the years after the Second World War. These points are dealt with in depth in my new book, Burning the Reichstag: An Investigation into the Last Mystery of Hitler’s Reich (Oxford University Press, 2014).

At the heart of the story is a small group of Gestapo (Nazi secret police) officers who investigated the fire in 1933, and then provided historians with information about it after 1945. Most prominent among them was the first chief of the Gestapo, the young Rudolf Diels. Around Diels were the detectives Walter Zirpins and Helmut Heisig, who were the first to interrogate van der Lubbe on the night of the fire (Heisig was subsequently the officer in charge of the investigations); Rudolf Braschwitz, Heisig’s deputy; and Heinrich Schnitzler, who was not involved in the investigations but who held the post of chief administrator of the Gestapo. If one believed what these men said after the war -- and most historians have believed it -- they all concluded from the beginning that van der Lubbe had acted completely alone, and bravely insisted on this point to Nazi leaders like Herman Göring, bringing Nazi rage and even retribution on their own heads.

The problem is, documents from the investigations (which during the Cold War were housed in the USSR and then in East Germany, and only became freely available to researchers in the 1990s) completely contradict this picture of brave cops telling truth to power. In fact Diels’s officers worked hard to track down and arrest Communists in connection with the fire, even fabricating evidence against them and suborning perjury; Diels himself complained to the chief prosecutor that the prosecutor had not indicted all the suspects Diels’s officers had produced.

Why then would these officers tell a different story after 1945? The answer lies in what they did during the war and the legal jeopardy the faced after it. Walter Zirpins went on to run the criminal police in Lodz and the Lodz Ghetto; Helmut Heisig, as Gestapo chief in Würzburg, deported Jews to the camps; Rudolf Braschwitz was involved in “anti-partisan” warfare on the Eastern Front, which, as many recent historians have shown, was tantamount to the commission of mass atrocities against civilians. These men faced various, often long-running war crimes investigations and prosecutions over many years from the 1940s to the 1960s; and with the addition of Diels and Schnitzler they all faced de-Nazification cases into the early 1950s. Heisig, Braschwitz, and (to an extent) Diels also faced investigations specifically regarding their conduct of the Reichstag fire investigations. Therefore, starting about 1947, these men began to collaborate on a version of history in which they had bravely opposed Nazi crimes, rather than participating in them -- a story that was nothing but a desperate legal defense and public relations strategy.

And why did historians believe them? For historians this may be the most important part of the story. Part of the answer lies in a broader dynamic of postwar German history writing: that mainstream German historians were much more willing to accept accounts from (obviously non-Jewish) Nazi perpetrators than they were from Jewish or Communist Nazi victims. But there was a more specific element in the Reichstag fire case. A senior official in one of Germany’s domestic intelligence services named Fritz Tobias, who had close personal and professional ties to several of these former Gestapo officers, adopted their story and incorporated it into a 1959 series of articles on the fire for the influential German news magazine Der Spiegel, and then in a weighty 1962 book, The Reichstag Fire: Legend and Realty. Remarkably, Tobias was able and willing to use his power as an intelligence official to get information unavailable to ordinary mortals and to threaten, intimidate, and even blackmail historians who disagreed with his views. His most important achievement in this connection was to blackmail the director of the influential Institute for Contemporary History in Munich with records of this director’s Nazi past, so that the Institute backed Tobias’s position and assigned the gifted young historians Hans Mommsen to publish an endorsement of Tobias’s views in the Institute’s own journal. The rest is, so to speak, history, and most historians to this day hold to the position that van der Lubbe was a sole culprit -- even though scientific evidence about the course of the fire has shown again and again that one person could not have set the devastating fire in the Reichstag’s plenary chamber, and plausible circumstantial evidence points to a small group of Berlin SA men as the real culprits.