The Problem with "Extraterritoriality"

Alan McPherson is a professor of international and area studies at the University of Oklahoma and the author of the forthcoming The Invaded: How Latin Americans and their Allies Fought and Ended U.S. Occupations. 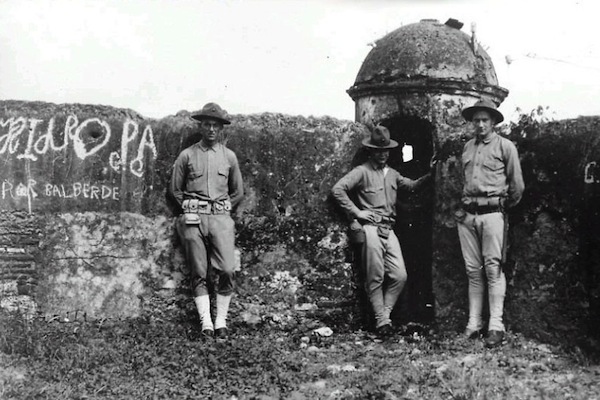 U.S. Marines in the Dominican Republic in the early twentieth century. Image via the University of Alabama.

Recently, Secretary of State John Kerry spoke of the recent security deal reached with Afghan President Hamid Karzai days before that would allow U.S. troops to remain in the country after 2014. Kerry commented on the condition that the Loya Jirga, or council of public and tribal elders, wished to impose on the agreement to the effect that U.S. troops in Afghanistan should be stripped of their long-held immunity from prosecution by Afghan courts.

“Needless to say, we are adamant it has to be the United States of America” that retains jurisdiction over its soldiers, said Kerry. “That’s the way it is everywhere else in the world. And they have a choice: Either that’s the way it is or there won’t be any forces there of any kind.”

To many in Afghanistan, that’s probably an dilemma they can live with. Local Afghan leaders, notoriously difficult for Westerners to read or predict, are either wishing to gain greater control over U.S. troops in their area or else are ready to see them go altogether even if it means less security for them.

The presence of U.S. troops who enjoy extraterritoriality -- the right of soldiers to be judged by their own while abroad -- has long been a double-edged sword for those living in the vicinity. Troops brought security from insurgents but insecurity because of their own behavior.

At least it was so in U.S. occupations in Latin America in the early twentieth century. Wherever they intervened with the assumption that they were spreading civilization to lesser nations, U.S. troops realized that they were surrounded by hostiles -- some insurgents, but often just ordinary people fed up with the physical abuse, drunkenness, and sexual aggression of far too many Marines. Those folk would occasionally strike back, landing them in provost courts staffed and run by U.S. military personnel.

In those courts, immunity for U.S. forces was all but assured. To be sure, provost courts helped protect Marines, kept the most flagrant abusers in check, and treated natives well enough. But their reach during occupations was dramatic. In Haiti and the Dominican Republic during World War I, military courts operated under martial law. In 1931 the Marines also declared martial law in northern Nicaragua. During the Dominican occupation alone, provost courts tried over 3,500 prisoners.

Traditional military courts involved military personnel only. But U.S. occupation authorities used them for any case in which a marine could be involved, thus subjecting civilians to them. Provost courts even threatened the jurisdiction of native courts: Latin Americans acquitted by their own courts could expect to be soon hauled before a U.S. judge. Marines also dragged political dissenters into their courts, including those who defied censorship laws.

The provost courts were self-protective mechanisms ruled by the esprit de corps of the Marines. Marines regularly failed to investigate unless the evidence brought them was overwhelming, and they usually found in favor of their own even when it was. They lied for each other and gave fellow Marines light sentences. The State Department admitted that several cases against Marines were probably “not proven” simply because witnesses were afraid to testify.

To Latin Americans, judgments against their own seemed pre-determined and cruel. For having on him a ration worth 37 cents, for example, one man was confined for a month. Six other men got three months and an $18 fine each for harboring a ham valued at $2.56.

Racism also informed the injustice of provost courts. Typically, Marines believed their own white witnesses rather than dark-skinned natives, who they assumed were uninformed or mendacious.

Much of this malpractice was due to poor resources -- lacking in Afghanistan today as they did in Latin America a century ago. Provost judges or marshals were captains or lieutenants who spoke no Spanish and had no special training. Others were non-commissioned officers elevated to officers in the constabulary, with no administrative experience whatever. Provost “courts” usually consisted of a single person who heard cases and rendered judgments often without even a stenographer.

As a result of this ginned-up system, provost courts abused their power. Their judges fined natives for laws that were unpublished. Others suspended habeas corpus. An investigator in the Dominican Republic concluded that “the provost courts have gained the reputation of being unjust, oppressive and cruel, and seem to delight in excessive sentences. These provost courts, with their arbitrary and overbearing methods, their refusal to permit accused persons to be defended by counsel, and their foreign judges, foreign language and foreign procedure, are galling to the Dominicans, who regard them with aversion and terror.”

In Afghanistan, terror would be the ultimate irony of courts established to bring peace and justice to a country that helped launch terror attacks on the United States. In 2012 Afghan lawmakers expressed outrage when a U.S. sergeant accused of killing sixteen civilians was quickly flown out of the country, denying Afghanistan a public trial. Perhaps the hesitations expressed by the Loya Jirga should lead to U.S. investigations of the potential abuses of extraterritoriality, a legal oddity that continues to be, regardless of its universality, a relic of empire.