Where's that Simon and Schuster Edition of "The Jefferson Lies" David Barton's Been Promising?

Chris Rodda is the Senior Research Director for the Military Religious Freedom Foundation (MRFF), and the author of Liars For Jesus: The Religious Right's Alternate Version of American History. 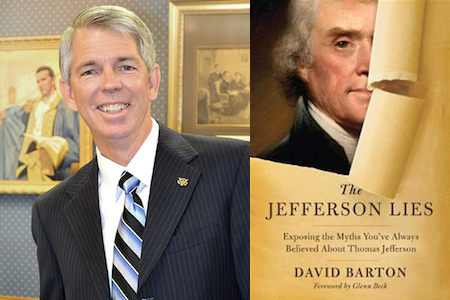 Exactly one year ago today, on August 9, 2012, Christian publisher Thomas Nelson took the virtually unprecedented action of pulling one of its books from publication due to the book's many inaccuracies. That book, of course, was David Barton's The Jefferson Lies.

There were several factors that presumably contributed to Thomas Nelson's decision to take the drastic action of pulling Barton's book from the shelves. One of these factors was that the criticism of The Jefferson Lies was coming from a different source than the usual Barton critics. Shortly after the book was released, Warren Throckmorton and Michael Coulter, both professors at a Christian college, published a rebuttal of Barton's book titled Getting Jefferson Right. Throckmorton and Coulter's book contained little new material, with most of the lies it debunked having previously been debunked by both myself and others, but there was one big difference. Throckmorton and Coulter are evangelical Christians. So is John Fea, an associate professor of history and department chair at Messiah College, who also heavily criticized Barton's book. The criticism coming from Christian as well as secularist writers made it difficult for anyone to use the usual excuse that Barton's critics are just a bunch of anti-Christian secularists trying to obliterate the "truth" about America's Christian history.

Another contributing factor was likely the widely publicized reader poll conducted the History News Network in July 2012 to find the "least credible history book in print." The winner of this dubious distinction was, of course, Barton's The Jefferson Lies.

But, if the timing of events is any indicator, the straw that seems to have broken Thomas Nelson's back seems to have been the threatened boycott of their company by a coalition of Christian ministers in Ohio. The criticism by Throckmorton, Coulter, and Fea had come in May, the month after The Jefferson Lies was published. The HNN poll had made news in July. But Thomas Nelson continued to sell Barton's book. Then, on August 1, a group of Ohio pastors held a press conference at Cincinnati’s New Jerusalem Baptist Church threatening to boycott Thomas Nelson over the book's whitewashing of the issue of Thomas Jefferson and slavery. (Among other things, Barton's book glosses over Jefferson's racism and ownership of slaves, claiming that although Jefferson owned hundreds of slaves, he was really an advocate for civil rights who was not a racist and considered blacks to be completely equal to whites.)

On August 1, these Ohio pastors, who had read an advance copy of the book and had unsuccessfully asked to meet with Thomas Nelson before it released, held a press conference announcing their boycott. Eight days later, on August 9, Thomas Nelson pulled The Jefferson Lies, having suddenly "lost confidence in the book's details."

In his scramble to save face with his followers, Barton quickly responded to his book being pulled with all sorts of excuses: It was because Thomas Nelson had succumbed to political pressure and abandoned its principles; it was because secular publisher HarperCollins had bought Thomas Nelson; it was because Thomas Nelson had edited 20,000 crucial words out of his original manuscript that would clear up everything. it was anything except the fact that his book full of inaccurate history and lies. And his followers bought it hook, line, and sinker. It's now a year later, and Barton is just as popular, if not more popular, as he was before his book was pulled.

Is this claim true? Is Simon & Schuster really going to republish a book that was dumped by another major publisher because of its inaccuracy? That doesn't seem very likely, does it? So what would lead Barton to think he could get away with making such a claim?

As anyone who keeps up with Barton's shenanigans knows, in 2010 Beck and Barton became joined at the hip, with Barton becoming Beck's resident historian, making numerous appearances on Beck's old Fox News show and becoming the history "professor" at the online pseudo-educational institution, Beck University. (For those who aren't familiar with the Beck-Barton partnership, there is a series of videos and links to the pieces I wrote accompanying those videos on the homepage of my website.)

The Beck-Barton partnership didn't end when Beck's show on Fox was cancelled. Barton continued to appear regularly on Beck's online GBTV show, which, by the way, has now been expanded into an entire TV channel called The Blaze, which is not only available online but recently became a regular cable TV channel. Yes, Beck not only has a TV show again; he has a whole TV channel.

So, I hereby challenge Mr. Barton to answer the question: Where is that Simon & Schuster edition of The Jefferson Lies that you've been promising?