Vicente L. Rafael is professor of history at the University of Washington. 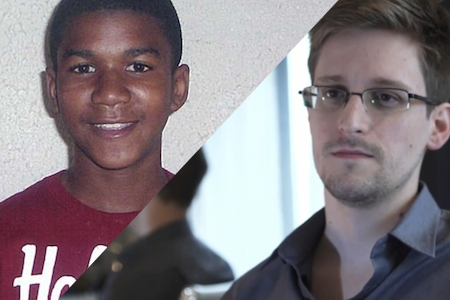 Trayvon Martin and Edward Snowden: two different stories, involving two different men, one white, the other black, unfolding in what seems like entirely separate spheres, one transnational, the other highly local. Yet, both have reverberated around the world as much as they have shaken the American nation, seeping into very fabric of everyday conversations. Their stories brush against each other, creating sparks that flash and reveal certain patterns, only to dissipate into the ether. Is it possible to catch a glimpse of some of these sparks before they disappear?

One recurring thread in Martin’s and Snowden’s stories is the relationship between surveillance and secrecy. It is obvious in the latter’s case. Snowden has confirmed what many have suspected. His story revolves around a scandal: the revelation of a government surveillance program gone wild. Waging permanent war requires ever more information on every single individual. The need for infinite intelligence means that all of us are rendered suspect, guilty until proven innocent.

But the revelation that we, who ever we are, are under surveillance is not the real scandal. Like many other states in history, the U.S. state has sought to keep tabs on its citizens through such measures as taxation, policing, census surveys, social security numbers, birth certificates, and the like. What is of course different is the unprecedented and technologically sophisticated ways by which the state has managed to penetrate, literally and figuratively, into our lives. The effect has been to erode the already frayed boundary between the public and the private. Indeed, the uproar over the government’s surveillance program has less to do with the fact that we are all being watched. Rather, it has to do with the fear that we have lost our right to privacy. We can no longer keep secrets from the intrusions of a force external to ourselves. Instead, it is precisely that force, summed up as “the State,” that now claims the sole monopoly on the right to secrecy. It is this loss of control over keeping secrets -- and hence, the right to hold back parts of ourselves from indiscriminate uses by others -- that is the real source of dismay. To be seen as wholly transparent, our inner lives reduced to a cluster of algorithms and codes: that is the true scandal. At stake, then, in the loss of the right to secrecy is the right to lie: to prevaricate, to invent other worlds, to seek refuge in fictions that assuage and inspire, that prophecy futures, utopic or dystopic, yet to come.

It is this loss that’s revealed in the fate of Edward Snowden. He has shown the extent to which the national security state has colonized the life worlds of the very people it seeks to represent, blurring the lines that separate American citizens from their putative enemies. Both are interpolated by the demands of “national security.” This colonizing power is most dramatically manifested to the rest of the world by the surge of drone warfare. Unmanned, impersonal, faceless machines that hover indefinitely across all borders, drones respect neither the distance nor the variety of human lives below. They embody the disembodied power of the American empire to deal death in and through its unlimited and unwarranted capacity to collect information. Penetrating into the walls and bodies of the population below, drones bring about the destruction of any sense of secrecy. They violently deprive humans of the capacity of keep things for themselves, to hide them away and hold them in reserve for the future. This is the essence of the drones’ power: they are weapons of mass uncertainty. They spread terror by promising to deliver death, but withhold the exact time and the proper place for such a delivery. For those below, such machines come to hold the secret of their death. Drones thus lend to American imperialism an awesome apocalyptic quality.

The destructive effect of drone warfare on secrecy and their human agents allows us to link the story of Edward Snowden to Trayvon Martin. The scholar-activist Vijay Prashad has perceptively compared Trayvon’s killer, George Zimmerman, to a drone. As a neighborhood watchman, Zimmerman was constantly looking for targets. He obsessively gathered information on the “suspicious” actions of those who he thought were real or potential enemies: young black men. Rather than a lone wolf, he was in constant contact with the police. Zimmerman clearly saw himself as an agent of the state, reporting to authorities and seeking their aid to accomplish his mission. Seeing Trayvon walking home, he zeroed in on him. Like a drone, he locked on his target after determining that Trayvon fit the profile of the enemy. Zimmerman’s suspicions were further aroused by the fact that Trayvon was wearing a hoodie, hiding his head and face, keeping it from getting wet in the rain, but also from being seen. Inflamed by Trayvon’s claim to privacy, beginning with the right to do as he wanted with his body -- a right historically denied to black people in the history of African slavery in the U.S. -- Zimmerman went into action, chasing him down, shooting him dead. Like a drone, Zimmerman hovered, gathered intel, relayed it to state authorities. Programmed to act, he targeted the enemy and accomplished his mission. Investigating the scene of the crime, the police later concluded that no crime had been committed, that Zimmerman was within his rights to stand his ground and defend himself. Accordingly, they set him free. Only after pressure from civil rights organizations did Florida’s prosecutor arrest him. But instead, it was Trayvon who ended up being put on trial. Defined by Zimmerman’s defense as a public enemy, Trayvon was guilty of his own death. Zimmerman was deemed to be acting within the law that allowed for self-defense.

Standing his ground, Zimmerman was enacting a version of the doctrine of pre-emptive war central to the so-called “global war on terror.” After gathering information on what appeared to be a potential threat, he acted, doing what he had to do just like a drone. Drones dispense death indiscriminately even as their operators claim to take care in differentiating the guilty from the innocent. Zimmerman, backed by the legal apparatus of Florida, ended the life of an innocent human being even as he claimed to be acting ethically. He was simply saving his neighborhood from possible criminal attacks. Murder in both cases is authorized and made necessary in the name of national security in one case, and white safety in another. Both, too, determined their targets by first racially profiling them: radical Muslims in one case, young black men in hoodies in another. Finally, both took exception to the right of secrecy of their so-called enemies. Assuming to know exactly who they were and what they were up to, drones and Zimmerman render their targets transparent, zeroing in on them to reduce them to zeros.

A final observation: while Trayvon is dead, Snowden is very much alive. Martyred, the former has spurred renewed calls for racial justice, echoed even by President Obama. We can understand this demand for racial justice (and the end to the continuing hold of white supremacy) as, among other things, the call to recognize black people as full citizens of the US. That fullness, in turn, requires that that they have the same rights to privacy: to holding private property, for example, instead of being treated as someone else’s. It is a right that is co-extensive with the right to secrecy and thus to a future other than that scripted by those in power.

For Snowden, it is a somewhat different but, I think, related matter. He has brought forth less the question of surveillance as the right of citizens to know the secrets of their government. Does the government have the right to monopolize secrecy? Can it expect everyone, citizens and non-citizens alike, to be fully searchable without itself submitting to searches? Should it be allowed to occupy our inner lives in the same way it occupies the futures of those it subjects to drone warfare? In broaching these questions, Snowden has been cast as a traitor. He’s become an outlaw, stripped of his citizenship, unable to travel and thus virtually immobilized. In US history, those who have been cast in a similar position—of betraying the secrets of those in power, of seeking to escape their captivity, of becoming fugitives whose return is imperiously demanded by those who claim ownership over their lives—have of course been slaves. As anti-citizens, slaves defined the very limits of freedom, whitening its inner region while blackening its outer extremes. Could we say that the official and media discourses around Snowden draw on this long tradition of racializing citizenship: of casting him as a fugitive from the law which has traditionally guaranteed white safety and security over those of non-white others? Could we say that within the particular imperial and racial nexus we find ourselves in, that Snowden, despite his obvious differences from Trayvon, might also share his fate?