If Only Trayvon Had Freedom Papers

Stephanie Jones-Rogers is assistant professor of U.S. women's history at the University of Iowa, and holds joint appointments in the departments of history and gender, women's and sexuality studies. 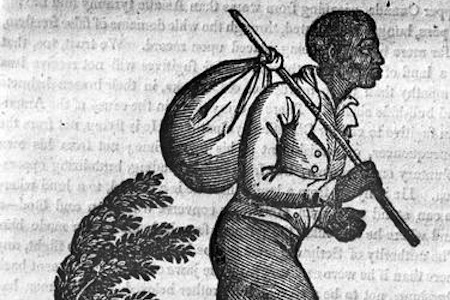 Not guilty. George Zimmerman saw a young black man in his neighborhood, declared him in violation of traversing space where he did not belong, hunted him down, and shot him dead. On Saturday, a Florida jury found George Zimmerman not guilty of second-degree murder. We do not know all of the particulars of that night, but we do know those few things. And when many of us learned about the verdict on the evening of July 13, 2013 or the morning after, we were devastated by the outcome. How could this be?

The simplest answer to this question is that George Zimmerman was brought before a jury of his peers and they found him not guilty. But as a historian of slavery, I thought more deeply about the historical context surrounding and preceding this case, and I came to realize that people of African and European descent have engaged in Trayvon Martin/George Zimmerman-esque encounters since the colonial period, with similar outcomes. Before there was a Sanford, Florida or a Retreat View Circle, there were many Trayvon Martins and George Zimmermans.

In the latter decades of the seventeenth century, British settlers decided to implement a system of racial slavery in North America, and they very quickly developed bodies of laws which restricted and criminalized black mobility and autonomy. Through these laws, blackness became synonymous with enslavement, and the movement and activities of black people were severely curtailed; everything from the right to bear arms to property ownership were limited and outright banned. This fledgling legal system also relied upon all white colonists to police and survey black bodies. They were the eyes and ears of the law, and the courts gave them great latitude in assessing where black people’s bodies could and could not be at any given time.

As the legal system became more sophisticated, the courts required people of African descent to carry documents which validated their rights to be in certain spaces -- and their ability to traverse them, too. Enslaved people carried pieces of paper called slave passes, documents written by their owners, which indicated their destination, time of departure, arrival and return, and sometimes the purpose of their journey. The legal system also required free people of African descent to carry “freedom papers” at all times, documents issued by the court to validate their free status and hence delineate the spaces and places where they could rightfully be and go. Any white person, regardless of their legal authority, could demand to see these documents and interrogate a person of African descent at any time, without any justifiable cause. And if the black person in question could not produce such documents, they could be arrested, beaten, maimed or even murdered. Even if they could, white citizens could assault them with virtual impunity. Enslaved people who were able to secure their freedom were often banished from the states of their birth, forced to leave all that they knew and loved behind.

In the minds of many white Southerners, free and freely moving black people posed a threat to the system of slavery, and thus, they must be removed from spaces marked by black bondage. Black people, free and enslaved, lived in and navigated lands and territories that were perpetually marked as precarious space, and they could lose their lives for doing so.

A more formal arm of this system of surveillance existed, too. Towns and communities hired groups of white men, everyday citizens, to “patrol” Southern space. Patrollers had the power to control and police black movement in any way they saw fit, with the sanctioning of the judicial system behind their actions, no matter how brutal they might be. Black people lived in constant fear of the men they called “paddyrollers,” so much so that they wrote songs filled with cautionary tales about what would happen to the black people they caught in spaces where they didn’t belong.

These systems of surveillance disproportionately affected men of African descent. Although enslaved women were not spared from this kind of policing, enslaved men experienced it far more. The kinds of labor slave owners required men to perform typically afforded them more opportunities to move beyond the landscapes of plantation estates, and as a consequence of this, black men faced more intense scrutiny of their movements. Black male bodies moving through free Southern space have been suspicious and questionable, in a way that black females bodies have not, since at least the seventeenth century. While much of this had to do with slavery, this was also true after freedom came to the South.

Although legally free, African Americans soon learned that white Southerners would continue to police and constrain their freedom, and that process often materialized in the restrictions placed upon their movement across spaces. During Reconstruction, newly erected “Black Codes” not only sought to maintain a cheap, servile labor force throughout the South, they also criminalized black movement and efforts to create economic independence and autonomous African-American communities. Freed blacks that embarked upon long journeys to find lost loved ones found themselves arrested for vagrancy. Others who quit working for exploitative former slave owners in hopes of moving on to more favorable employment were unable to find work elsewhere because their employers had spread word among white neighbors that they should not be hired. And when they did not find work fast enough, they too were arrested under the Black Codes.

Those who engaged in subsistence agriculture and refused to work endlessly the way they did during slavery were arrested and subjected to these laws too. After arrest, they were fined exorbitant jail fees, and when they could not pay them, Southern courts and jailors literally sold their labor to white landowners who forced them to work as though they were slaves again. Over time, this kind of law and order metamorphosed into its most extreme and horrific manifestation; white Southerners’ extra-legal violence against and lynching of African-Americans throughout the twentieth century. Freed people were not moving through Southern spaces in the ways that white Southerners wanted them to and for this they paid a steep and often brutal price.

This is the legacy that we must consider as we reckon with George Zimmerman’s decision to kill Trayvon Martin on February 26, 2012, and as we grapple with his acquittal. This is the fertile ground that cultivated his ideas about black male bodies. This is part of the reason why black males are suspicious and criminal to him. This is why he could imagine them being “up to something” simply because they were moving through space. This is the impetus which drove his sense of justness in racially profiling them, and reporting their movements to law enforcement multiple times over the course of six years. This is what underlay his decision to identify Trayvon Martin as a threat to white safety, hunt him down and shoot him dead.

This is also why some people can reflect upon Trayvon Martin’s alleged behavior that night and see him as the one at fault. “He should have just gone home.” “He should have told George Zimmerman what he was doing there.” “He shouldn’t have been outside in the first place.” “He should’ve known better.”

On the night of Trayvon Martin’s death, George Zimmerman was doing what many Southern whites have done for centuries. He was Retreat View Circle’s “paddyroller.” Armed with a Keltec nine-millimeter handgun concealed in a holster attached to his waistband, George Zimmerman patrolled his community, and stalked a young black man who he believed had no right to be there. Trayvon Martin seemed out of place, and Zimmerman was going to find out where he belonged. When Trayvon Martin did not present his “freedom papers” that night, when he elected not to explain why he was where he was, when he was; when he chose to confront, and perhaps even fight, this man who followed him in the darkness, he lost his life.

The Sanford Police department seemed to agree with George Zimmerman’s assessment of Trayvon Martin’s alleged out-of-place-ness. As they canvassed the neighborhood trying to verify parts of Zimmerman’s story of what happened that night, they neglected to ask anyone if they knew Trayvon. As a consequence, his body lay in a frigid morgue for three days, identified only as “John Doe.” This was “God’s plan,” George Zimmerman said; this was the space where Trayvon Martin truly belonged.

On the night of February 26, 2012, George Zimmerman decided that Trayvon Martin was not entitled to move freely through space. Like so many African-Americans before him, Trayvon Martin was occupying a space that has never been home to him. He was navigating space in which he has always been unwelcome, in which his existence has always been questionable. He was not entitled to be free without verifying his freedom to a white man who questioned his movement through space. When Zimmerman came upon a black male body that refused to justify its movement through a space that he deemed off limits to it, he enacted a brand of “law and order” which generations of white Southerners have practiced.

Slave passes and freedom papers did not always spare black people from violence or murder, even when moving through space was their only infraction. But the chances that these documents could spare them were high. Trayvon Martin did not justify his right to be where he was, doing what he was doing, and before this verdict, I honestly did not think that he needed to. I now recognize that even if Trayvon had explained why he was walking through Retreat View Circle that night, there is still no guarantee that George Zimmerman would have let him live. Even if he had done everything “right,” there is no guarantee that he would be alive today. But one thing is clear; when George Zimmerman hunted Trayvon Martin in the shadows and took his life on that February night, he exercised the same, virtually unchecked power over black bodies that white Southerners have possessed since slavery. Isn’t it time for us to think about that power and to eradicate it? Isn’t it time to render black movement through space an innocuous and legal act? Yes. Indeed it is.