Peter Dreier is professor of politics and chair of the Urban & Environmental Policy Department at Occidental College. His latest book is "The 100 Greatest Americans of the 20th Century: A Social Justice Hall of Fame" (Nation Books, 2012). 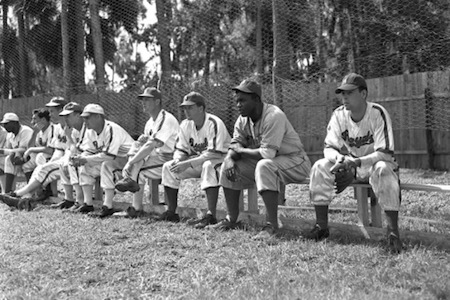 Jackie Robinson with the Montreal Royals during the 1946 spring training season.

I don't know if any of the reporters covering George Zimmerman's trial saw the film 42, but if they had they would have learned something about the racist history of Sanford, Florida, where a six-person jury (five of them white) yesterday acquitted Zimmerman of the shooting death of unarmed black teenager Trayvon Martin.

The film, which came out earlier this year to coincide with the opening of the Major League Baseball season, recounts Jackie Robinson's experience breaking the sport's color barrier. Robinson's brief visit to Sanford is one of the film's most dramatic moments.

After signing Robinson to a contract, Brooklyn Dodgers president Branch Rickey assigned him to Montreal Royals, its top minor league team, for the 1946 season. Rickey figured that Robinson would face less overt racism in Montreal than in most other minor league cities. But he also knew that the Dodgers and the Royals had their spring training camp in Daytona Beach and their pre-training camp (where they gave tryouts to players trying to get a contract) in nearby Sanford which, like the rest of Florida, was racially segregated and governed by Jim Crow laws.

As described in historian Jules Tygiel's Baseball's Great Experiment: Jackie Robinson and His Legacy, Robinson arrived in Sanford in March 1946 after he and his new bride, Rachel, experienced their first taste of Southern racism. After flying from Los Angeles to New Orleans, they were bumped from their connecting flight and were stranded in the New Orleans airport, where none of the restaurants would serve them. They took a later flight to Pensacola, Florida, where they were to get on another connecting flight to Jacksonville. Once on board, they were ordered off the plane and replaced with two white passengers. Furious, they boarded a bus for Jacksonville. On the bus, the driver told them to move to the back of the bus, which (unlike the seats up-front) had no reclining seats. After a long bumpy ride they arrived in Jacksonville and switched to a bus to Daytona Beach, where they were picked up by Wendell Smith (a sportswriter for the Pittsburgh Courier, a prominent black newspaper) and Billy Rowe (the paper's photographer), who drove the Robinsons to Sanford. (Rickey had asked Smith and Rowe to serve as the Robinsons' traveling companions, but the film 42 only focuses on Smith).

But one precedent that wasn't broken was Sanford's segregation laws. Robinson and Wright were not permitted to join their white teammates who were staying at the lakefront Mayfair Hotel, which barred blacks. So Rickey arranged for the two black players -- as well as Robinson's wife Rachel, Smith, and Rowe -- to stay at the Sanford home of David Brock, a local black businessman and doctor.

The Brocks, who lived in a large house, were one of Sanford's few middle-class black families. In Sanford to cover Robinson's historic moment, Bill Mardo, a white sportswriter for the Daily Worker, described the city to his readers.

"Sanford's got the smell. The smell of the South, the silent, lazy and ominous smell of a million lychings that weren't good enough for the pretty palms. Strange Fruit Hangin' on the Poplar Trees," he wrote, referring to the Billie Holiday song about lynching. Mardo visited the city's black section. "Here's where the Negroes live. Here's where every street is a shanty-town. Here's where you walk by and the Negroes look up at you quickly and then away again. Here's where they live and die, some sooner than others."

Robinson and Wright joined their teammates at the Sanford ballpark for the first two days of spring training. But, as depicted in 42, on the evening of the second day, a white man drove to the Brock home and warned Smith, who was sitting on the porch, that a white mob was ready to run the black players out of town. "Other fellas is comin'," he says in the movie, "They ain't too happy about him stayin' here in Sanford. Playin' ball with white boys. Skedaddle, that's what I'd do. If'n they get here, and he's still here, there's gonna be trouble."

According to some accounts, the man was delivering a message from a meeting of about one hundred white Sanford residents, including the mayor. The Ku Klux Klan had a presence in Sanford, so Smith took the threat seriously.

Anyone living in or familiar with Florida at that time knew of the state's long history of racial lynchings. Between 1882 and 1930, Florida mobs lynched 212 blacks. The state had the highest number of lynchings per capita in the nation, according to a study of Southern lynchings. For every 1,250 blacks in Florida during that period, one was lynched, a rate even higher than in Mississippi, Alabama and Georgia. Three lynchings occurred in Florida in the 1940s, including one in 1943, only three years before Robinson's Florida sojourn.

Indeed, white mob violence against African Americans in Florida was widespread during and after World War II. As recounted in Chris Lamb's history of baseball's desegregation, Conspiracy of Silence, in September 1945, a 60-year-old black man who lived near Live Oak, Florida "was removed from is car, pistol-whipped, lynched, and dumped into a river. The suspects, including a police chief, were not indicted." Two weeks later, a white mob in Raiford, Florida (near Tallahassee), kidnapped black teenager Jesse Payne from an unlocked and unguarded jail cell in the middle of the night, shot him to death, and left his body on a highway several miles away.

Smith called Rickey and told him about the threat of violence by the Sanford mob. The Dodger executive told Smith to get Robinson out of town. As depicted in 42, Smith whisked Robinson out of Sanford at night, taking him to Daytona Beach. (The film ignores Wright entirely and puts Robinson in Smith's car without his wife Rachel). In Daytona Beach, too, the Robinsons, barred from the all-whites hotel where the other Royals were staying, had to board with a local black politician.

So it was in Daytona Beach, on March 17, 1946, that Robinson played his first minor league game, an exhibition between the Royals and the Dodgers. To the surprise of some, local officials allowed the teams to play despite the Jim Crow laws. Four thousand spectators -- a quarter of them African Americans, confined to a segregated section of the seats -- crowded into the ballpark to watch this historic event.

But they had no such luck in Sanford. On April 7, the Royals returned to Sanford to play an exhibition game against the St. Paul Saints. According to Tygiel, "City officials asked Rickey to leave the black second baseman at the Dodger camp. Rickey ignored the request and the Royals again boarded their little-used bus for the twenty-mile ride to Sanford."

The Royals put Robinson in the starting lineup and he beat out an infield single in the first inning, then stole second base. But in the bottom of the second inning, the Sanford police chief walked onto the field and ordered Royals manager Clay Hopper to remove Robinson and Wright from the stadium. (This scene, too, is depicted in 42).

After that incident, Rickey refused to allow the Royals to play in any city that barred his black players, so the spring training included a few cancelled games; instead, the Royals moved their road games to their home field in Daytona Beach, which was segregated but somewhat more racially tolerant than other Florida locales. Worried that barring black players from playing there would generate bad publicity and hurt the city's ability to attract northern tourists, local officials negotiated with Rickey to permit Robinson to join his Royals teammates on the field.

Julian Stenstrom, sports editor of the Sanford Herald, completely ignored Robinson's presence in Sanford. Remarkably, Sanford - which calls itself the "friendly city" - has an honest, although somewhat santized, version of this story on its official website.

After spring training ended, Robinson played for the Royals during the 1946 season. He led the International League with a .349 batting average and 113 runs, finished second with 40 stolen bases, and led the team to a 100-54 season and a triumph in the minor league World Series. The next season, promoted to the Brooklyn Dodgers, Robinson was named Rookie of the Year and two years later was chosen the National League's Most Valuable Player. He spent his entire major league career (1947 to 1956) with the Dodgers, had a .311 lifetime batting average, he led the Dodgers to six pennants, and was elected to the Hall of Fame in 1962. During his playing days, and after his retirement, until his death in 1972, Robinson was an outspoken activist for civil rights. He walked picket lines, raised money for the NAACP, and pushed hard to desegregate American society and baseball's management ranks.

Neither of the Robinsons would ever forget their Florida ordeal. Jackie Robinson wrote about it, his anger still palpable, in his autobiography. Rachel Robinson told Arnold Rampersad, author of Jackie Robinson: A Biography, that their experiences in Florida that spring made her "a much stronger, more purposeful human being." She said: "I saw the pointlessness, the vanity, of good looks and clothes when one faced an evil like Jim Crow. I think I was much more ready now to deal with the world we had entered."

Now, sixty-seven years later, America confronts the world that Trayvon Martin entered when he walked down a sidewalk in a white gated community in Sanford, wearing a gray hooded sweatshirt and carrying a bag of Skittles, and met a white man with a gun and a head full of stereotypes.