How Ian Fleming Masterminded the Invasion of Sicily

Daniel Mandel is a Fellow in History at Melbourne University and author of H. V. Evatt and the Establishment of Israel: The Undercover Zionist (Routledge, London, 2004). 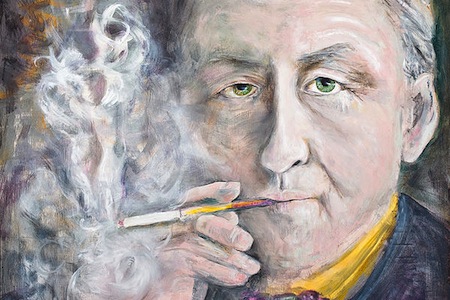 World War II abounds in gargantuan invasions, massive blunders, ferocious set-piece battles and scenes of hellish slaughter worthy of Hieronymus Bosch. The effort to avoid one such bloodbath originated Operation Mincemeat, one of the war's most celebrated and quirky intelligence efforts. Specifically, the conundrum for the Allies was: how to save the lives of thousands of soldiers to be landed in Europe on heavily-defended Axis beachheads?

The beaches in question were not those of Normandy on June 6, 1944, but of Sicily on July 9, 1943, seventy years ago today. British and American forces, fresh from having driven Field Marshal Erwin Rommel's panzer divisions from North Africa, were poised to assault what British Prime Minister Winston Churchill called “the soft underbelly of Europe.”

The target was Mussolini’s Italy, with Sicily the ideal -- but painfully obvious -- invasion point. How might the Germans be deflected from heavily reinforcing the island’s defenses?

The stakes were high. A failed invasion would prolong the war, perhaps by years. As yet, much of the little experience the Allies had in invasions of this type was bad. D-Day and the great amphibious landings in the Pacific still lay in the future. The British had botched an invasion of Norway in April 1940 to forestall a German occupation. The Dieppe raid of August 1942 had proved a fiasco. The U.S. landings at Guadalcanal the same month had been costly and the fighting protracted. The Anglo-American landings in North Africa in November 1942 had been successful, but had been opposed only by comparatively light Vichy French resistance. And World War I provided memories only of such catastrophes as Gallipoli. In short, there was no reassuring precedent for a large-scale, swift and successful assault of this kind. The invasion of Sicily was going to need all the assistance that the arts of deception could provide.

The obvious solution was to deceive the Germans into believing that the invasion of southern Europe would occur elsewhere; Greece, in the eastern Mediterranean, or Sardinia and Corsica in the west. However, not only would this be a hard sell on the merits, but there was also the dear, deadly little question of how to do it.

Deception was also a two-edged sword; the slightest slip in execution could mean confirming the Germans in their suspicions that Sicily was indeed the target, magnifying the prospects of failure. Moreover, the Germans could be expected to be more than usually suspicious. The British had a tradition of planting false documents going back to the "haversack ruse" of 1917, when the British dropped a haversack of fake documents in Turkish territory with the aim of misleading the Turks and their German allies into thinking that British forces would not attack Beersheba.

With World War II, the idea was refined to planting false documents on a dead body. The idea stemmed from an obscure detective novel, The Milliner’s Hat Mystery (1937) by Sir Basil Thomson, the former head of London’s Criminal Investigation Department. Largely and perhaps deservedly forgotten today, Thomson’s novels however were read by a certain Royal Navy intelligence officer by the name of Ian Fleming. The future creator of James Bond, Fleming was transfixed by the premise of The Milliner’s Hat Mystery: a body is found whose identity, reconstructed from his personal effects, turns out to be a complete fabrication. In a top secret memo following the outbreak of war in September 1939, Fleming wrote to his superior, Admiral John Godfrey, the Director of Naval Intelligence (who served as the model for "M" in Fleming’s James Bond novels), suggesting numerous devices to deceive the Germans, one of which included an elaboration of Thomson’s premise: a corpse carrying fabricated documents would be dropped by parachute on a German-occupied coast. Godfrey had approved the idea.

In August 1942, the British had planted false documents on a corpse before the battle of Alam Halfa, which had misled Rommel’s tanks. The following month, the Germans had been suspicious enough of British tricks to ignore actually true information regarding French agents operating in North Africa that came their way when the body of a British courier lost in a plane crash at sea off Cadiz washed up on a Spanish beach.

Given this record, it is remarkable that the British thought they even stood of a ghost of a chance with another exercise of this kind. But the high stakes demanded such an effort be made and history vindicated their decision to try.

The job of coming up with a deception plan fell to a small inter-departmental intelligence team, the Twenty Committee, which specialized in producing double agents (The Twenty Committee was often identified by the symbols XX, standing for double cross). In particular, it involved two men, a peacetime lawyer and Royal Navy Lieutenant Commander Ewen Montagu and Royal Air Force Flight Lieutenant Charles Cholmondeley. Cholmondeley first reprised Fleming's idea of a parachuted corpse, but that was impracticable; it would be easily detected that the man had been dead before hitting the ground. Consultation with the greatest pathologist of the day, Sir Bernard Spilsbury, revealed the best chance of deceiving the Germans with a pre-deceased corpse lay in using one that had died of pneumonia, which would produce effects sufficiently consistent with death by drowning. From that point, it was a short leap to the idea of an officer washed up on a beach following his death by drowning in a plane crash at sea. Finding a suitable corpse that no-one wanted or would miss proved almost insurmountable, but when a Welsh vagrant without living parents or known relatives named Glyndwr Michael was found dead from ingesting phosphorous-laced rat poison, Montagu and Cholmondeley had their body.

In due course, the unfortunate and forgotten Gleyndwr Michael was attired as an acting major in the Royal Marines named William Martin. The accoutrements of a plausible personality -- letters from a father, bank manager and girlfriend (including a photo of the girl belonging in reality to a young MI5 clerk), theater ticket stubs, a wallet, outstanding bills, various forms of identification, and so on -- were forged with great care. Following this absorbing exercise in verisimilitude, fabricated letters signed by Lieutenant-General Archibald Nye, Vice Chief of the Imperial General Staff, and Vice-Admiral Louis Mountbatten, the head of Combined Operations, addressed to senior allied commanders in North Africa, was placed in a briefcase attached by chain to "Major Martin." The letters imparted detail and allusions pointing to an upcoming Anglo-American invasion of Greece and Sardinia, with Sicily being a decoy target.

Duly prepared for his mission, "Major Martin" was then packed in dry ice for preservation and transported by the British submarine, HMS Seraph, off the Spanish coast near the port of Punta Umbria in the province of Huelva, where he was cast adrift in the dead of night on April 30, 1943. As predicted, strong on-shore currents and prevailing winds duly washed "Major Martin" ashore where he came into the hands of the Spanish authorities -- and the district Nazi spy ring. Pleas to the Spaniards from German military intelligence head, Admiral Wilhelm Canaris, resulted in the Spaniards turning over the letters to the Germans for copying before the corpse was buried and his effects, including the letters -- extracted, photographed and replaced in their envelopes without visible signs -- returned to the British.

It worked. Adolf Hitler issued an order on May 12, 1943 stating that "Measures regarding Sardinia and the Peloponnese take precedence over everything else." The defenses on Sicily were thinned; panzer divisions (including two from the vital Eastern front), patrol boats, minesweepers and other forces were dispatched to Greece and Sardinia. Rommel was even dispatched to assume command of German forces in Greece. Accordingly, resistance encountered by the Allied invasion force on July 9 was relatively weak and within a month, Sicily was in Allied hands.

And yet, much could have gone wrong. Glyndwr Michael's corpse had decayed far in excess of what could have been expected from a corpse adrift for only a few days, yet the Spanish coroners drew no pertinent deductions. Nor did the Germans, though their own, partly mistaken reconstruction of "Major Martin’s" movements should have inspired doubts. Nor had Montagu and Cholmondeley’s imaginatively brilliant work been utterly flawless. One of the bills on the corpse included a receipt for cash for shirts purchased at Gieves and Hawkes -- a store which always sold to officers on credit. Moreover, in retrospect, the picture presented by "Major Martin" verged on the stereotypical and was additionally too neat; every item on his person made sense or served a purpose. There was no miscellany -- an unexplained hairpin, an incomprehensible scribbled note, an utterly mismatched item -- such as would most likely appear on a random corpse. But their imaginative creation nonetheless proved good enough to dispel any German suspicions.

With official approval on condition of some discretion, Montagu later wrote a best-selling, sometimes reticent and occasionally misleading account of the episode in a 1953 book, The Man Who Never Was, which was turned into an entertaining film of the same name in 1956, starring Clifton Webb as Montagu (and featuring at one point a cameo by Montagu himself). The film featured for dramatic purposes various fictitious episodes, including the dispatch to Britain of a pro-Nazi Irish agent to verify the William Martin story, something which, as Montagu put it in a letter to me in 1983, “we did not really expect in the then existing circumstances.” Had the Germans harbored suspicions, something of the kind might have followed, but the evidence, now on display in Ben Macintyre’s 2010 book, Operation Mincemeat: How a Dead Man and a Bizarre Plan Fooled the Nazis and Assured an Allied Victory, shows that the Germans had been, as Montagu put it, “completely deceived” by Mincemeat. In short, it was an unqualified success and many an allied soldier survived the Sicily landings on this day seventy years ago because of it.