The Real Story of the MS St. Louis

Richard Breitman and Allan J. Lichtman are Distinguished Professors of History at American University in Washington, D.C. They are the authors of "FDR and the Jews" (Belknap, 2013). 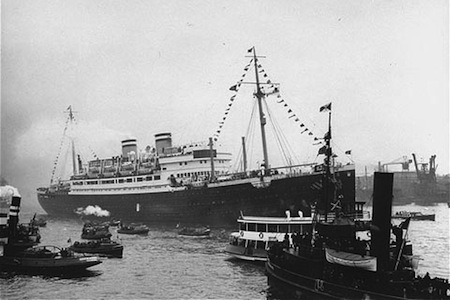 Critics of Franklin Delano Roosevelt often use the ship the St. Louis as an emblem of FDR’s alleged indifference toward the Holocaust. In Hollywood’s version, now deeply engrained in American popular culture, the 937 German-Jewish passengers of the MS St. Louis undertook the “voyage of the damned.” The president could have saved them and did nothing. As a result, most of them perished.

In our new book FDR and the Jews, we noted in passing that American officials did not order the Coast Guard to prevent the St. Louis from landing in the United States. Since our book appeared a few months ago our critics in the press -- and some surviving St. Louis passengers -- have complained about this particular statement.

We do not dispute the recollections of St. Louis survivors that they saw and heard Coast Guard vessels while the ship steamed in waters near Florida. But the survivors could not have known the real mission of the Coast Guard.

Our work also reveals that the pre-history of this May-June 1939 voyage dates back to the previous year, and it hardly demonstrates American indifference toward the fate of Jews in Germany. The St. Louis never would have journeyed to Cuba with Jewish refugees aboard if not for successful prior initiatives of the Roosevelt administration.

Following the Nazi pogrom in known as the Night of Broken Glass (Kristallnacht in German) in November 1938, the Roosevelt administration pushed to find havens for German and Austrian Jews in Latin American countries, especially Cuba. After meeting with President Roosevelt in Washington, Cuban strongman Fulgencio Batista announced that he was "deeply moved by the sad plight of the political refugees" and that Cuban officials “would heartily cooperate with President Roosevelt in his plan to relieve the terrible situation abroad.”

The authors discuss the true story of the MS St. Louis

Undersecretary of State Sumner Welles, FDR’s man in the State Department, asked all U.S. ambassadors in Latin America to communicate the administration’s interest in providing places of refuge for persecuted Jews. Perhaps as a quid pro quo, Batista won the administration’s agreement to reduce the tariff on Cuban sugar and to back economic, technical, and military assistance to his government.

The American immigration quota for Germany was then filled, and only an unsympathetic Congress could raise it. Several hundred thousand German Jews clustered on a ten-year waiting list for American visas. If they got out of Germany, wherever they went, they could wait their turn to enter the U.S. under the substantial German quota. Hence their interest in getting to Cuba.

In turn, Cuban officials profited by charging heavy fees for visas or tourist landing permits. By the summer of 1939, estimates of the total number of German-Jewish refugees in Cuba ranged from 5,000 to 6,000 in a country with a population of about 4.5 million.

Most of the 937 passengers on the St. Louis, which sailed from Hamburg on May 13, had what they thought were valid Cuban tourist landing permits, purchased from the German shipping line Hapag. While the ship was en route, the Cuban government, in response to pressures from Cuban anti-Semites, invalidated these tourist documents. Two additional ships with smaller numbers of refugees who had similar documents and problems arrived within days. They departed without leaving passengers in Havana, but the St. Louis remained.

If forced back to Germany, the St. Louis passengers faced the grim fate of imprisonment in concentration camps -- extermination camps would not exist for another two and one-half years. One veteran of Buchenwald slit his wrists and plunged into the harbor. The international press picked up a political story with spectacular human interest.

As the German captain of the St. Louis marked time for a few days by sailing along the Florida coast, telegrams from friends and relatives of passengers bombarded the White House and the State Department. Some wanted the U.S. to pressure Cuba; others wanted the U.S. to admit the passengers, at least temporarily.

Roosevelt was in Hyde Park when the deadlock in Havana harbor occurred. After he returned to Washington on May 31, illness confined him to his room for several days. Undersecretary Welles, a veteran of dealing with difficult and corrupt Cuban regimes, knew that an official American attempt to force Cuban acceptance of the St. Louis passengers would have ruined FDR’s Good Neighbor Policy and undermined America’s standing in Latin America generally at a time when war seemed near.

Welles and FDR also knew that any attempt to admit the passengers to America in violation of the quota limits and ahead of others on the waiting list would have jeopardized their top priority of getting Congress to ease the restrictive neutrality laws. This was a prerequisite to aiding nations resisting Nazi aggression in the event of war.

Once the ship meandered toward Miami, the Coast Guard began to track it. The Coast Guard had no reason to prevent it from landing at an American port: the passengers lacked American visas and could not enter or stay. There was no political asylum for refugees at that time. The official history of the Coast Guard indicates that Coast Guard ships had no orders to prevent a landing. High American officials still expected the Cubans to relent, so there was no need for another solution.

The State Department rejected as illegal a proposal for using the Virgin Islands as a holding area: the Virgin Islands could not take in tourists who lacked a permanent home to which they could return. But as late as June 5, the Cuban ambassador believed that his country would soon accept the passengers given sufficient financing.

After the Joint Distribution Committee, which was negotiating on behalf of the passengers, lost contact with the ship, Secretary of the Treasury Henry Morgenthau, Jr. -- the only Jew in Roosevelt’s cabinet -- asked the Coast Guard to locate and track it without any publicity. Phone transcripts reveal clearly that Morgenthau intended to keep the ship in sight during negotiations to find refuge for the passengers, in Cuba or elsewhere.

Secretary Morgenthau: I’ve seen in the papers that out of Ft. Lauderdale you’ve been tracking the German ship, the St. Louis.

Secretary Morgenthau: Do you know where she’s located now?

Commander Rose: I haven’t seen anything on it today, but I believe the first was off Miami, and the vessel turned back from trailing her somewhere down toward Key West.

Secretary Morgenthau: Well, I’d--- I’d like to know if you can find out where she is. Hello?

Secretary Morgenthau: I don’t—I want you to treat it confidentially, you see, so that nothing gets out that I’m interested.

Secretary Morgenthau: But I -- I spoke to Secretary Hull about it, and I understand they can’t locate the boat, you see?

Secretary Morgenthau: Now, I’d like -- if you can handle this mission confidentially send a -- radio [message] both to Lauderdale and Miami, would you?... but handle the thing so that there will be no kickback and no publicity on it….. But handle it so that there’s no comeback on it, please.

Commander Rose: All right, sir. I’ll take care of that.

Secretary Morgenthau: You can understand.

Secretary Morgenthau: But I want -- I want to locate it.

Commander Rose: All right, sir, we’ll do all we can.

Morgenthau’s sympathetic intervention remained unknown to some surviving St. Louis passengers nearly seventy-five years later. He knew that negotiations were underway, and he wanted the ship to head for the right haven.

The negotiations succeeded. Advocates for refugees, assisted by the Intergovernmental Committee on Refugees, a Roosevelt initiative, and the State Department found places for all the St. Louis passengers in Belgium, France, the Netherlands, and Britain. These were safe havens in the summer of 1939, a time when the war and the Holocaust had not begun. Not a single passenger went back to Germany.

Tragically, the ill fortune of war and the Holocaust later threatened those passengers placed on the continent and caught up about one-third of them. But only those who could magically see into the future could have forecast this in the prewar summer or 1939. “Our gratitude is as immense as the ocean on which we are now floating,” the passengers cabled at the time to a Jewish aid official.

About two-thirds of the original St. Louis passengers survived the Holocaust and half of them eventually immigrated into the United States. But for initiatives of the Roosevelt administration, they would not have made it to America, nor would 5,000-6,000 other German Jews have found safe haven in Cuba.